The State of Eco-Friendly Surfboards with Ryan Lynch of Timber Surf Co. 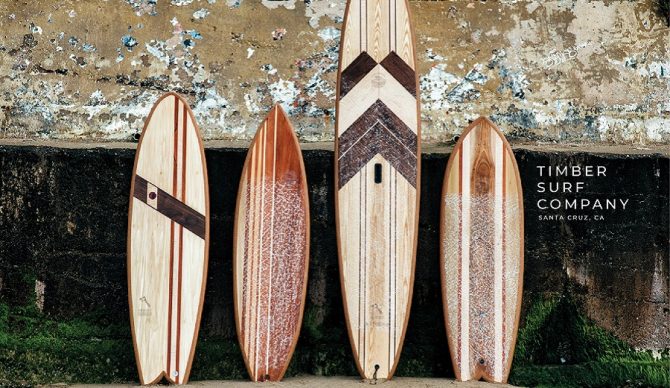 Surfboards are pretty difficult to produce. There’s a million and one nasty chemicals that go into every aspect of the board-building process, and materials are sourced from all over the world. And once built, surfboards are very, very difficult to recycle or dispose of cleanly. But it doesn’t have to be that way. If you’re willing to put in the effort to find locally sourced, sustainable materials, and think outside the box, eco-friendly surfboards are absolutely within reach. That’s exactly what Ryan Lynch is doing at Timber Surf Co. in Santa Cruz, Calif. Ryan uses wood from fallen redwood trees in the Santa Cruz mountains to make his boards, as well as low-density EPS foam and bio-resin. And the finished product is a high-performance and long-lasting surfboard that both Ryan and the customer can feel good about. I got Ryan on the phone to hear more about his operation down in Santa Cruz, and the state of eco-surfboards more generally. Read on.

One thing I feel like I’m always hearing is how EPS is more eco friendly than polyurethane foam, but I’ve never heard a ton of specifics. Mind clearing that up for us?

Absolutely. So comparing EPS to polyurethane in general, the story is polyurethane performs better, but it performs that way for a much shorter life cycle. Every time you flex and compress a polyurethane board, it’s actually fracturing and breaking on the inside. So that’s why your traditional polyurethane board is gonna lose its function and feel dead after one or two seasons, for professional guys, after one or two weeks. Expanded Polystyrene/EPS has a little less spring back – it doesn’t snap back at the split second in quite the way that polyurethane does – but it never loses that mechanical property. So over the lifetime of an EPS board, it will always feel the same and perform the same, giving it a much longer functional lifespan. 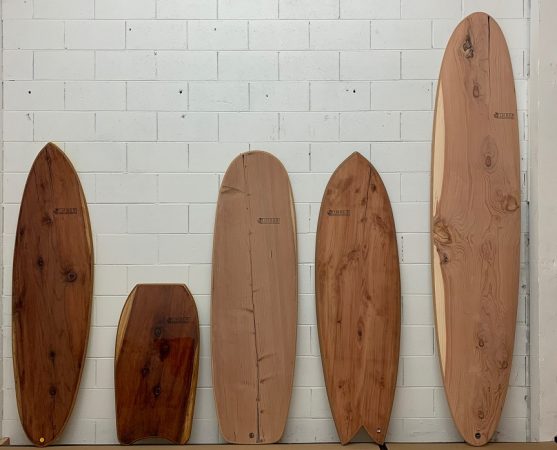 You spent some time working at Tesla before going into sustainable surfboard design. Tell us about that and how it influenced your surfboard shaping?

At Tesla, I spent a lot of time working with the design team doing work on material design, a lot of textile and non-woven material development several years ahead of product launches. So not like getting a car off the ground but making sure everything is really well styled and defined and has the possibility of being produced at scale.

The most applicable lesson I learned from Tesla was craftsmanship. That’s basically the ethos of my brand, aside from building a better, more environmentally friendly surfboard. Like everything needs to be dialed in completely and perfectly assembled. If there’s a mistake we stop and take way more time then someone else would to make sure that thing gets covered up and treated. The idea is that you spend a ton of time and effort and money up front to ensure you’re making the right decisions and everything is as beautiful and functional as it can be. 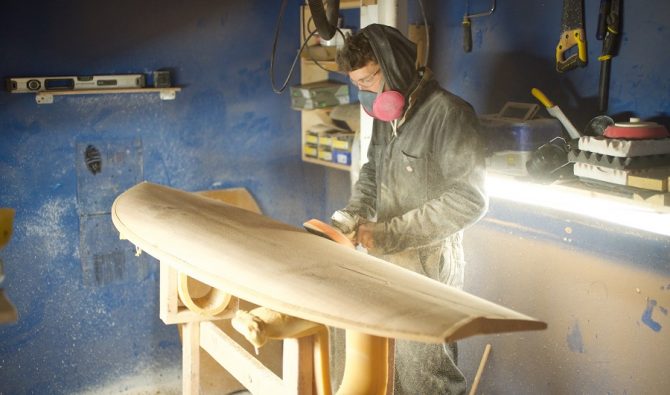 Why don’t you tell us a little bit more about your process?

So in the first place, our business started with hollow boards. And that was to make the most eco-friendly board possible in my eyes. A lot of fun, but there were a couple problems. It was really hard to find a customer every month, you know, one month per board, basically. And then at that kind of scale of one board a month, you’re really not making a big impact. You’re doing a cool thing, and it tells a story, but there’s not much of a leverage point to change the industry or to influence the customer base by doing that. And to be honest, they don’t perform all that well, they’re heavy and just different from a normal surfboard. So after a year of doing that I pivoted the business to offer what I call the Splinter Series board. And that is a low density EPS foam core that is wrapped in a vacuum bag with both cork and wood, and is unlike any other wood board out there on the market. Most “wooden” surfboards are actually just a wood veneer, which takes a ton of energy and water to produce, and is more paper and glue than wood so it doesn’t do much for the board besides appearance.

So I went a different route — really relying on the wood, not just as a design element, but as a functional element of the board. I use a substantial piece of slab-cut redwood that’s an eighth of an inch thick. Cut straight through the trunk of a tree, and we only use fallen redwoods from right here in the Santa Cruz Mountains. With all that thickness, it’s actually providing strength to the board, and controls the flex pattern differently. We don’t rely on fiberglass to do that and only need to use about 40 percent of the fiberglass compared to a conventional board, and about 40-50 percent of the resin, which all reduces the footprint of the board by reducing the synthetic material that goes into it. And it’s actually measurable. There is some immeasurable stuff as well, such as how long the board lasts – for example our boards don’t really pressure dent, and will work the same in 10 years as the day you bought it.

Furthermore, we try to source our material as locally as possible — the wood comes from fallen trees in the Santa Cruz mountains, the foam is made in California, our glues are water-based glues – the only thing we can’t source locally is the cork, but that’s because most of the cork in the world comes from Portugal. Paying attention to that stuff matters, because when you’re manufacturing something as complex as a surfboard, the impact adds up if you aren’t careful about where your materials come from. 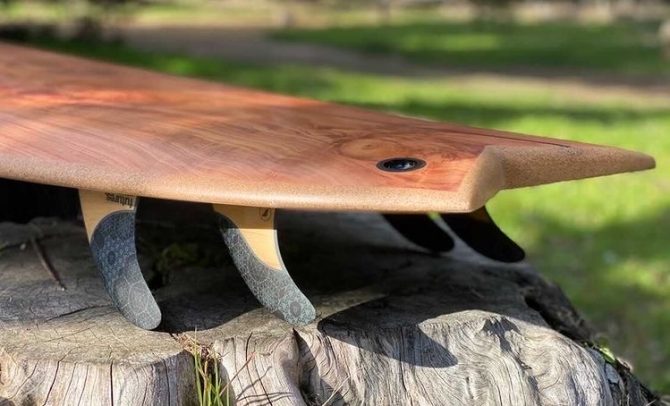 Lets dive into the term eco friendly, specifically eco-friendly surfboards. What does that mean? Both to you and your brand and the industry as a whole?

Well, it has to be said that there is no such thing as a zero waste or fully environmentally friendly surfboard. Even when I’m making a completely hollow core wood board, I’m making a product and putting something out into the world which is utilizing resources and taxing the environment. So I think that draws one to evaluate the materials and understand what’s available and make the best choices with the environment in mind that you possibly can with the materials that are available to you. And that changes region by region. So here in the States, we do not have access to “eco blanks.”

Elsewhere in the world, they have access to environmentally friendly blanks like algae bloom, mushroom core, even flax blanks. All those things are coming to the States, but currently, they’re out of reach. I mean yes, I could go to Europe and buy a few of those blanks and bring them back here, but at what point are you losing the environmental value of those materials by flying across the planet to get that resource? So we do the best we can. The EPS we use is 100 percent recyclable, the resins are 35 percent tree-sap based, glues are water-based, you just have to do the homework.

And then lastly, you can innovate — a long time ago, someone decided that they could make a different kind of foam than polystyrene, and they spent a whole lot of time and money to make a better foam solution. And it’s not a great foam solution, but it is better, and so if someone else improves that, and makes an even better foam solution, that’s progress. Everything takes innovation, and you can’t just do what everyone else is doing. You have to be willing to give it time and effort and make incremental steps forward. I think that’s the best that we can reasonably do. 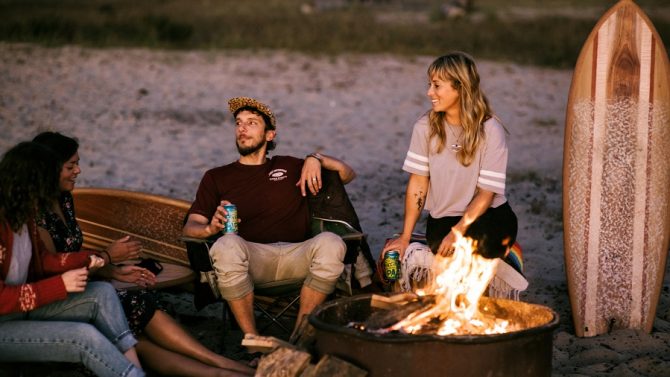 And so that’s what you feel like you’re doing with your boards? Not making a perfectly eco-friendly surfboard, but pushing the envelope a bit, innovating a bit, and trying to change the industry in that way.

Yeah, definitely. I don’t expect to ever be a big manufacturer. That’s not the goal. The goal is to communicate with the consumer and open their eyes and educate them a little bit about what goes into the products that you’re so used to just buying off the shelf without much thought. Customers need to be informed, because there can always be so much greenwashing put on things. And I’m an open book to any customers that are asking or any other businesses that are interested in doing things my way. I’d be so stoked if the big guys were to take some element of what I’m doing and adopt it into their own practices. I’d see that as a huge win. And I’m really trying to do things differently. You know, I have a goal to make a board without resin whatsoever. I have some some prototypes that I’m working on that are ready for my own use, but is by no means ready to be sold to the world. But that’s the goal, to do things differently, and simultaneously do things better and more responsibly. It’s such a winning scenario and very fulfilling, at least from my perspective.