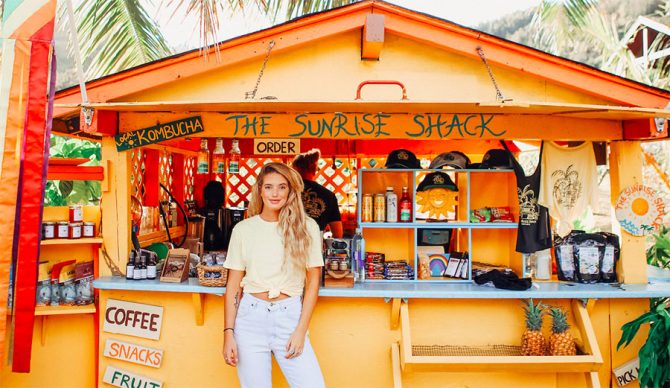 Bright colors and good food have helped the Sunrise Shack stand out. So have employees like Lacey Douglas Photo: Courtesy Lacey Douglas

Tucked away on the North Shore of Oahu near the Sunset parking lot is a funky yellow shack, serving up some of the best and healthiest food on the island. Perhaps you’ve seen a photo of it? Maybe you’ve driven by it? If you’re lucky, you’ve had the chance to stop for a bite or a drink.

But the Sunrise Shack is so much more than just a photo destination. Founded by professional surfers and brothers Alex, Travis, and Koa Smith, alongside their close friend Koa Rothman, the Sunrise Shack began as a spot to fuel up before surfs and grew into more than the founders could have ever dreamed of.

Born and raised on a farm on Kauai, healthy eating was a part of the Smith brother’s way of life since day one, and it was something they took for granted. As they began traveling the world for surf competitions, they found that healthy food wasn’t readily available in many corners of the globe.

Instilled with an entrepreneurial mindset from their parents and a mission to make healthy food more accessible, the brothers were constantly experimenting with new business ideas and health hacks. During a stint in New York, Travis Smith discovered bulletproof coffee and began selling it at local farmer’s markets. The coffee was an instant hit. So, Travis pitched the idea of opening a shack on Oahu to his brothers and Rothman and they decided to give it a go.

“We weren’t happy with the food options on the North Shore and to surf big waves like Pipe you want to feel the best you can with as much energy as possible,” says Koa Smith. “We really love the bullet coffee for that. It gives you hyper focus, you feel really good, and the energy lasts a really long time.”

When they first opened the Shack in 2016, the menu simply offered bulletproof coffees and superfood teas. The coffee was a hit but at $12 each, the teas were a bust. After considering customer feedback and some experimentation, they landed on their current menu, which includes coffees, papaya bowls, smoothies, and acai bowls. 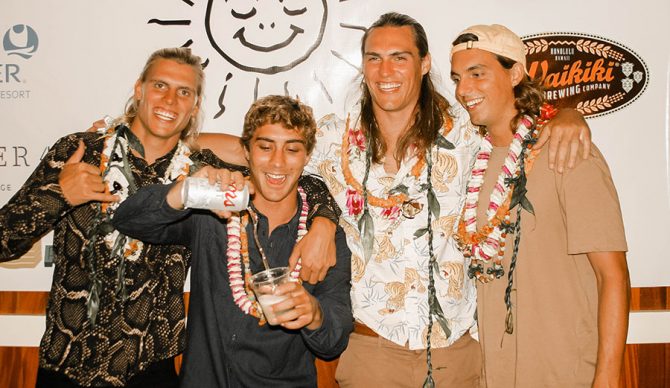 The founders wanted the Shack to radiate positive vibes and happiness, so they painted it bright yellow and orange. A friend designed fun signs with positive sayings like “today is a good day,” “rise with the sun,” and “wake up in paradise.” Shortly after they opened, an Instagram influencer posted a photo holding a pineapple in front of the shack and it blew up on social media. Suddenly, the Sunrise Shack was a photo destination.

“None of it was planned,” says Alex Smith. “We weren’t thinking about social media or photos — we just wanted to make it fun, bright, and happy. It was purely from the soul in the moment; it all happened very naturally.”

Once the shack became labeled as a photo destination, the brothers decided to run with it. They crafted their menu items to be photogenic as well, offering bright, colorful smoothies and bowls adorned with tropical fruits. Eventually, they added eye-catching merchandise, available at their retail locations and online.

“We’ve tried so many things and all done things on our own,” says Travis Smith. “But we realized when you bring three brothers together it can amplify the brand or the concept. We all have so many different skillsets to offer.”

The Sunrise Shack is a family operation through and through. Plus, Koa Rothman. Travis Smith was the shack’s first employee and helps steer the ship alongside CEO Anthony Thomas, filling in wherever he’s needed. Alex Smith manages marketing as well as food design and all things creative. A North Shore native, Koa Rothman helps scout out potential shack locations. Additionally, he represents and brings awareness to the shack through his surfing, alongside Koa Smith. Mamma and Pappa Smith are part of the business as well, lending a helping hand wherever they can.

In an effort to be as healthy and sustainable as possible, the founders do their best to use quality ingredients in their food and beverages. The granola is organic, gluten free, nut free, and vegan and the bread is homemade and organic. Although they can’t source all of the fruit locally, the goal is to buy as much local and organic produce as possible with the dream of someday owning their own farm.

Since opening its doors in 2016, the Shack has expanded tremendously. There are now three Sunrise Shack locations in Japan as well as four on Oahu: Sunset Beach, Shark’s Cove, Waikiki, and Kailua. There isn’t a set goal, but the plan is to continue planting seeds of sunshine in additional locations to make healthy food more readily available. If you’ve been to one of the Shacks, then you know it’s safe to say: mission accomplished.