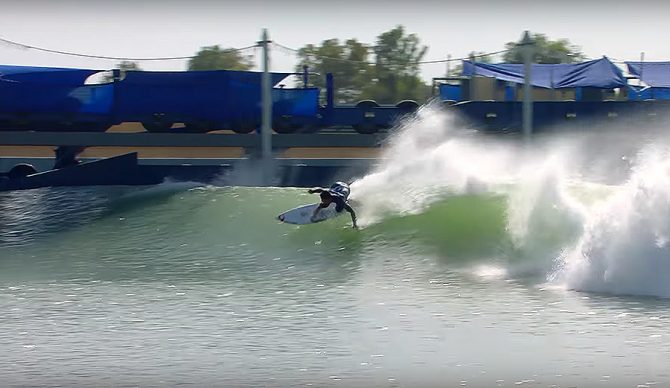 The Dream Tour is reserved for the best surfers on the best waves. And now that the tech is here, why not take the “grind” away from QS grinders?

It can be said that something’s missing amongst the roster of athletes circumnavigating the globe under the banner of “the top 34.” The idea here is that the competitors on tour are certainly good, but perhaps they’re not the very best. And if they’re going to be the “top 34,” it’s fair to expect they should be the very best.

There are a few things that can explain this. Competition isn’t for everyone. A few of the world’s greatest talents choose to showcase their surfing in different ways and they have accomplished careers without chasing heat scores and wearing jerseys. They simply don’t seek the judges’ affirmation of their place in the sport. Fine. But what about those that do want to compete? Why are some unable to launch a career in competitive surfing’s highest ranks?

As far as I can tell, there are two reasons for this. First, the cost of launching a successful attempt at qualification and second, QS events are often held in substandard conditions which don’t give the best surfers the best chance to showcase their talent.

It’s well known that traveling the world to collect QS points is an expensive task. That’s not as big a problem for those fortunate enough to have the backing of a deep-pocketed sponsor. But it is a big task for those self-financing a burgeoning career. A sport that for so long has prided itself on its humble roots is in danger of going the way of upper-middle-class pursuits like tennis and golf, where financial viability can overtake raw talent as the prerequisite for success.

And how about the location factor of the QS events? Why are those trying to break into the world’s elite regularly doing so in sub-par conditions? Time and money are again likely explanations. The organizers of the QS competitions more often than not find themselves with short windows in which to run heats. That’s a luxury afforded on the dream tour, though, where time is available to put contests on hold during long contest windows. Organizers can wait for the best conditions, which is not an option for those further down the competitive surfing food chain.

Now, if only we had somewhere with quality waves on tap that anybody could access. Somewhere that churned out perfection at the touch of a button. Waves that were so consistent they’d offer a level playing field to all of surfing’s rawest talent. These conditions could allow CT hopefuls an opportunity to assert their worthiness for a place amongst the world elite.

Thanks to the King, such a place does exist. So here’s my suggestion: A one off invitational event for CT hopefuls. A panel selects a field of competitors, comprised of the current stand out surfers ripping it up in all the right places but failing to find traction on the QS. The winner of the event takes home the ultimate prize: a place on the dream tour. This is the chance to bypass months of slogging around the lower tiers of competitive surfing. It’s a chance to avoid racking up thousands of dollars of debt chasing a dream. And most importantly, it’s a chance to allow raw talent to shine through.

It would be interesting to see how these surfers might progress on tour. They could plummet down the rankings, proving that the current system does in fact work and we are already witnessing the best competitors in the sport. Or would these golden ticket tour winners rattle a few cages? Would those surfers currently scratching around the lower echelons of the top 34 be looking over their shoulders a little more often for fear of losing ground to a frothing grom?

So click your fingers, Kelly. Make it happen. Smash the boundaries of competitive surfing one more time.

Editor’s Note: This article was first featured on surfingsections.com