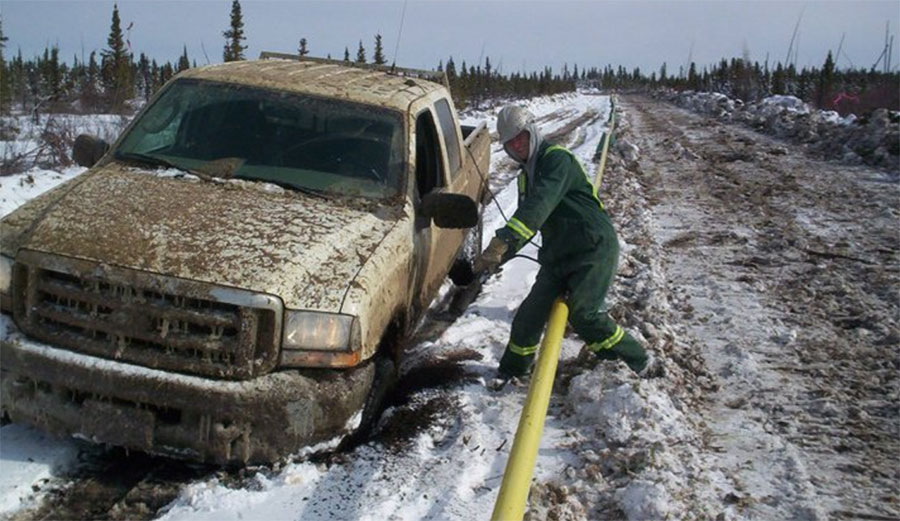 The frozen swamp was not quite frozen yet. Bad job #100, but not the job that got shit in my mouth.

I’ve done a lot of shitty jobs in my life, usually in the pursuit of financing a surf trip. They’ve all been jobs that pay fantastically well for a few short months of dirty, difficult work. I’ve been a filthy, stinking tree planter. I’ve worked on pipelines in Northern British Columbia, stumbling down right-of-ways at 5 a.m. in -40 Celsius. I’ve been a wildland firefighter, inhaling vast amounts of smoke and sleeping in my boots, chewing can after can of Copenhagen and rolling drum tobacco in the dirt.

I’ve worked fall-and-burn, dumping beetle-killed trees into enormous piles and lighting them ablaze. I was a snag-faller, going into areas after a wildfire ripped through and cutting down burned-out trees that posed a danger to the fire crews that followed.

But by far, the worst job I’ve ever done to spend a few months sliding around on warm waves was the installation and maintenance of plumbing on rig shacks. Sounds pretty benign, doesn’t it? Let me tell you, it is not. Ever had the liquified shit of a large, fat man who’s been eating camp food for a month sprayed at high-velocity directly into your face? Was it worth it? Probably.

I had been living in a town called Fort St. John in the far north of British Columbia. I’d moved there for work on a bit of a drunken whim – a few of us piled into an old pickup truck one day and headed up there to see what we could find. We were after anything to make a few extra bucks quick to head somewhere hot with good waves for a few months of drunken, sunburned debauchery. It’s a small, rough town, full of rough men with too much money. It’s hot and dusty in the summer and colder than a freezer in the winter. There are labor jobs aplenty there beneath that giant sky. The country surrounding the town is pockmarked with old oil leases, the horizon lit up at night with flare stacks burning off the unusable waste gasses that are produced in the oil refinery business.

I met a girl who was there for much the same reasons as me. She, like many of the transient workers there (me included), didn’t fit in with the people who called the place home. Covered in tattoos, creative as the day is long, and a fantastic writer, she found work in restaurants and bars that catered to oil workers spending their money on their days off. A month of 12-to-16 hour days in a dry camp inevitably leads to at least a few nights of ridiculous spending, and the tips a pretty girl can earn there are good, to say the least. As it turned out, her father, a tall man with a huge mustache and the kind of demeanor that makes his daughter’s boyfriend genuinely worried for his life, worked for a company that installed plumbing.

He got me a job, and it did pay well. It was also the worst job that exists on planet Earth. Here’s how it worked: depending on the contract, oil workers will often stay in camps, ranging in size from 3,000 people to eight. In the smaller camps, each drain, including the toilets, shower, and sink, runs into one flexible tube. In the winters, the tube needs a heat trace on it so it doesn’t freeze. That tube runs into a metal box, also wrapped in insulation and heated. When that fills up, it trips a pump that sends the horrifying contents of that box to another, larger box, where it all runs through something that is actually called a “corn catcher”, then it’s treated and pumped out, sort of like a septic system. Since temperatures routinely dip well below -30 Celsius and those heating systems routinely fail, there’s a lot of maintenance. Tubes full of shit, piss, and old shower water develop ice plugs. The boxes full of shit, piss, and old shower water freeze solid. When that happens, the whole system backs up, and the showers, toilets, and drains back up. 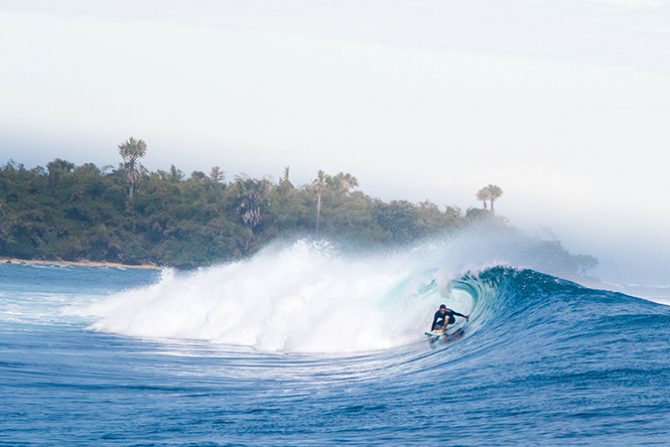 Want to find yourself in places like East Java? You might have to eat shit. Photo: Jeremy Bishop

We’d get a call, head out at 3:00 a.m. to drive winding icy roads through the dark and blowing snow, show up at the site and figure out the issue. “Resolving the issue,” meant a few things: either smash the frozen shit box with a sledgehammer, sending icy shit shrapnel into your hair, mouth, eyes, and all over your coveralls (which, as ice tends to do, eventually melts), cutting out the frozen chunk in the line (which would send the remaining purified human shit pouring all over your hands and arms), or fixing an air-locked pump.

“How’s my shit smell?!” the rig workers would yell from the platform. “See what I had for breakfast?”

Do you remember, way back at the beginning of this, when I asked you if you’d ever had the liquified shit of a large, fat man who’s been eating camp food for a month sprayed at high-velocity directly into your face? Well, here’s how it happened (more than once).

If there’s an air-locked pump, the easiest way to temporarily fix it is to simply drill a hole in the pipe leading to the pump. The first way to check the pump it to manually trip it — simply move the float up and listen. Now, if you’re a selfish asshole, you will drill that hole directly on the top of the pipe, so that it’s positioned perfectly to spray said liquified shit straight up into the waiting mouth of the next person who has to deal with that air-locked pump. I was that next person.

The pump didn’t work, so, as one does, I manually tripped it. And, since the previous person was too lazy to actually fix the problem properly, I copped a face full of liquid shit, mixed with soapy butt water, old dishwater, and piss. As you would imagine, it didn’t taste good. When I told my girlfriend’s dad about this, he looked at me like I was being dramatic.

“Ah well,” he told me from underneath his mustache. “It’s only shit.”

But after that miserable winter, I was flush. I spent months doing nothing except surfing, diving, drinking, and doing exactly what I wanted whenever I wanted to.

So was it worth it? Probably. But it tasted like shit.