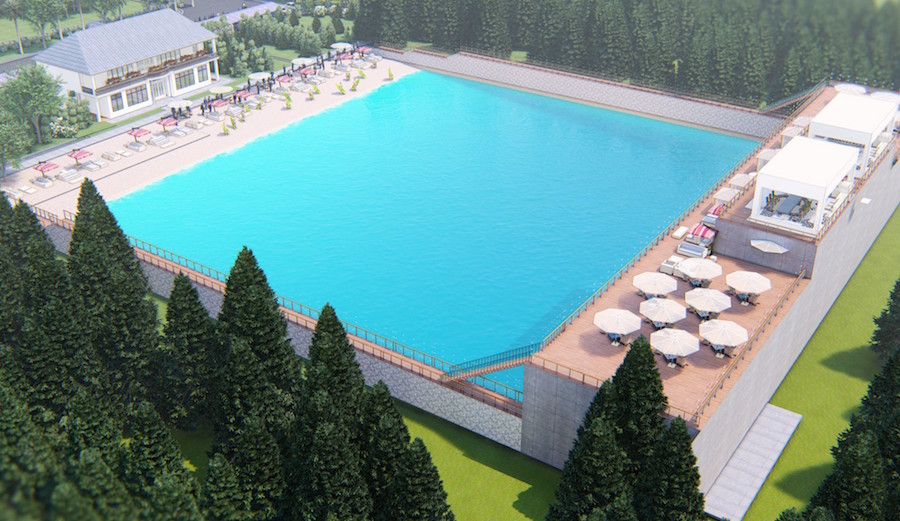 A rendering of the Long Island dream.

“Always seven-foot and hollow.” That’s the slogan spread across the front page of the website for the Long Island Surf Park. It’s more than a slogan though. For the surfers of New York with a shortboard leaning against the apartment wall, it’s a promise, for barrels you can drop into any day you want. Granted this fall has been pretty phenomenal for waves off Long Island, but consistent is not a word used to describe the short-lived swell events and beach breaks here. That is what has driven the development of a soon-to-be surf park 60 miles east of Manhattan and within a day trip of the 20 million residents of the metropolitan area. Amid a wave park arms race on the Eastern Seaboard with a wave about to open in a New Jersey mall (read here), The Long Island Surf Park is not being built at the hands of an enormous resort corporation, or under the name of an icon in the surfing spectrum, but by the aspirations of a father-son duo from the Island.

“We’ve talked about building a wave since I was 10 or 12 years old,” Brett Portera tells me. “The idea really started to take shape though going into my senior year of high school. We were in Orlando, and my dad wanted to rent the Typhoon Lagoon. The first time was at night. It was five or six of us with 100 waves to ourselves. We rented the pool again a few days later. Just my dad, my younger brother, and I. We were exhausted and just in awe of how much fun it was. A few weeks later we were putting together a brief prospectus and asking around to friends and family to gauge if there was really a customer interest.”

Portera, 23, has surfed most of his life and has dedicated the past six years to the development of the park. He’s currently working on his MBA at Rollins College in Winter Park, Florida to prepare for the reality of the business. His partner in the Long Island Surf Park is, of course, his father, Chris Portera. Chris, 59, is a Long Island native, lifelong surfer, and owner of his own, 30-year-old business, Ocean Janitorial Supply. Brett says by his father running his own show it has provided the family a comfortable life and the flexibility to take vacations built around surfing. It’s the kind of life Brett now wants to lead. Their next surf-venture though may be the most challenging, opening the 52,000 square-foot wave pool.

“We’re not going all-in with a $200 million project out of nowhere. To be honest with you, our project, as simple as it is, still has a ton of moving pieces,” says Brett Portera who projects construction of the park to cost less than $30 million.

The timeline for Long Island Surf Park is still unknown. A 3.5-acre location in Shirley, New York was approved this past summer, and building permits with the township and county are in the works now. Three miles from two separate train stations, and just off I-495, the site is accessible by public transportation. At just eight miles from the eastern segment of Fire Island, it will certainly be close to surfing au naturel. Those who feel guilty about their chlorinated shred sessions can cleanse in the closeout laden beach breaks on the nearby Atlantic.

Portera was not willing to comment as to who will be engineering the wave, but he was willing to share some of the future features of the pool. Open year-round, heated water, UV and chlorine treatment, onsite power generation, beginner lessons, public hours, and 700 available memberships for exclusive time blocks.

He, of course, was also willing to share what prospective members were looking for and what he hopes the pool is capable of. “What surprised me the most is the majority of people want a four to six-foot wave, and they don’t even want it to barrel, they want it to be a wall,” Portera says of their market research and the waves local surfers dream of. “We want to be able to do what everyone wants, but we want to be able to do more for the people who want a bigger wave. We are going to be able to produce a seven-foot barreling wave for about a 100-yard ride. It’s going to be lefts and rights, fully customizable.” Seven-foot and hollow, whenever the good people of New York want it, that’s what the Portera’s plan to deliver.