This Is Goecho, a Device That’ll Tell You When Sharks Are Near – But Do You Really Want to Know? 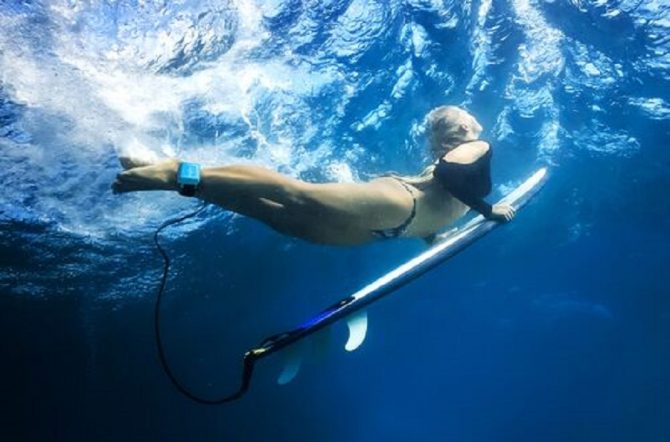 Shark, sharks, sharks. Between the recent run of fatal shark attacks in Australia this year, and the plethora of drone footage showing sharks calmly co-habitating with surfers and swimmers, it seems that we just can’t stop talking about these guys. Which is a good thing, in my opinion. Knowing what to look out for, how to react and how we can watch out for each other is important, as well as thinking up solutions on how we can avoid such potentially deadly encounters in the future.

As far as solutions go, German startup Goecho (pronounced “go-echo”) just appeared in my sponsored Instagram posts, just like Ombraz armless sunglasses, Surfstraw and countless other surf and outdoors gadgets. This time it was probably because I was talking about sharks and Siri heard me and tattled to Uncle Zuckerberg. According to the Goecho website, the device uses ultrasonic scanning to “analyze every object in your environment.” Apparently, something about a shark’s anatomy gives off a unique ultrasonic echo that distinguishes it from other critters out there. Simply don the home-arrest-like ankle bracelet and you’ll be notified if something that looks (sounds?) like a shark is circling you.

Will this be the next big thing in surfing or will it be like the electric fin or the webbed gloves that, um, never really took off? Goecho Engineering just announced its Kickstarter will launch November 1. How that performs could be an indicator, I suppose. I could definitely see people being interested in using it. It’s hard not to think about sharks when you’re out trying to enjoy yourself, and if it really does what it’s supposed to, it could give you some peace of mind. As the website states: “We watch out, you enjoy!”

That being said, as a surfer who regularly plies the waters of Ocean Beach, San Francisco, I know they’re out there. There’s no inlet or cove, it’s just the open ocean. Dolphins and seals surface in the lineup often. I was once chased out of the water by an aggressive sea lion, and while there’s a chance putting one on would make me feel more safe, on the other hand, it might reveal to me how close, and how often, sharks really are nearby. Drone footage from up and down the California coast has illuminated how sharks cruise through lineups, checking out kayakers and swimmers in the water, and then simply swim away.

All the science points to humans not being high on a sharks “to eat” list. As long as it stays that way, I’d rather just reflect on the statistics, realize an attack is statistically, really unlikely (even though surfing does raise your chances) and make like a bait fish — stick together and hope for the best. If my ankle bracelet started vibrating every time I paddled out, would I keep surfing? I don’t know if I’d be able to mentally handle the fact that my shark vibrator was going off. There’d be no going back. I’d rather just keep surfing in blissful naiveté , thanks.