If you haven’t heard about 19-year-old Pacha Light, keep reading. The Ecuadorian-born, Australian-raised professional surfer is a quickly-rising star, finishing fourth in the 2019 WSL Australian Junior Tour rankings. Her sights are keenly set on eventually qualifying for the women’s World Championship Tour.

However, unlike most of her competitors who had such dreams of qualifying since they were that five-year-old in the lineup shredding harder than many adults, Pacha didn’t start surfing until she was nine. Her first surfboard was a gifted competition board from Laura Enever. The story goes that Pacha had surfed a few times and found herself completely hooked, but in need of a board, she set up outside the Roxy Pro happening near her house on the Gold Coast with a sign that read, “Busking for a Board,” and started dancing. Laura showed up, danced to a few tunes, and gifted Pacha one of her own boards with the inscription: “To dear Pacha, You’re the most amazing dancer EVER. Now have some fun in the surf! Laura Enever xxx.”

Now, whenever Pacha travels, she always carries an extra board or two to give away. Service to the community and the importance of the environment have always been important to her, values inspired by her parents, both environmental activists. Pacha is certainly following in their footsteps: she’s working on an environmental project of her own with the Ecuadorian Government to protect endangered sharks of the Galapagos. “Like every part of nature, sharks are vital in keeping the whole ecosystem thriving,” Pacha says. 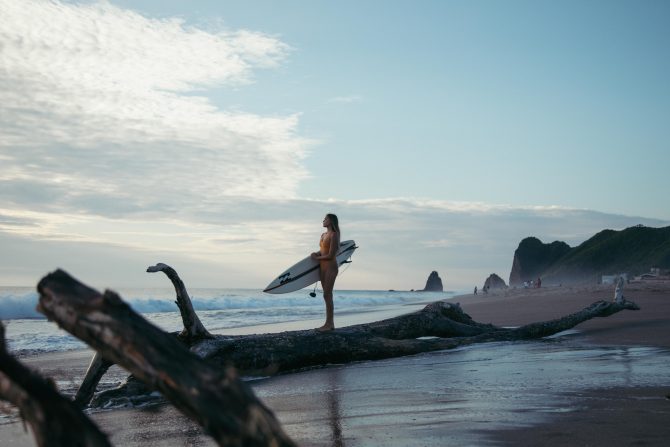 Recently, Pacha took a trip to her birthplace for Billabong’s Home series – stories from around the world about the countries, cultures, and families that paint young surfers’ backgrounds. Despite Pacha’s status as an Australian surfer, she carries many aspects of her Ecuadorian identity with her – one being her name. “Pacha” comes from “Pachamama,” the Quechua (native Ecuadorian) word for Mother Earth. To her, home is “more than a house, it’s feelings, it’s memories, it’s people, it’s the laughter of family and an overall love for our planet and nature.”

Editor’s Note: This feature was done in partnership with Billabong.