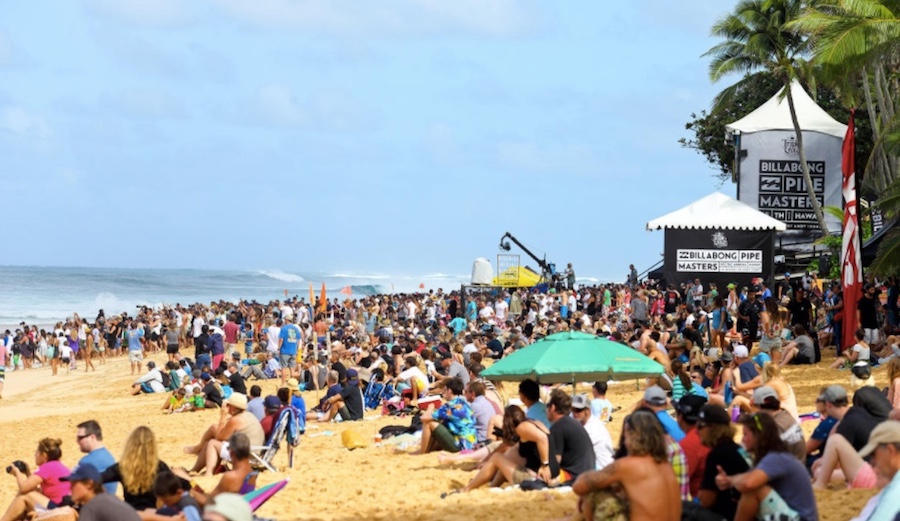 Oh, man. What a wild and crazy thing professional surfing has become in just the last year. A wave pool’s on tour in 2018. Lowers and Fiji are not. And the World Surf League and the City of Honolulu have reached an impasse over a permitting issue for 2019. The result? WSL CEO Sophie Goldschmidt said in a statement, “We are disappointed we will not be able to run the 2019 Billabong Pipe Masters.” The nail in the coffin from the horse’s mouth, so to speak.

Surf fans the world over today are likely trying to make sense of all that went down, and in all likelihood looking to lay blame. Indeed, when we broke the news on Thursday night, comments on Facebook essentially echoed two opposing sentiments. 1) “It’s the WSL’s (and more specifically its CEO’s) fault,” or 2) “It’s Honolulu’s Democratic mayor, Kirk Caldwell’s, fault.” The latter typically including some reference to liberals’ affinity for regulation and bureaucratic red tape. You know, that old chestnut.

But let’s break it down.

The City of Honolulu’s argument is essentially this: the World Surf League applied to host a number of surf contests during the 2018/2019 winter including the Pipe Masters in December 2018 and the Volcom Pipe Pro in January 2019. According to Andrew Perreira, Public Information Officer for Mayor Caldwell’s office, the League made city officials aware of its intent to change the January Volcom Pipe Pro to a January Pipe Masters on December 13th – 35 days after the November 9th deadline to make modifications to its permitting application.

The WSL’s argument that the change to the Volcom Pipe Pro would be in name alone is the primary point of contention between the League and the City of Honolulu. “The events are completely different in terms of their impact,” Perreira told The Inertia. “The Pipe Masters attracts 8,000 people and the Pipe Pro attracts 1,500 people.”

In January, when the City initially denied the League’s request by virtue of the fact it was submitted late, WSL CEO Sophie Goldschmidt reportedly traveled to Honolulu to persuade the mayor’s office. It didn’t work. And city officials dug in their heels on permitting rules.

The League announced there wouldn’t be a 2019 Pipe Masters, and here we are.

“The WSL has been awarded six events for the 2018/2019 winter surf season on the North Shore, more than any other applicant,” said Mayor Caldwell in a statement to The Inertia. “I am happy that they decided not to pull out of Hawai‘i for the upcoming season. I am disappointed that they don’t plan to apply for the 2019 Pipe Masters in Hawai‘i, and I hope they will keep an open mind and reconsider for the sake of giving Hawai‘i’s young local surfers the opportunity to compete on the world stage. We look forward to working with WSL for other events in future years.”

If the language that the WSL “doesn’t plan to apply for the 2019 Pipe Masters in Hawaii,” sounds inconsistent with the WSL’s, that’s because it is. According to Mayor Caldwell’s office, the application period is still open should the League decide it’d like to host a Pipe Masters in December of 2019. In other words, it sounds a lot like the WSL is holding the Billabong Pipe Masters (professional surfing’s North Star, according to Matt Warshaw) hostage in an effort to strongarm the city of Honolulu. “If we can’t run it in January (despite having missed the official deadline) we won’t run it at all!” says the WSL.

The ordeal is akin to Congressional democrats and republicans not being able to compromise on a budget leading to a government shutdown. Because who loses in that scenario? Not either side, but the rest of us. And with Pipeline dropped from the Championship Tour it’s exactly the same. Nobody wins.