This Study Analyzed Over 4,000 World Tour Waves to See if Surfers Really Do Perform Better on Their Frontside 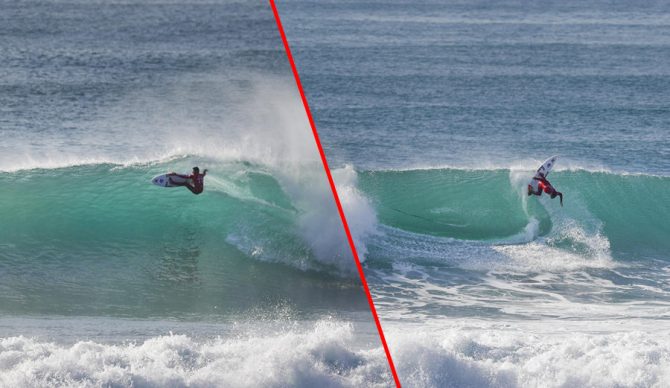 As surfers, we’ve often asked questions like What’s the deal with Goofies and Regulars anyway? Recently, surf researchers from Germany published a study in the prestigious journal Laterality: Asymmetries of Body, Brain, and Cognition to gain further insight into this question.

Dr. Philip Furley, Jannik Dörr — both surfers and affiliated with the German Sports University — and Florian Loffing from the Universtiy of Oldenburg, ran a two-fold study on “laterality in surfing.” The aim of the present study was to test if lateral preferences of surfers are associated with behavior and performance depending on the direction of a breaking wave. In one study, they collected self-report data through an online survey of recreational surfers (n = 394). In their second study, all waves (2,552 waves) of the WSL season of 2014 were analyzed in regards to wave direction and the surfer’s stance.

The survey results of study 1 support the hypothesis and widespread belief that recreational surfers favor surfing frontside as opposed to backside. Recreational surfers reported that they were able to perform better when surfing frontside as opposed to backside. They described that facing the wave was beneficial for their surfing (they also reported more wipeouts while surfing backside). On average, surfers say they have better skills and more control of executing maneuvers when their upper body was oriented towards the breaking wave.

The researchers discuss the diverging findings between Study 1 and Study 2 from the “circumvention-of-limits” argumentation within the expertise literature. Professional surfers most likely have acquired skills through extensive practice allowing them to compensate for debilitative individual and environmental circumstances. Meaning that the pros compared to the average Joes feel less of a difference between back- of frontside surfing (according to their scores).

There may be another potential indication that surf stance and wave direction are related, even in professional surfing. Namely, regular and goofy surfers might differ in the choice between right- and left-breaking waves when they have the opportunity to do so. That is, provided that professional surfers have the preference toward the (theoretically) better fit between surf stance and wave direction, then regular (goofy) surfers should more often choose to go right (left). The researchers tested this hypothesis by analyzing if surf stance created a systematic bias in directional choices on the five World Tour contests that have both lefts and rights on offer. To this end, it was necessary to analyze every wave surfed in every heat (n = 4,218 waves) instead of just analyzing the two top scoring waves. Specifically, goofy-footed surfers surfed left waves in 47.6% of the cases and right waves in 52.4%, whereas regular-footed surfers surfed left waves in only 34.7% of the cases and right waves in 65.3%. Based on the odds ratio of 1.71, goofy-footed surfers were about 1.7 times more likely than regular-footed surfers going left as opposed to right in contests that had left and right waves on offer.

This research might have practical implications, too. Whereas on the CT waves differ between heaving, draining lefts like Teahupo’o and cruisy rights like Bells, newly emerging wave pools have the potential to deliver consistent (shape, speed) right and left-breaking waves. These pools might prove useful in assisting developing surfers in becoming equally proficient at surfing frontside and backside through systematic training activities. In addition, it seems advisable that recreational surfers can only benefit in developing their surfing skills by leaving their comfort zone of frontside surfing (as shown in study 1) and challenging themselves by going to locations that have more backside waves on offer.