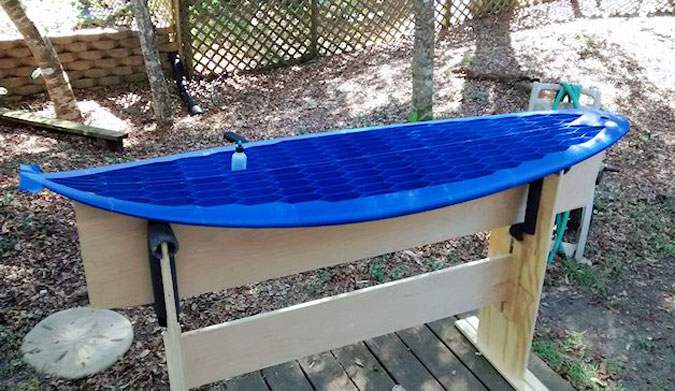 This board was created on a 3D printer.

Jody Roth is something of a creator. As the owner of a 3D printer–which could, quite possibly, turn out to be the most important development since the industrial revolution–he’s been making everything from doll beds for his daughter to a surfboard for his son. Although I’m a huge fan of doll beds, the latter is what caught my eye.

A few weeks ago, I ran into a story about a man who was using a 3D printer to make downhill mountain bikes. My first thought on seeing that story (after wondering if making a 3D printer on a 3D printer would create some kind of wormhole to another dimension) was whether someone was going to make a surfboard. Well, Roth turned out to be the man to do it.

One morning, Jody sat down to breakfast with his son, Matej. They had miniature surfboards hanging on the wall, and it lit a lightbulb in his head. “I bet we could make a surfboard on the 3D printer,” he told his son. Of course, Matej was excited. “That would be so cool!” 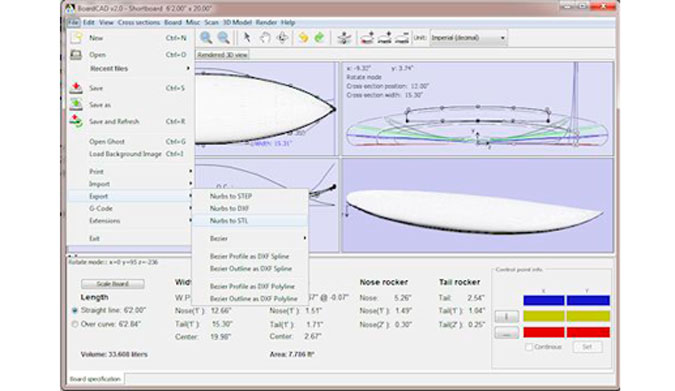 Using the default template in BoardCAD, they scaled it into a 6’2.

The whole journey can be found on Roth’s blog, Hobbies of a Bogue Rat. With a measure twice, cut once attitude, the elder Roth and his son decided to build a miniature board first at 1/3 scale, just to test the waters–and it’s a good thing they did, because they ran into a few problems. After designing the board using BoardCAD, they got started. According to his blog, everything went smoothly until the last twenty layers, when the print head shifted by a mere 1 mm. While it wasn’t the worst thing that could’ve happened, on a larger board, it would be much worse. The whole process was a lengthy one, but in short, the mini-board was built in three separate parts, then glued together. In order to keep the board light, they designed a diamond shaped pattern for the middle portion of the board. “It was difficult to get all the little diamond parts to align,” he wrote on his blog, “but it came out pretty good. The individual parts were quite flimsy but everything firmed up when assembled.  Not so well on the larger model.”

After they had most of the kinks worked out, they moved on to a full-size shortboard. “Using the default shortboard template in BoardCAD,” said Roth, “I scaled it out to 6’2″ x 20″ x 2.675″ then exported it as an STL file.”  From there, they broke the design into separate parts, planning on gluing them together once the 3D printer spat out the pieces. There were nine sections lengthwise, with seven split along the stringer. Each part took nearly 10 hours to print, so he was able to assemble the parts as they were created. For a more in depth explanation about the diamond shaped pattern, rail taper, and stinger design, check out Hobbies of a Bogue Rat. 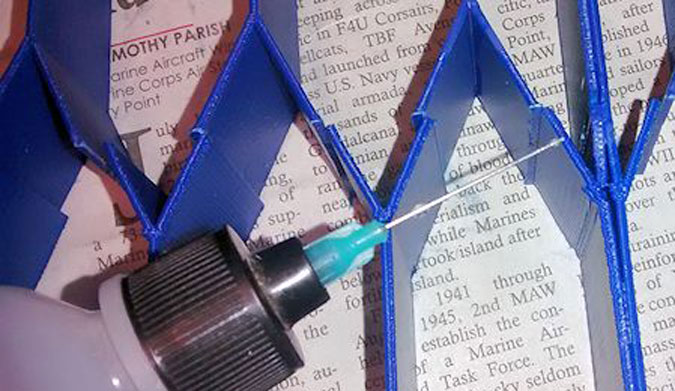 Getting all the little parts to match up was no easy task.

Once all the pieces were successfully glued together (an arduous task because of the diamond pattern), Roth began glassing. “If you have never glassed a board before,” he wrote, “do not believe the videos that make it look so easy to do. Pour a little here…brush a little…squeegee a little…tuck a little…sand a bit to make it look nice then shine it up. Easy. Yeah right.”

Thinking that the traditional method of glassing would work, he laid out a layer of 4oz over 6oz, trimmed to just over an inch over the rail. But because of the diamond pattern, the resin drained right through the board, soaking the other side.

“The result was that there were a ton of pinholes where the sanding coat seeped through creating a pearl of resin on the other side,” he explained. “The problem with this kind of board is that there is no foam underneath to prevent the excess resin from flowing right through the glass and down to the top of the board.” 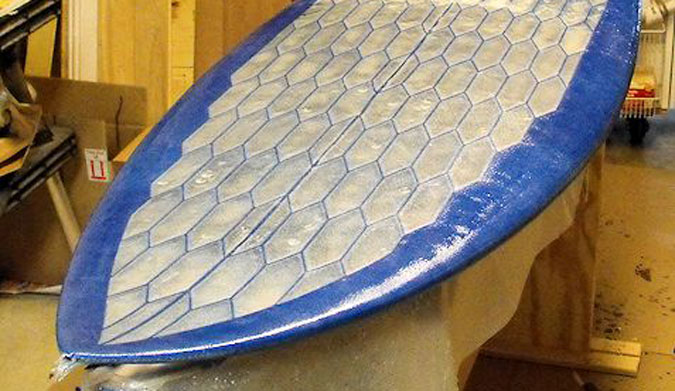 Because of the diamond pattern, the resin drained right through the board, soaking the other side.

So what about the fins? Those were a little simpler. The printer spat them out in no time, and as there was no complicated assembly required, things sped up a little. Then Matej got his hands dirty… not for long. “Matej got in there and prepped the first coat,” Jody wrote, “then lost patience with the 10 minute cure in the sun and went back to the Xbox.  You can make more on Minecraft in 10 minutes than in the real world.” After laminating the fins with Sun Cure poly resin, he glued them in… and voila. He had a surfboard. 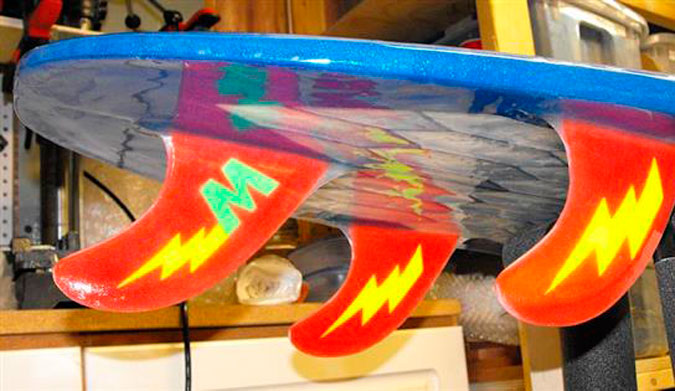 Designing the fins was much simpler task.

But as with most trial and error, there is a lot of error. “Not sure if I would ever do this again because the time required is huge, cost is about the same as a traditional board in the store, and I don’t have the skill to do it perfect next time,” he remembered. And although it may not have been a perfect first trial, Jody Roth’s attitude towards created something from nothing speaks to the kind of passion and creativity that is just one of many paths that may lead to the future of surfboards.