Tierra De Patagones: The Most Beautiful, Life Affirming Trip You Will Ever Vicariously Take 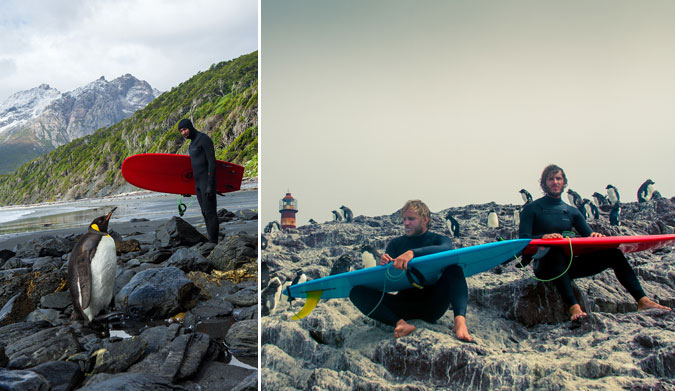 “Front and center in this little meditation is Patagonia, which quietly explodes off the screen in long vistas and charming characters.”

Did you know that there are formulas for nearly everything you watch? From the three minute video clip in which you “won’t believe what one person did and how another person reacted” to the movie you are going to see Friday night, almost all content is little more than basic tropes slotted into well worn formulas designed for pure ease of consumption. This is, of course, why so much of what we watch is insanely fucking dull. Even when it’s completely new, the very act of shoehorning the human experience into a neat little formats of 3 minutes, 30 minutes, or 90 minutes makes it feel plastic and repetetive.

Surf movies are no different. They are, like most things, fun one at a time, but soporifically anodyne after three or more. They bleed into one another with their silly platitudes, cookie cutter (albeit amazing) surfing, and whatever-music-is hip-right-now soundtracks. There is nothing particularly objectional about them, but there is rarely anything memorable either.

So I cringed when my friend Julian Azulay asked me to review his latest film. I met Julian at one of the San Sebastian Surf Film Festivals. I was judging and he was permiering his first work, the happy-go-lucky travel doc Gauchos del Mar, which ended up with the teen choice award at the festival. At the awards party, he cornered me drunkenly, (that is, I was drunk, he seemed quite sober) and asked what I had and hadn’t liked about the film. I was a little reluctant to answer, as I’ve found that few people ever want to hear what you really think about their work. But he pushed me on it politely and I eventually gave it to him, raw and uncut. To which he responded by thanking me and apparently taking much of it into consideration. A unique dude, to say the least.

He and his younger brother, Joaquin, an architect and businessman, respectively, have returned with their second work, Tierra De Patagones, and once again Julian was asking me to pass judgement in a way I was not entirely comfortable with. So one night I settled into bed beside my wife–who occasionally enjoys watching films “like that one with the guys who fly around the world in the 60s wearing suits and surfing in all those different places”–and entered my Vimeo embed codes. What we got was a surf film that fit no modern formula for filmmaking at all.

Long story short: the movie documents a trip the brothers take, by truck, from their native Buenos Aires right down to the very tippy-tip of Tierra del Fuego. It starts off pretty standardly, in medias res, with them on a boat searching for some mysto wave that may or may not exist, then flashes back to the trip that brought them to that point. After that, nothing much happens. They drive a lot, they meet some interesting people and have interesting chats with them, they surf pretty mundane waves in pretty little bays, they drink a fair bit of yerba mate, they hit the booze, they fish, they even do a bit of gardening. It’s basically similar to many of the surf trips you have probably taken (minus the mate and gardening) and damnit if it isn’t one of the most beautiful, and life affirming trips you will ever vicariously take.

There is no manufactured drama, no forced ecological message, no secret, paradigm changing wave that is going to blow up magazines in eight months’ time. Just a very long stretch of road and two laconic brothers with a yearning for it that neither of them fully grasp. It gets you wondering, as you cruise down that long highway at the end of the world with them, exactly what attracts you to this sort of journey. What is it about the road, the waves, and the people that just rings true in your chest? The brothers Azulay don’t offer any easy answers, but they do put wanderlust into a keen and unique perspective that tickles some essential truths about beauty, travel, and the desire to seek out the unknown.

Front and center in this little meditation is Patagonia, which quietly explodes off the screen in long vistas and charming characters. What the brothers lack in surf cinematography (which is good, but slightly below pro level) they make up for with lingering shots of one of the most stark but beckoning landscapes in the world. The surfing, in fact, becomes secondary, a nice diversion from the serious business of reveling in such natural hallowed ground.

Tierras De Patagones inhabits a strange and delightful world halfway between professional travel doc and home movie, both better than your go-pro montages but more visceral than the shiny professional stuff that has been stripped of personality and character by the incessant need for investors and large audiences. Its raw perspective, leisurely pace, and genuine human warmth are the perfect antidote to a world trapped in the dull purgatory of modern formulas. These qualities are, in one sense, the marks of filmmakers still learning their craft. But as a viewer you find yourself hoping that the Azulays never quite graduate from filmmaking 101 because it would rob their singular travelogues of the very unique charm that they embody.

To purchase the film, go to Gauchosdelmar.com.