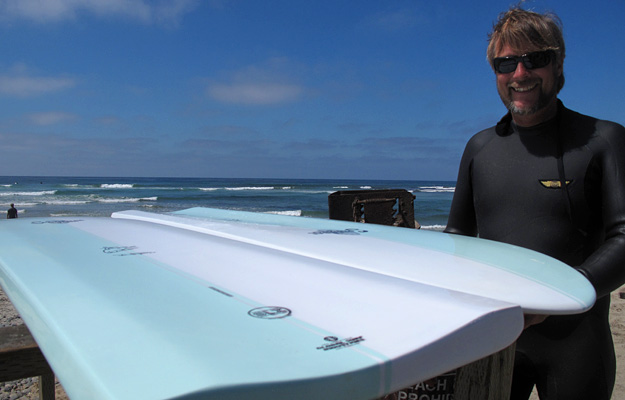 I tried a wooden alaia once before, and I was terrible at it. Essentially, I couldn’t do whatever it was that I was supposed to do on it. I didn’t come remotely close. Granted, the shore pound on a flat day by Off The Wall didn’t provide the friendliest conditions for an alaia introduction, but when I held the porous, leashless wood chip beneath my arm and jumped into the Pacific, I felt a certain sense of…confusion? Self-importance? Excitement?

For a fleeting moment, I think I established a (very) shallow connection with surfing’s ancestry. After all, I was on a piece of timber (in Hawaii, no less) instead of a mishmash of chemicals and fiberglass from the bowels of industrial Orange County. This board had no fins. It barely floated. For these reasons (and the fact that I couldn’t actually do it…) I was a skeptic. I mean, the board’s just not that practical, right?

Tom Wegener, one of the men responsible for the modern “alaia revival,” is well aware of this skepticism. Even after he was named Shaper of the Year by Surfing Magazine for his work with the wooden alaia, he couldn’t deny the fact that paddling a sinking tree into the lineup just isn’t the most accessible approach to surfing. While I don’t think accessibility was his primary intention, it’s certainly become a concern because one year later, after teaming up with Global Surf Industries he’s developed an EPS alaia called “The Tuna,” which puts a modern twist on an ancient craft…and effectively reinvents his reinvention for the masses.

So when he offered me the opportunity to test-drive “The Tuna” while visiting Southern California on a rare sunny day at Cardiff Reef a few summers ago, I was there in a skip. Granted, my expectations were low – especially after my failure back in Hawaii, and I told Tom as much. He told me that David Rastovich couldn’t even surf the alaia the first time he tried. I didn’t really believe him, but I appreciated the gesture. Some people can surf these slabs pretty well. I’m not one of those people.

For those of us who will never achieve Rasta status, I conspired with Wegener to create a short list of mental notes from the EPS alaia experience. Here are a few observations from my “Tuna Test-Drive:”

1) “The first thing I say with new alaia riders is don’t even try to stand up,” Wegener told me. “Just get out there and feel the wave and the whitewash and feel the flex of the board. Get to know the board first. To the ancient Hawaiians, there wasn’t a big distinction between standing on a board and belly riding. Great surfers don’t mind belly boarding.”

2) Surfing an alaia is obviously different; however, it’s one thing to think it, and another to embrace it. The latter is essential. Because I was so accustomed to how surfing feels via fins and fiberglass, everything about the alaia just felt wrong…until I began to understand that it wasn’t wrong; it was just different. After conquering that mental barrier I actually started catching and surfing waves. It was a brand new challenge. More importantly, it was really fun.

3) It’s much easier to paddle than its wooden cousin. I felt like I was on a fish when paddling for sets, which I’m pretty sure was the point.

4) The board always wants to spin around, and that’s not something I’m accustomed to, so after making some mental adjustments and placing more weight on my back foot it was nice to almost complete 360s on the face of a wave. Advantage Tuna.

5) Attaching a leash to an EPS alaia was an act oozing with irony. It stripped most of that self-importance from the exercise, which is probably a good thing, and (in my mind) made it absolutely inexcusable to suck at this activity. I had to reconcile these seemingly antithetical concepts. Tom?

“About being a ‘sell out,’ I knew that was coming,” Wegener conceded. “First and foremost, I strive to make the best surfboard I can. Working with GSI gets me there with this project. GSI is delivering what the vast majority of surfers want, a really quality surfboard at a low price. Also, working with GSI I can progress surfboard shapes in a way that I only dreamed a few years ago.”

And you can’t really fault him for that. Sure, purists might cry blasphemy at the thought of merging ancient and modern surf technologies while implementing cost-cutting measures in the process, but I have a hard time sympathizing with the active discouragement of new ideas. After spending a few hours surfing with Tom, it was abundantly apparent that he believes in what he’s doing. Or he’s an awesome salesman.

“It was killing me to think that the ancient Hawaiian style of surfing may disappear again,” Wegener told me. It’s actually been a highlight of my professional life to recreate and discover the whole separate universe of principles that these surfboards work off.”

Energized after an hour-long surf on his new invention, I was happy as a clam to have tried something new. And that was worth something. I still wasn’t very good at it, but it changed my perspective in some small way about how to approach riding a wave. After a while that approach became more intuitive, which was addictive. Even if the alaia is a bit of a novelty, it forced me to think very hard about foundational elements of surfing, and that kind of time travel is priceless. I got to learn to surf again.

“Surfing tends to get jaded, because people do the same thing for too long,” Wegener told me. “If you keep breaking it up, you stay stoked to surf.”

So if you’re bored with your conventional quiver or looking for a new challenge, “The Tuna” might provide the catalyst necessary to reinvigorate your surf life. Priced at $495, it’s not exactly cheap, but like Wegener said, when every session is Ground Hog Day, it’s nice to throw a wild card in the mix. If nothing else, it’s a fun way to enjoy an otherwise unremarkable day of waves, and isn’t that the point?