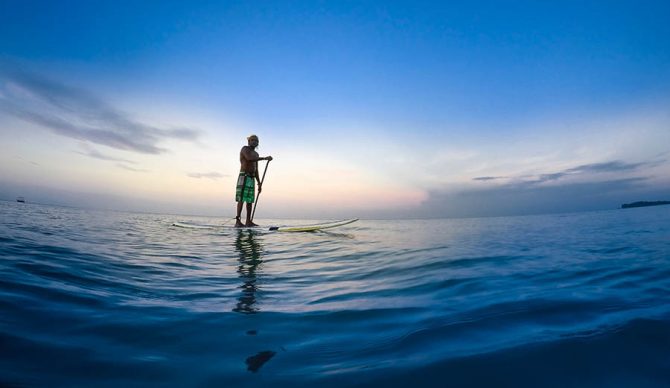 Far from a passing fad, stand-up paddling is one of the fastest growing sports in the world. SUP has quickly emerged as mainstream, with inflatable paddleboards fully stocked at Costco and ALDI, and even being included in the conversation as a possible full-fledged Olympic sport. However, as surfing and paddling have gained popularity, their origins are in danger of being overlooked and forgotten.

It’s popular knowledge that wave riding was first documented by westerners in 1778 when Captain Cook sailed to Hawaii. He wrote that Hawaiians seemed almost amphibious thanks to their comfort in the ocean. While among scholars of Thor Heyerdahl there may be some debate on surfing’s roots, there is no doubt Polynesians had the greatest impact on the art form that surfing is today.

Surfing first made its global debut thanks to the efforts of one man: The Duke. Duke Kahanamoku was a native Hawaiian, surfer, and five-time Olympic gold medalist. Between competing in the Olympics, The Duke traveled the globe showcasing his surfing ability. Slowly but surely, he sparked the growth in popularity of surfing as we know it today.

But all surfers are familiar with this story. We know the face and name of Duke from Sydney to Sheboygan while the same can’t be said for stand-up paddleboarding.

If you’re like me, you may have seen SUP seemingly emerge in the early 2000’s with influence from Laird Hamilton. Slowly, the old and lazy began to populate lineups like school janitors, sweeping the surface of the water and laying claim to every wave. Roughly 20 years later, stand-up paddleboards can be found in lakes, rivers, bays, and oceans all around the world. From an essentially absent sport, SUP is currently projected to grow to a $10 billion industry by 2020.

It may be a surprise, but the act of standing while navigating narrow watercrafts has been utilized for centuries by cultures all across the globe. Venetian gondoliers have been romantically paddling down canals for centuries and pre-Inca civilizations paddled into waves as early as 1000 BC. Jamaican banana farmers paddled long bamboo rafts downriver using a long pole to deliver crops to the market, and Israeli lifeguards utilized stand-up paddle vessels for facilitating rescues. Even California loggers at the turn of the century would occasionally ride a tree downstream with the support of a long stick. But where did wave riding atop a SUP emerge?

We look back in history to the early 1900’s on Hawaii’s Big Island. John “Pops” AhChoy was born in 1920, the third eldest of 13 children. At 12, he left school to help his family in the local Sugar plantation. He married and had three children, Bobby, Leroy, and Suzanne, before moving to O’ahu in 1944.

As he got older and his knees began to bother him, he took to standing up paddling, using an oar to catch waves. John could be seen standing on his board, smoking a cigarette, and dawning a banana-yellow hard hat with knee pads in the lineup. With that, a new style of surfing was born.

Enter the beachboys. Not the Brian Wilson variety. Beachboys, unlike their popular music counterparts, lived and worked on the beach teaching surfing and guiding canoe tours. Duke Kahanamoku was among their ranks as well as one of the first stand up paddlers: Bobby Ah Choy.

Beachboys’ main source of income was primarily surf instruction and both Duke and Bobby would use canoe paddles to paddle out into the surf to get a better vantage point for beginner surfers and incoming swells. Bobby and his brother Leroy began to use this technique more regularly as a means of taking photos in the water. Bobby was often seen paddleboarding, aka “beach boy surfing,” with a pack of cigarettes strapped to his arm and camera hung around his neck, all while sporting a baseball cap and occasionally a chair.

After a car accident left him unable to prone paddle or kneel, Bobby took to SUP exclusively for catching waves. What started simply as a novelty tool for business became a water sport in its own right. Bobby could be seen paddling at Waikiki from the 1960s until his death in 2007.

His sense of fun and love for stand-up paddling was contagious and was quickly passed on to younger generations across Waikiki. John “Zap” Zapotocky took up the sport in the 60s and championed this style of wave riding well into his 90s. In a 2010 interview with C4 Waterman, Zap recalled seeing The Duke ride into Waikiki using a paddle and immediately thought, “that’s something I should be doing.” Fifty-five years later, he was still catching waves at Waikiki, canoe paddle in hand.

Once a little-known sport practiced exclusively by lifelong watermen, stand-up paddling had its first global platform in 2003 during the “Buffalo Big Board” contest. Forty-nine competitors entered the stand-up division and the ever sleek Laird Hamilton was captured by surf media. The SUP revival was born.

As we now all know, stand-up paddlers quickly realized that waves were optional. As a result, SUP racing, flatwater paddling, and other creative forms quickly exploded into the diverse sport that we now know today.

Both Bobby Ah Choy and John Zapotocky had the opportunity to watch their sport flourish late in their lives. Bobby participated in the first ever SUP competition at Waikiki shortly before his death and, appropriately, made the final. He was overtaken in that final by Brian Keaulana. However, Keaulana recognized Ah Choy’s contribution to the sport and presented him with the trophy following his victory. Bobby passed in 2007 from cancer but his legacy as a legendary surfer and watermen lives on.

Zapatocky died in 2013 and paddled right up to his passing. Today, he is widely recognized by many as the first diehard SUP surfer. John predicted in 2010 that stand-up paddleboards would be found in every lake, river, lagoon, and anywhere else you could find water. He credited the sport for its health and fitness benefits, one of the main drivers of today’s SUP evolution.

While the global rise of surfing can be traced back through history to Duke Kahanamoku, the godfather of surfing, stand-up paddling owes its roots to the collective contribution of great watermen like John Ah Choy, Bobby Ah Choy, and John Zapatocky. If not for their inventiveness, creativity, and dedication, we would not see their legacy standing on the outside of your favorite break. So, the next time you head out for a paddle, be sure to remember those who came before you and don’t forget your hard hat.