The Tweed Coast Pro was fairly eventful, involving a knee taken in solidarity with Black Lives Matter by Tyler Wright, and dominant performances on both the men’s and women’s sides.

In the men’s draw, upstart competitors such as 21-year-old Ethan Ewing and South African Matthew McGillivray pushed through a stacked bracket to reach the finals. Ewing defeated top seed Owen Wright and CTer Connor O’Leary on his way  and CT rookie McGillivray took down Jack Robinson, who had himself defeated Julian Wilson.

In the end, Ewing showed he will certainly draw intrigue from surf pundits when the CT is back in earnest, scoring a 9.77 in the final, the event’s highest score on his way to the win.

On the women’s side, there were no such surprises. Top competitors Tyler Wright and Stephanie Gilmore made their way through a strong Australasian-heavy field to face each other in the final, similar to ten months prior when they matched up  in the final of the Lululemon Maui Pro at the end of what is now looked back at as a nostalgically-normal 2019 season. Ultimately, Tyler Wright, who has harnessed that attack mode again that she was so well known for, won the day, backing up her strong statement of solidarity with BLM made earlier in the event. 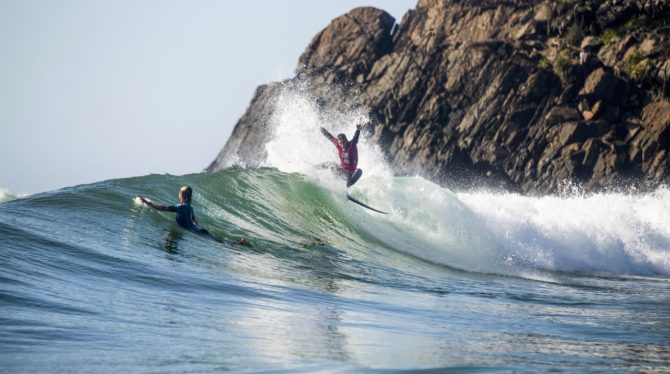 A part of the global WSL Countdown series, the Tweed Coast Pro is one of three events slated for the Australian Grand Slam of Surfing, which will host two more events (thankfully, all in the ocean) – one at Margaret River and another on the Gold Coast. The respective men’s and women’s winners will be awarded $20,000 AUD to donate to a charity of their choice (similar to the recent Rumble at the Ranch). The competitors — 12 men and 12 women, mainly Australian CT-ers with a few non-CT Australians and non-Australian wildcards — will be on call throughout September and October, waiting for swell to hit the above Grand Slam locations. Given just three days notice, the competitors will travel to the location and compete in a two-day event as they just did during the Tweed Coast Pro in New South Wales.