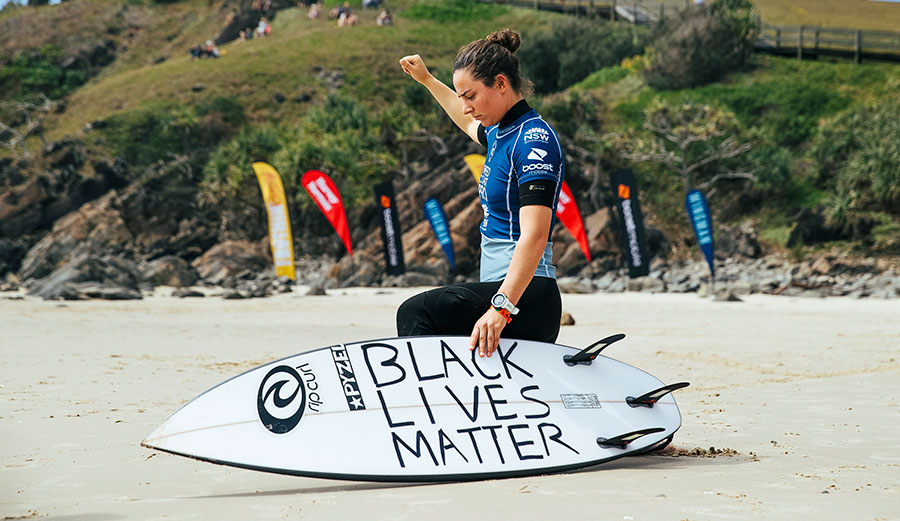 The event, which is part of the Australian Grand Slam of Surfing, saw Wright kneel for precisely 439 seconds, which is one second for each Australian First Nations person who has died in police custody since 1991.

Before I’m an athlete, I’m a human being,” she wrote in a statement posted on Instagram. “So today, before my heat at the Tweed Coast Pro, I’ll be taking a knee in solidarity with Black Lives Matter. These are divisive times and I’m a long way from perfect, but I deeply believe in the pursuit of racial justice and equality for everyone. I understand that my white privilege and having this platform with the surfing community means I have the choice to say something and do something… and that many don’t have that opportunity. I need to say more and do more with mine and I’m committed to challenging and changing the systems that continue to discriminate and oppress people of different backgrounds.” You can read the rest of her statement here.

The World Surf League stood behind Wright: “The WSL is in full support of Wright and everyone around the world who are making their voices heard against racism and injustice,” read a statement. “Surfing is for everyone and the WSL stands in solidarity to proactively work against racism and fight for true equality.”

Sadly, as is to be expected in this day and age, some internet commenters chose to voice their discontent with Wright. “You lost me as a fan!” wrote @jeffneverready on Instagram. “BLM?” wrote an anonymous commenter on the World Surf League’s website. “Really! They are destroying America. I stopped watching sports because of it. Now surfing? BYE!”

Wright follows the example of countless other professional athletes currently expressing support for the movement.