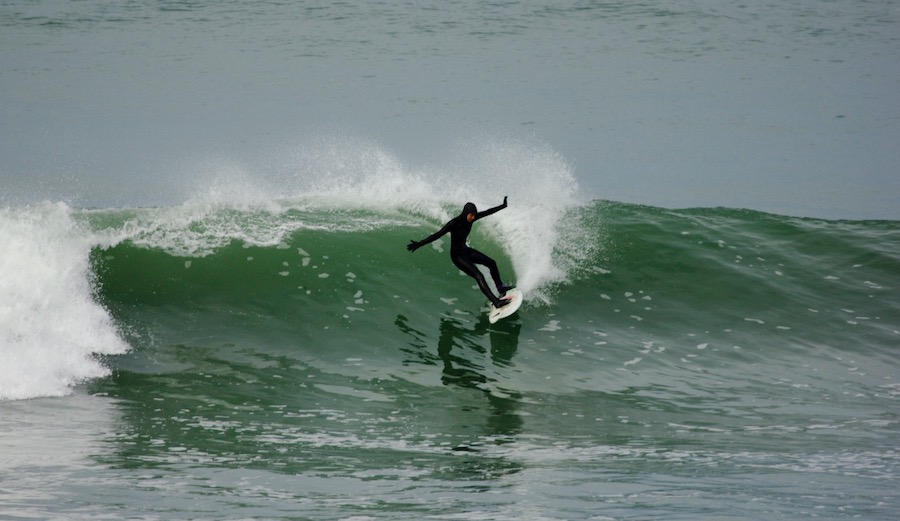 Editor’s note: In the wake of revelations surrounding a WSL meeting during the Quiksilver Pro Gold Coast in which photographers were reportedly instructed not to zoom in on female athletes’ bikinis, a journalist reached out to UK surfer Sophie Hellyer for comment after discovering an article she’d written about the misrepresentation of female surfers. In turn, a litany of mainstream media outlets published articles making similar claims like “Surf star Sophie Hellyer lets rip at bikini sexism,” but Hellyer says the media has mischaracterized her beliefs and taken her statements out of context. In response, Sophie penned an open letter to the press. We asked her if we could republish it, and she kindly said yes.

In a week where Marielle Franco was shot dead, Palestinian children remain imprisoned and their human rights violated, a week where thousands of women worldwide suffered FGM, whilst the Great Pacific Garbage Patch continues to grow exponentially, a car bomb killed 14 in Somalia, and 28,300 people were forced to flee their homes due to conflict and persecution each day, my story seems fairly irrelevant.
⠀⠀⠀⠀⠀⠀⠀⠀⠀
I’m not sure why this week an article I wrote last year has been splashed all over the papers with photos of me that are 6 years old, my words taken out of context and the true meaning completely overlooked, when there are such hugely devastating and pressing issues all around us.

I was contacted for a comment on the WSL’s new policy, the News Group did not accurately or fairly state their intentions, and have spun an inaccurate story. This has happened to me before and I have kept quiet. I am not a young girl anymore, and I will stand up for my voice to be represented clearly and correctly.

Following my previous emails, please can you make the following amendments to your articles in publications such as The Times immediately? If you cannot make the amendments, I request that you unpublish.

I feel you have a lot of misinformation here and that I have been exploited & misrepresented. This is a case of defamation. I was not informed you would be writing an article about me, and I am very upset you have done so in this way. I was asked as a female athlete to comment on the World Surf League’s new policy, and I was under the understanding the article was about that, not the, I quote “Sexual Surfing News… With Pictures!” that you have published about me.

1. “Surf star Sophie Hellyer lets rip at bikini sexism” Not true. I was discussing the over-sexualization of female surfers,  and the imbalance and objectification I have experienced, and the need for more female surfers to be truly represented in the media. I think it’s important we overcome this unconscious bias and move away from this potentially damaging archetype of female surfers, as it is unhealthy for everyone.

2. “Sophie Hellyer, a former English champion, said that surfing was ‘hyper-sexualized’ and complained about a fall in media coverage since she had ­decided to stop wearing a ­bikini” Not true. I have not complained. Nor have I stopped wearing a bikini. I think there is a need for more diverse female role models to make surfing culture more healthy and empowering, leaving the world a safer, more diverse and sustainable place. I am not talking about myself in a wetsuit here, I am talking about a whole world of female surfers that are not being represented, female surfers from different religions & races,  surfers with disabilities,  surfers from the trans and non binary communities, surfers in conflict war zones, and surfers from impoverished communities, just to mention a few.

3. “Professional female surfer” Not true.  The definition of a professional sports person is someone who makes their sole living from it. I have never made a living out of surfing, I have always had another job. Please remove this. It’s a joke if the people reading your articles think I have made any good money from surfing. I earned some small amounts when I was younger by endorsing brands which given the opportunity now, I would not do on such a large scale unless the brand clearly aligned with and represented my personal beliefs on ethical fair trade, sustainability, and equality. I have been working hard to change my image and represent a space that is missing in the media. When we know better, we do better. I feel this has tarnished what I have been doing. I do not make any money from surfing now, so no, I am not a professional or semi-professional surfer. I’d like to point out that I’m also rarely a model, I turned down a job this week because the company sold real fur and I am not willing to promote this. I promote brands I respect because I believe in them, there is NO money OR free products changing hands.

4. “One of Britain’s top competitors” Not true. I haven’t competed for 10 years. If I were to compete in the British ranks now, I would definitely lose and am not embarrassed to admit it. Please save this credit for the women who are surfing competitively and earning their titles. I do not want to take it away from them.

5. “Sophie Hellyer, 30, from Westward Ho!, in Devon, says she has suffered a drop in media coverage since she decided to stop wearing a bikini.” I questioned whether me getting less coverage now was related to the fact I surf in a wetsuit more often than a bikini, this was discussed to highlight the issue that you don’t often see women in full wetsuits in most mainstream media, not to highlight myself for your sensationalist stories (and that said, Surf Girl and many other female-focused & independent media do include these images). My point, unfortunately, is proven by the photos you have included in your articles. Sport is supposed to set you free, not make you feel objectified and as if you should fit into a pretty little box to participate.

6. “She also accused some men in the surf world of being “incredibly disrespectful and unsupportive”  My statement was, “The majority of male surfers are lovely people,” most of my best friends are male surfers who I love and respect, but yes, there are definitely the odd one here or there that are disrespectful and unsupportive, please see the trolls comments on your articles. Please do not twist my words and make me sound negative here, it is not the truth.

7. “It does not mean I wear black and have hairy armpits.” As discussed – there is nothing wrong with wearing black or having hairy armpits, I often have both, it’s just not a compulsory part of believing in the social, political and economic equality of the sexes. Taken out of context.

8. “I personally don’t like surfing in bikinis; it’s impractical. They come down all the time, I get sunburnt, wax rash, slip off from sun cream and always cut myself on the reef.” I also live in Ireland, where it’s obviously too cold for a bikini anyway. My quote that I referred you to was “I really like my wetsuit. It keeps us all equal. It emphasizes neutrality.” I still wear a bikini on holidays sometimes, but I often opt for leggings or a long-sleeved rash guard to protect from the elements, and I also personally feel this is more respectful in Muslim countries like the Maldives. What I wear is my personal choice, which I am lucky to have, and just highlights to me the issue that so many women do not have such luxuries of what they wear in sport, making surfing more inaccessible to them. This is not about the women who are wearing bikinis, it’s about the patriarchal culture that places the blame of over-sexualization on the women who wear them.

I completely agree with what Steve England, The Editor of Carve Magazine said, and I am concerned about what 12-year-old girls (and BOYS) feel they have to be to enjoy surfing, and I think a more diverse and truer representation in the media of the worldwide surfing community is one of the solutions.

I’m glad we have that cleared up and I look forward to hearing from you in the morning when you have made the amendments, or alternatively unpublished the articles.

Sophie’s note: A massive thank you to the Independent for giving me the opportunity to share my voice. Especially to Chloe Hubbard, Assistant Editor, who was the first female journalist to reach out to me, and Rachael Revesz, Commissioning Editor, for editing like a boss and allowing me to keep my voice.

Editor’s note: Of yet The Times has not made these edits nor taken their story down.