URBNSURF Melbourne Is Officially Full and Ready For Waves 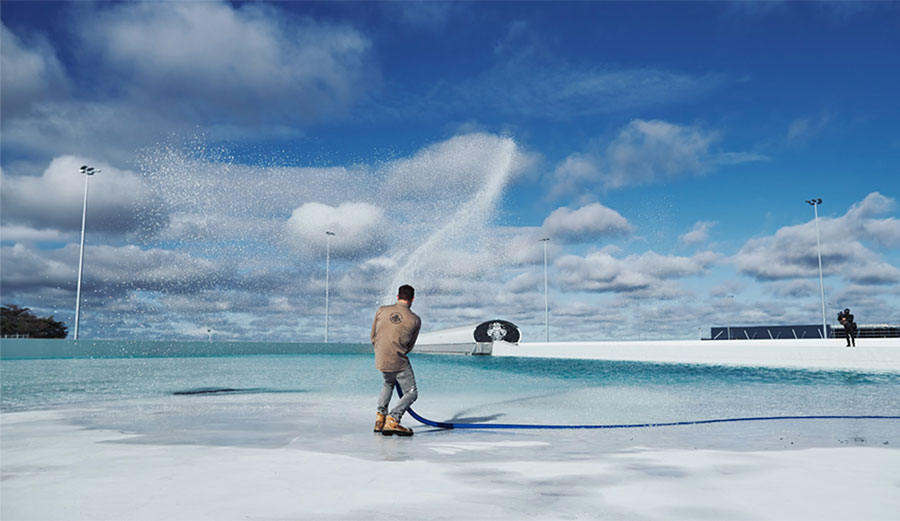 The pool is full and ready for its first waves. Photo: URBNSURF / Ed Sloan

Late on Friday evening in Melbourne, Australia, someone cranked open a valve that began pouring water into an empty, two-hectare lagoon. For the next four days, the level of the water rose until URBNSURF Melbourne’s newly constructed pool was filled to the brim.

“After years of hard work, it was a huge moment for us to crack the valves and begin filling our lagoon,” said Andrew Ross, Founder of URBNSURF. “It took just four days to fill our slice of paradise in Tullamarine, and we’re excited to welcome surfers from Melbourne, Victoria, and around Australia to catch perfect waves with us this summer.”

The fill was expected to take up to a week, but when the crew had a look on Saturday, things were going much faster than they expected. “By mid-Saturday morning,” a press release read, “the channel was already full, and water was spilling over the bank edge of the Reefs (our advanced waves) and into the Peaks (our intermediate waves).”

The pool is enormous: 22,000 square meters or 236,806 square feet, so it was crucial that everything went smoothly. The development and facilities teams worked around the clock to make sure nothing went wrong. “By Monday evening the water was lapping the shoreline,” the press release continued, “and on Tuesday we shut off the valves, and the lagoon was still. Ready for waves.”

Although seemingly countless surf parks are popping up around the world, this will be the first one in Australia open to the hungry surfing masses. And while it’s not ready to have its doors opened just yet, it’s getting very close. “Over the next few weeks,” they explained, “we’ll be working closely with Wavegarden to ramp up from ripples to runners and reeling tubes. It’s a highly technical, considered process, and it’s not something we’ll rush.”

Once all that is done and waves are rolling through at full-height, Josema Odrioloza, the inventor and founder of Wavegarden, will load up what they’re calling the “wave menu,” which will have 16 different waves to begin with.

Opening day has been a long time in the making. Back in 2012, Andrew Ross found himself at Wavegarden’s headquarters in San Sebastian, Spain. He arrived there a bit skeptical, but the surfing of one Gabriel Medina quickly put any worries he had to rest. After watching for a few hours, he was invited to try it himself, and he was sold. Exactly one day later, he snagged the Australian rights to Wavegarden’s tech.

Now, seven years later, that first wave Ross caught has turned into a pool of its own. While only time will tell how much interest Australian surfers have in leaving the ocean for a man-made wave, judging by the crowds in lineups Down Under, there will be more than a few willing to pony up a few bucks for a guaranteed wave.