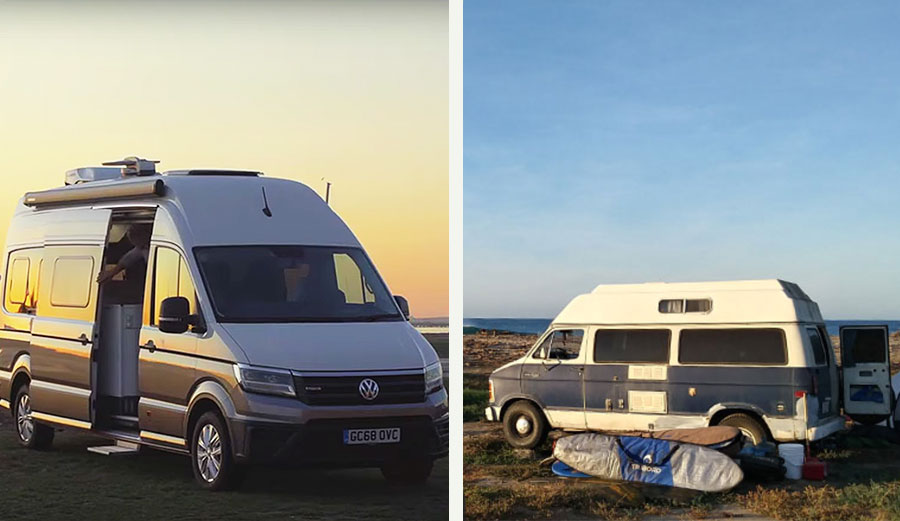 Before I get started, let me warn you of something: there’s going to be almost nothing about the 2020 Volkswagen Grand California Hotel in the following paragraphs. Scroll down to the bottom for a video and a link if you’re into specs. With that said, let’s get going.

I have this van that lives in Mexico. It’s a real piece of shit, full of rust and dust. A 1981 Dodge with a queen-sized bed and hilariously ugly linoleum. There’s something wrong with the timing chain, I think, so it makes an odd pinging sound when it’s going up a hill. If you’re putting it in reverse you’d better get some earplugs, because a clang of ungodly volume is about to emerge from the transmission. It scares birds away from a radius of about a mile. The back doors are so rusted that when you drive down a dusty road (of which there are many in Mexico), a fine film of dust coats the entire interior. When you stop and tumble out, a cloud of that dust hovers around the passengers, sparkling in the sun. It’s on your teeth and in your nose, under your collar and stuck to your sweat. Oil disappears from the engine, about a quart every tank, but I have no idea where it goes. The exhaust isn’t particularly blue so it’s not burning it, and there’s never a big oil stain under it when it’s been parked for a few days. But still, that oil just disappears.

It lives in southern Baja because we found a box of puppies a few years ago and decided to leave it and fly them home. It started its life with us on Vancouver Island, took us to sunny Southern California, then down to the southern tip of Baja. Now it waits patiently for us there, full of surfboards and spearfishing gear and melting wax. Last time I picked it up, the fridge was basically all mold — maybe it was the eggs we’d left in there that exploded from the heat or maybe it was the butter. Here’s the ol’ girl in her element:

A few years ago, the wiring in the back caught on fire while I was driving. There I was, driving along happily, thinking about waves or worrying about the pinging sound when all of a sudden the smoke hit me. In the span of about two seconds, it was so thick I couldn’t see, which generally makes driving difficult. It was that smoke that comes from burning plastic; the kind that burns your nose and makes the tiniest of breaths impossible. I pulled over, frantic to find the source. Ripped out the doors on the compartment where the battery was, broke a bunch of the legs off the bed, and finally found the back battery that runs the lights and outlets. The wires were burning as I watched because, like an idiot, I had somehow managed to put the positive on the negative. Of course, since I am an idiot, I didn’t have a fire extinguisher, so I just tore the battery out, threw it on the pavement, and proceeded to grab the burning wires and yank them until they hung from my fingers like melted tentacles. That was the end of the lights and outlets, until two years ago. I spent a happy afternoon on a beach in Mexico, tracing the snarled web of burned wires throughout the van and carefully, lovingly replaced them all. My back burned to blistering and I was drunk on weak Mexican beer when it was done. But flicking the lights on was the most satisfying thing ever.

And despite all that — or maybe because of it — I love that van like I love a great friend. Sure, she’s a real bitch sometimes. Cantankerous in the mornings, crabby when she doesn’t have fuel, and slow to react to my demands, but we’ve done some shit together. We’ve been in situations that required us to work together, me stroking the dashboard lovingly and whispering sweet nothings while cramming my foot on the gas and hoping against hope we’ll get out of this godforsaken sand before nightfall.

In my head, it is sad and lonely while it waits in storage, just hoping against hope that I will return and fire her up again so we can charge down a dusty arroyo together with sweating cans of Tecate in the cooler and mariachi music breaking through the static on the radio every now and then. But it’s just a van, so that’s probably not the case. My partner wants me to sell it so we can get something better, but I can’t even imagine doing that. She’ll win one of these days, because I know she’s right as she usually is. But I won’t be happy about it.

With any luck, we’ll get $1,000 for it, which is $500 less than we paid for it about a decade ago. We’ll get something awesome and reliable, like the 2020 Volkswagen Grand California Hotel. It’ll have all the bells and whistles. Unlike the old VW vans, it will have an onboard bathroom and a shower. I won’t have to worry about the pinging sound or pet the dashboard lovingly. Oil will not vanish from it like a whisper in the breeze and it will not fill with that fine Mexican dust. It will start and drive and have lights that turn on at the flick of a switch. And I’ll miss my old Dodge because that old Dodge is part of my story. Sure, a 2020 Volkswagen Grand California Hotel could make some stories, but they won’t be nearly as exciting as being stranded in the middle of Mexico because the fan belt blew up.

But still, how sweet is Volkwagen’s new van? If you actually want to know about it, click over to Motor1.com. Unlike me, they’ve got the specs covered.