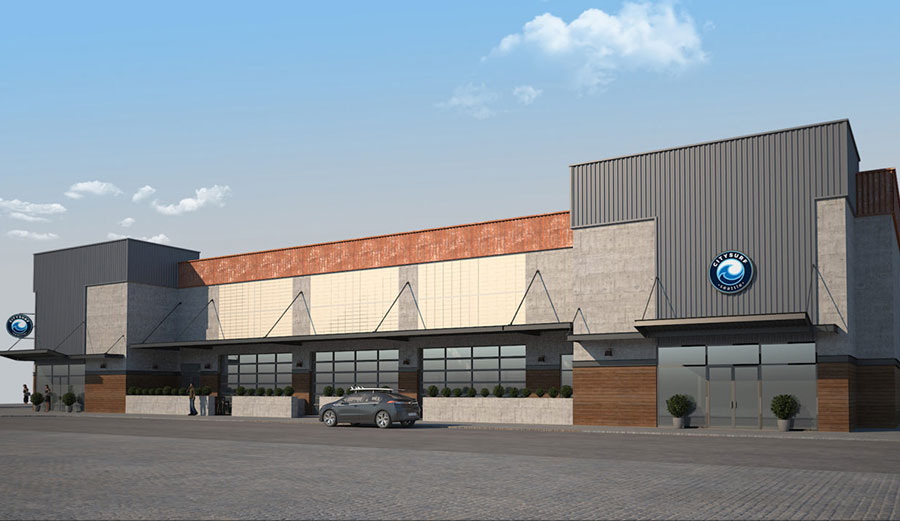 Surfing is getting weird. It’s always been weird, but that’s because of the characters who, for some odd reason, are generally attracted to it. It’s wonderful. Now, with the rise of the artificial wave, surfing itself is getting weird.  And it’s about to get weirder in the Pacific Northwest because a standing wave pool is coming to town.

CitySurf Seattle announced that they’ll be the newest purveyors of standing water stoke in Issaquah, Washington, home to such tourist attractions as Poo Poo Point and the banana slug, the largest land mollusk in North America.

According to Geekwire, CitySurf Seattle has pending patent on a new technology they’re calling “Rogue Wave”, which is very ironic since rogue waves are nearly impossible (nearly!) to predict and a man-made standing wave inside a building in Issaquah, Washington is the opposite of that. The machine is a behemoth, though–it’s able to move a quarter million gallons of water every minute, forming a standing wave that’s 32-feet wide and up to five feet high.

Now, it might seem odd that with all the new wave-making technology currently seeping into middle America that a city on the coast would choose to make what is essentially a river wave inside a building. And it is, but it’s also great because it’s in the name of fun and if you are a person who rips on river surfers or standup paddlers or, God forbid, our prone brethren affectionately known as dick draggers, then you, my friend, are no fun and you should sit down and have a stiff drink. Let people do what they want without fear of your pointless, toxic judgment! So sayeth I!

Three years ago, the founders of CitySurf Seattle went to Munich, Germany. It was there that they saw City Wave, a standing wave in the airport that’s been home to a couple of events. Trisha and John Hoss decided that they needed to build something similar at home. “As gravity sports people (we grew up waterskiing, wakeboarding, snowboarding and eventually wake surfing) we were mesmerized by watching the surfers, from beginner to pro on the standing (outdoor) wave,” Trisha Hoss told GeekWire. “The energy of the spectators was electric. My son and husband attempted to surf, as I watched for hours/days with a beer in hand, listening to the music. This is where the vision of ‘bringing surfing to the city’ was born.”

At first, John tried to go the easy route and simply import the technology for the wave machine in Munich. After spending about a year, it turned out that the “easy route” was to just build one himself. Over the course of the next two years, he made a man-made wave using technology that’s found nowhere else. “To our knowledge, there are not currently any machines that compare to our technology in the U.S.,” Trisha Hoss told Geekwire. “The closest comparison would be the man-made, standing waves, like in Bend or Boise, or a naturally created, standing river wave that kayakers use on the Payette River in Idaho.”

CitySurf Seattle is planning on doing things a little differently than most. “Their waves are shallow, and although fun, not transferable to real surfing,” she said. “These waves are currently used (mostly) to attract customers as part of an overall experience. The Rogue Wave will be the primary revenue generator at CitySurf.”

Rogue Wave, while powerful, doesn’t take up all that much space–a good thing for cities. Instead of a football field-sized pool, a wave machine can be installed in as little as 2,000 square feet. Right now, it looks as though surfers will have to pay around $30 for an hour of manmade river wave surfing.

Right now, they’re in the process of looking for a venture partner, much like Doug Coors (of Silver Bullet fame) and NLand. They’ve acquired a permit to being building a 10,000 square-foot building on 1.24 acres, and they’re banking on the future of surfing dramatically changing. “Ideally, this partner would be local and excited to champion indoor surfing starting in Seattle. With surfing coming to the Olympics in 2020 and millennials driving the consumer experience, we think we’re on the cusp of an activity that’s about to explode.”

Keep up to date with CitySurf Seattle on Facebook.

Correction: a previous version of this story stated that Trisha threw shade at Kelly Slater Wave Co and WaveGarden technology. Turns out she was talking about other standing wave machines. “For the record, however, I would NEVER throw shade to Kelly Slater or his wave,” she wrote in a very nice email considering the circumstances. “He’s a surf god and his pool is amazing. In my very humble opinion, I just don’t think it’s realist for the masses to enjoy his wave in too many places because it’s massive and financially not probable. That said, hope it works for him and the WSL.”