This is a common situation in Praia do Norte. In fact, this same thing happens in several places around the world on a regular basis, only Nazaré happens to be one of the heaviest.

This particular case was put on display via a live camera feed from Beachcam. Before the video even started, this surfer had already waited patiently for the right time to get into the water safely. It was sad to read comments like “drowning live” and pointless commentary from people watching with no knowledge of the place or the situation. Luckily, there were also plenty of people watching with good intentions, sharing their own messages of support and encouragement. After it was all said and done, the surfer in question revealed himself as Sergey Mysovsky, sending out an important message to all the haters on duty: Think twice before writing nonsense while sitting on the couch. I couldn’t agree more.

Below is a follow-up conversation between Sergey and Beachcam Director Luis Zagallo:

Tell us a little bit about yourself.

Sergey Mysovsky: I’m from Saint Petersburg, Russia. I’ve been surfing since 2007 and kitesurfing since 2006. I first came to Portugal in 2013 for the kitesurfing world championship (KSP) but the competition was canceled and we traveled around Portugal.

I first tried kitesurfing in Nazare. The waves were small (around 3-5 feet) and since that moment I dream I would someday come back to real Nazaré and catch some waves. Last year, I trained for big waves and finally came here in early December 2017.

While trying to paddle out, what were the biggest challenges?

It was not easy. The main difficulty is when you think you have some room and time to paddle. But you can get stuck when the waves have no rhythm. And in this middle ground, you’ll sit in a whole set of waves, then turn around and go back to where you started.

What was the size of the shorebreak?

I dont know actually. Sometimes it was around 13-15 feet or maybe 4-5 meters.

Were you there alone or did you have jetski backup?

My friend was in the lineup and sent a driver to me but it was high tide and very dangerous for him. After a couple tries, I decided to go by myself.

Never thought about giving up?

Actually, no. I was hungry for the waves!

Do you consider Nazaré as one of the gnarliest waves in the world?

Exactly! Nazare puts you in your place. The pure power of the ocean and nature are here like nowhere else in this world.

Note: To close it all out, this is the result of Sergey Mysovsky’s effort. Maximum respect, mate. 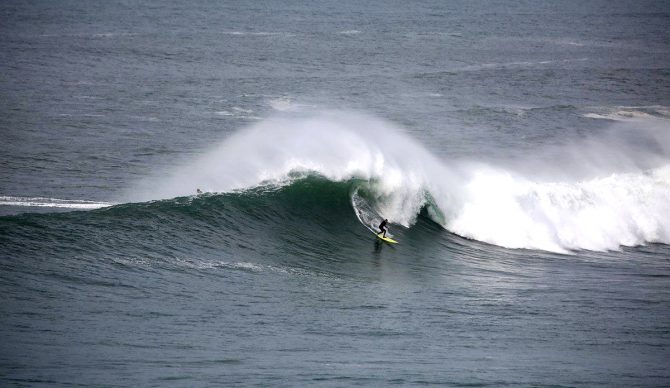