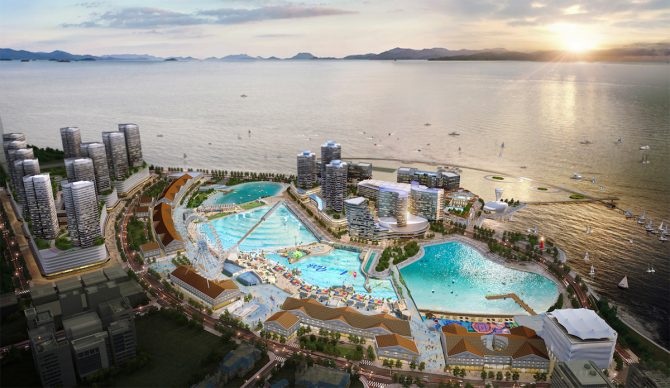 It took just a year and a half to build “the world’s largest surf park,” a project that broke ground in May of 2019 and opened its doors to the public this week in South Korea with 167,000 square meters of oceanfront property. By contrast, when Wavegaren opened its first facility to the public in 2015, Surf Snowdonia came with a price tag of just £12 million.

Of course, that venue was truly just a surf park, more or less, whereas Wave Park, the new project on Turtle Island is an all-out resort. The pool that features 20 different wave types as well as waveless zones for kayaking, SUP, and swimming is the centerpiece of what will become a much larger attraction in its second stages, which are soon to come as construction continues. When it’s all said and done, Wave Park will consist of its wave pool plus six hotels, convention centers, marinas, and museums.

As for the wave, Wave Garden is touting the Cove pool as having “a world-class air section that rivals any other on the planet.”

“I’ve surfed every credible wave park in the world and this was my best surf experience,” said Jacob Szekely, who tested the wave. “The clear water and wide variety of awesome, open-face and barrel waves is incredible. However, the new air section is simply insane. On the first day of testing, I landed the best aerial of my life.”