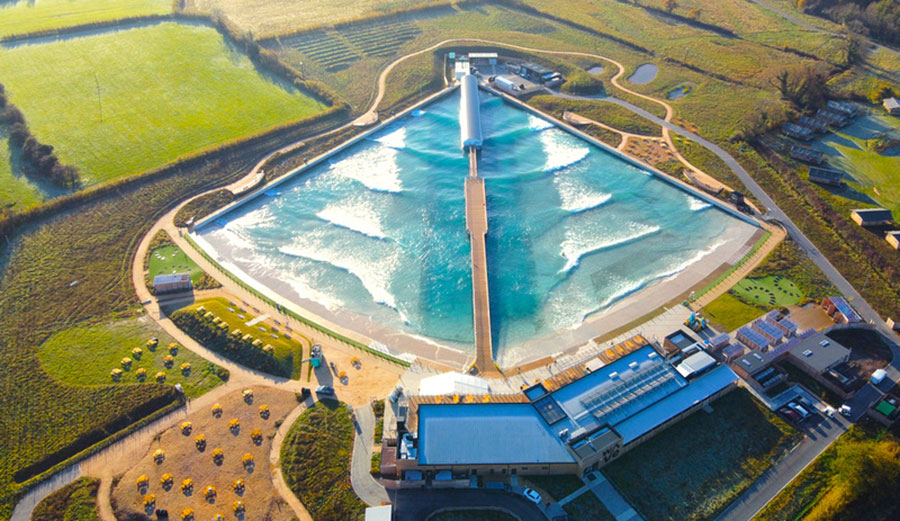 The Wavegarden in Bristol is an example of what the projects in Japan might look like from the air. Photo: Wavegarden

Wave pools are all the rage lately. For years, the waves they produced were almost there, but not quite. But now, as technology has gotten better and better and the waves they produce are fine-tuned into exactly what a surfer wants, they’re popping up all over the globe. And recently, Wavegarden dropped a press release that, along with a velodrome company called JPF, it’s building seven more pools in seven different regions of Japan.

Back in 1934, the world’s first wave pool opened to the public. It was at the Wembley Swimming Pool in London, and it wasn’t a wave pool in the sense that we know them today. It was no good for surfing, which, since surfing wasn’t even a blip on the general public’s radar, didn’t matter all that much. The pool was 200 by 60 feet, and electric pistons moved massive paddles, generating waves that swimmers bobbed around in. It was a novelty at best, but the first real seed had been planted.

As the years went on, however, surfing took hold, imaginations ran wild, and developers dripped salt-water from their noses onto the grindstone. Little improvements were made — three decades later, the Summerland Wavepool in Tokyo, Japan, opened to surfers. Then, in 1969, the now-famous Big Surf opened in Tempe, Arizona. It was an enormous facility: at 20 acres of Hawaiian themed luxury, Big Surf included a 300- by 400-foot wave pool developed by an engineer (and non-surfer) named Phillip Dexter. The wave there, however, didn’t hold a candle to the waves the ocean created. But still, we tried to recreate those waves.

In 1985, Tom Carroll won the World Inland Championship in Allentown, Pennsylvania. The wave there, compared to the waves pools pump out now, sucked. It was yet another step towards the future, though, and over the next few years, more and more opened, usually only for a few years before costs and lack of interest forced them to close. Typhoon Lagoon, Ocean Dome in Miyazaki, Sunway Lagoon in Malaysia — all were viable surfing waves, but none were really good enough to move the needle.

In 2011, the surfing world was shaken up by Wavegarden’s first images from its testing pool. I spoke with Josema Odriozola, technical director and co-founder of Wavegarden at the time, and even though the tech was still being slapped on the bottom like a newborn baby, it was clear that something fundamental was going to change in surfing. And change it did.

Now that we’re up to speed, back to the Wavegarden press release. The new pools will be built over the next seven years. The partnership between Wavegarden and the JPF Group is a good one; Wavegarden, of course, built the tech while JPF has been responsible for the successful management and development of six velodromes.

Wavegarden is already in Asia, with the largest surf park in the world. The Wave Park, near Seoul, is an an absolutely enormous facility, built with the help of the Daewon Plus Construction Group, one of the main real-estate and theme park developers in South Korea.

Back in July, Wavegarden also announced it would be entering the Latin American Market, too. “For the next 10 years, the Brazilian developer, KSM Realty, will be Wavegarden’s national representative,” a Wavegarden representative said. “Following the success of Praia da Grama, the world’s first tropical beach with artificial waves in a private condominium estate, KSM is now planning to create several similar developments throughout Brazil.”

Also in the works is a Wavegarden Cove in Perth. In the UK, there’s a proposal for a project in Manchester that only recently got the green light. The company is expanding its reach quickly. “Wavegarden has seven facilities in operation and currently five projects in pre-construction/ construction phase,” the release read. “Garopaba, Brazil; Coachella, USA; and Sydney, Australia. A further 47 are under development across five continents.”

On the backs of all those other pools in the works, it’s clear that, while there are other wave pool outfits, Wavegarden’s announcement puts them squarely in the lead for the race to wave pool dominance.