Aggro Vibes in Lineups and Fighting for Waves? Turns Out It’s All Animal Instinct 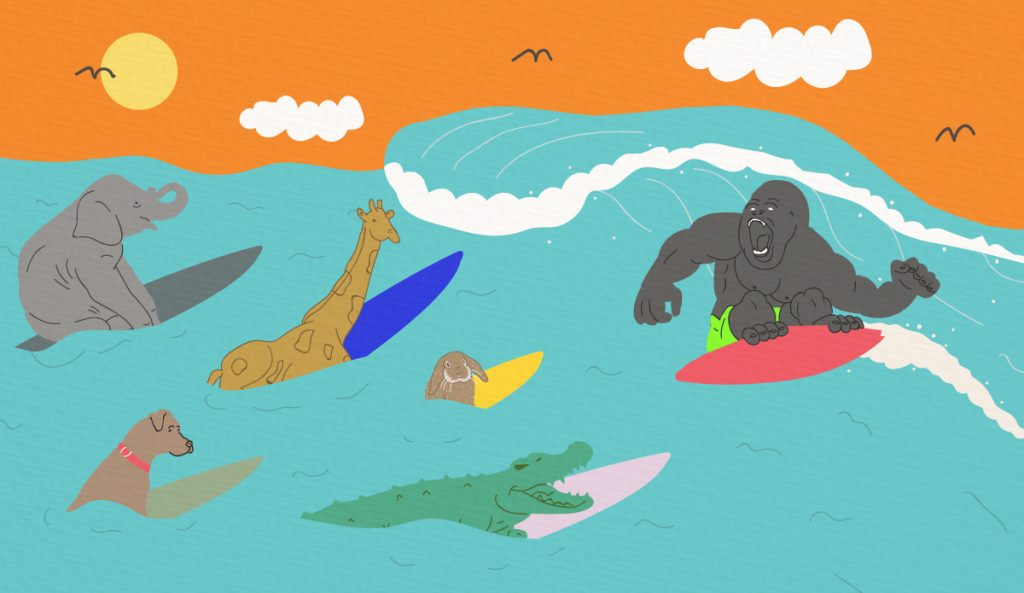 It was maybe the fourth time the guy in the bright blue wetsuit was chewing out someone that he’d dropped in on. Then a big brawler type with a shaved head and neck tattoos turned. “Hey,” said the big guy, calmly but directly. “You’re pissing everyone off. Stop, or leave. NOW.”

Without another word, the big guy put his head down and started paddling toward Blue Wetsuit, who proceeded to paddle away toward the beach all while shouting things like, “What the fuck, man? I’ve got as much a right to surf here as anybody!”

To date, this is the wildest display of lineup regulation I’ve seen at Lower Trestles. It felt primal. Like swiftly-administered justice dealt to a rhino acting out of turn at the watering hole.

As it happens, the comparison isn’t far off. There are a number of parallels that exist between animal societies and the way human surfers compete in crowded lineups across the world. Maybe more than any other individual sport. According to Marc Bekoff, ecology and evolutionary biology professor at the University of Colorado, Boulder, and fellow of the Animal Behavior Society, that’s because humans are animals after all.

Bekoff has studied all sorts of animals and their behavior over the years – from coyotes to wolves to domestic canines. He explains that in the same way competition is heightened at more crowded surf zones where the resource (number of waves) is finite, among many animal species competition is often more fierce when things like food are limited. In such cases, pecking orders become the modus operandi.

“In some animal groups, some higher ranking animals may get priority of access to food, which could be a limited resource,” Bekoff explained to me. “So you might have a pack of coyotes or a pack of wolves… where even if another animal has, say, killed an elk, they don’t necessarily have first go at it if they’re a lower ranking member of their pack.”

Rank, Bekoff explains, is established a number of different ways among animals, including in some cases by size, or a “don’t mess with me” factor. It isn’t hard to imagine a lineup that operates similarly – most notably Pipeline, a place that’s gone through its fair share of regulatory forces including the aptly named Wolf Pak. All of these groups, as Freddy P once explained to us (below), have enforced a set of rules for who would get which wave on any given day at Pipe. And if you went on the wrong one, he said, “You might get slapped or yelled at by a very scary-looking human.”

At other lineups, though, where pecking orders aren’t firmly regulated, the story is a little different.

“Humans in a surfing lineup [demonstrate] a concept in ecology called scramble competition,” Dr. Michelle Rafacz, assistant professor of Biology at Columbia College Chicago, told me in an email. “Resources (or even mates, in many cases) are limited, and so every individual is ‘scrambling’ and competing with everyone else for the resource.”

Scramble competition can look different depending on the animal. For instance, in some beetles scientists have observed that smaller ones are actually better competitors than bigger ones when they’re scrambling for a mate or shelter because they fit in smaller hiding places and “takeoff more quickly and thus reach females before larger males.”

The parallel in lineups depends on the wave, but a few important attributes might be how quickly you paddle or how well you read where waves are likely to break, etc. Compared to a lineup like Pipe, being bigger and more intimidating may be less important at, say, a moderately crowded beach break where peaks are popping up more randomly. More important is the physical fitness to get to each peak quickly.

In the animal kingdom, there are also equivalents to a surfer burning someone else – a dynamic that boils down to ignoring the unwritten rules, or cheating.

According to Bekoff, in the animals he’s observed, “individuals who break the rules are labeled as cheaters and excluded from group dynamics.”

That’s right. Animals have their own way of labeling another as a kook.

So, who are the kooks in the animal kingdom?

Among the coyotes Bekoff’s observed in Grand Teton National Park in Wyoming, it’s young coyotes that renege on an invitation they extend to another pup to play. “Young animals don’t want to be labeled as a cheater that says, ‘Come play with me,’ then they try to beat you up, eat you, or mate with you,” he said.

As in surf culture and lineups, being labeled a kook can have lasting consequences. Either an animal gets driven out (see also: our Blue Wetsuit friend above) or has no option left but to leave because every other member of their pack ignores them.

Most fascinating of all is some animals demonstrate a behavior that parallels localism or local favoritism so often observed in surf lineups. It’s a phenomenon Bekoff calls “residency effect.”

In some fish, Bekoff explained to me, lower-ranking individuals feel emboldened to do something they wouldn’t otherwise do when they’re on their own turf. Or, they enjoy priority access to a resource.

The parallel to surf is a trope that any surfer worth their salt knows all too well. For better or worse, at surf spots around the world, locals often flex their right to more waves by virtue of the fact they live close by.

That the behavior of surfers in lineups across the world would mirror animal behavior in the wild is no surprise. But what makes surfing unique among so many other individual sports including skiing and snowboarding, skateboarding, and the like is how expressly overt competition is – which is likely due to overcrowding and scarcity of good waves. Competition, ranking and enforcing, localism, and cheating all exist, say, at a ski resort. But, not to the same degree and not in the same way they do in surfing. Not even close.

As for lessons that surfers can learn from the way animals compete to get more waves themselves, Bekoff has a few ideas.

“If you’re on your home turf and you get there first, stand your ground,” he said. That, at least, is how things are done in the wild. Though, we can’t in good faith condone this outright because it’s not hard to imagine getting punched for standing your ground against the wrong person or group.

“Another could be to expect that certain individuals will bully you or move you over,” Bekoff told me. Of course, what you do in light of that information in a crowded lineup may depend on your personality.

Finally, and this may be the most salient point, Bekoff says, “change your daily rhythms.” In the animal kingdom, it’s not uncommon for animals to wake up earlier or stay later to hunt, or to go to a different spot entirely, all to be able to do their business unencumbered. So, if you hate surfing your local when it’s crowded, find the times that aren’t (if you can), or stretches of beach that are less popular. Or maybe that’s exactly what you’re already doing and you can’t explain why. Two words: animal instinct.

Editor’s note: Marc Bekoff is the author of Canine Confidential: Why Dogs Do What They Do and a number of other texts about animal behavior. Learn more by visiting his website here.