What in the World Is a Wing? Allow Me to Explain 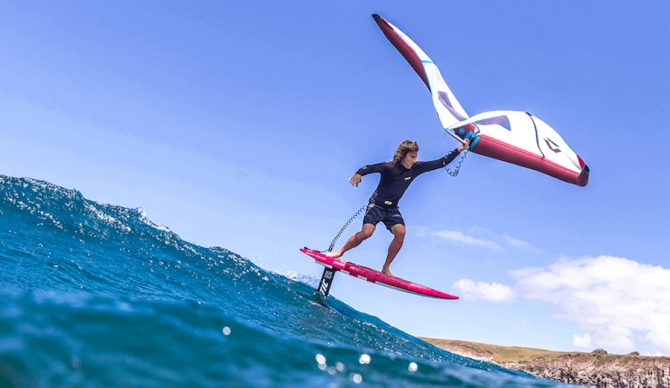 The wing is handheld, and easy to power up, or down so you don’t get dragged across the rocks. Photo: Duotone

For years now, wind sports has consisted of two dominant disciplines: kiting and windsurfing. Both have obvious advantages and disadvantages – with windsurfing there’s the speed and control, but an inordinate amount of gear. On the kitesurfing side, the same is true but with a definitive performance aspect given the intense amounts of speed a rider can harness. But again, the gear.

That’s why recently – and especially as someone who foils – I’ve watched with keen interest as the wind industry has developed these relatively low-profile tools called “wings.” Well, they’re new-ish. A wing is basically like the old windsurf weapons from the eighties (these things), but now they’re simply inflatable and not attached to the board, making them really convenient.

Wings mostly pack down to the size of a small backpack and can be used anywhere there’s consistent wind.  Some in the wind community still think they’re kinda kooky, but at a certain point, who gives a s***, right? Kiting and windsurfing take so much rigging, and not everyone has a five-mile stretch of sand nearby where they can learn and be dragged aimlessly by a kite without getting injured. With the wing you can capture the speed and power, and then cut that power off and just surf – or stay on foil – simply by moving your hands. I’ll explain in a minute. But basically, you don’t need the real estate you do for a kite or have to fumble with a windsurf setup.

The new ECHO is a wing for powered riding in all conditions! A huge advantage of the ECHO compared to softer wings, is its super stiff profile, achieved by the boom, battens and the new draft control rope. #foilwing #duotonefoilwing #wingfoiling #wingsurf #wingsurfer #loyaltothefoil #foil #settingthetone #duotonesports #fanaticsup #fanaticfoil

I’ve tried a couple of wings now including the Ozone Wing and the wing pictured above by Duotone. The Duotone Foil Wing comes with a boom, while some other wings use fabric handholds on the underside of the wing and honestly, I really like the boom feature because moving your hands is important (and sliding takes less coordination, frankly). For more power you move your arms down towards your body to feel that sweet spot in the wind (even moving your front hand back down the boom); too much power – which allows you to foil or ride a wave with speed to burn – simply let go and use one hand on the front part of the boom (or the handhold up front, top picture) to hold the wing as you utilize the natural speed you’ve created. There’s no releasing the kite or getting dragged all over the place in dangerous positions.

Two important features of the Duotone wings make them winners in my book: First, they come in a number of sizes so you can customize them to your specific spot. The lower the prevailing wind (say your local regularly gets 15-19 knots), the bigger wing you’ll need (measurements come in four sizes, 2-5 meters). If you live on Maui and get 25-30 knots everyday during the summer that’s perfectly lined up, then a four- or three-meter wing is more on par.  More wind, smaller wing (Duotone released its Echo for 2020 which comes in six sizes up to seven meters).

A good look at the “boom” that makes these wings easy to handle.

Second, the Duotone wing, specifically, has that really cool feature – the aforementioned boom: it’s adjustable to wind speeds. If the wind is lower, you adjust the boom smaller and pump the chambers up accordingly, exposing as much material as possible to the wind (think of it as making your parachute bigger). If the wind is stronger, you extend the shaft and there’s less material exposed so you don’t get dragged off your setup.This feature is mostly helpful in lighter winds, where a larger human like myself needs as much power as possible to get my chunky arse on foil (I liked to keep the boom really short using a five-meter wing). At this point in the early development of wings, the Duotones are arguably the most refined in the industry as more companies get on board.

There’s also a couple of important advantages to wings: When learning, there’ll be moments when you feel like a giant, dead crow, the wing flapping over you like the enormous appendage of a deceased bird in the middle of the ocean (river or lake). But this is how you learn wind theory and the wing allows that without kicking your ass completely. Wind theory is a different animal – hold the wing wrong and you’ll never get started. The most optimal condition is sideshore winds, where you can hold the wing at a 45-degree angle to the breeze to capture the most power while staying in control. Then you practice going up wind before turning to go downwind to surf swell (where the real fun is, IMO). It’s a giant game of trial and error and the wing allows that without much consequence, unlike a kite (check out this little read for a really solid wind tutorial).

Another is price. To learn, you simply need a longboard or a SUP, and the wing. No harness. No mast. So wings are priced right between $500 and $700, allowing for a less expensive entry point (the price goes up as you add a foil to the mix; hint: use as small a foil board as you can – the Craigslist market has become quite robust). So the wing is certainly an affordable way to get into windsports, or just make it more simple if you already know the gig.

I like to foil. I like simplicity. I like wind because it gives me more days on the water. The wing allows for all of that without much hassle. Keep it simple.