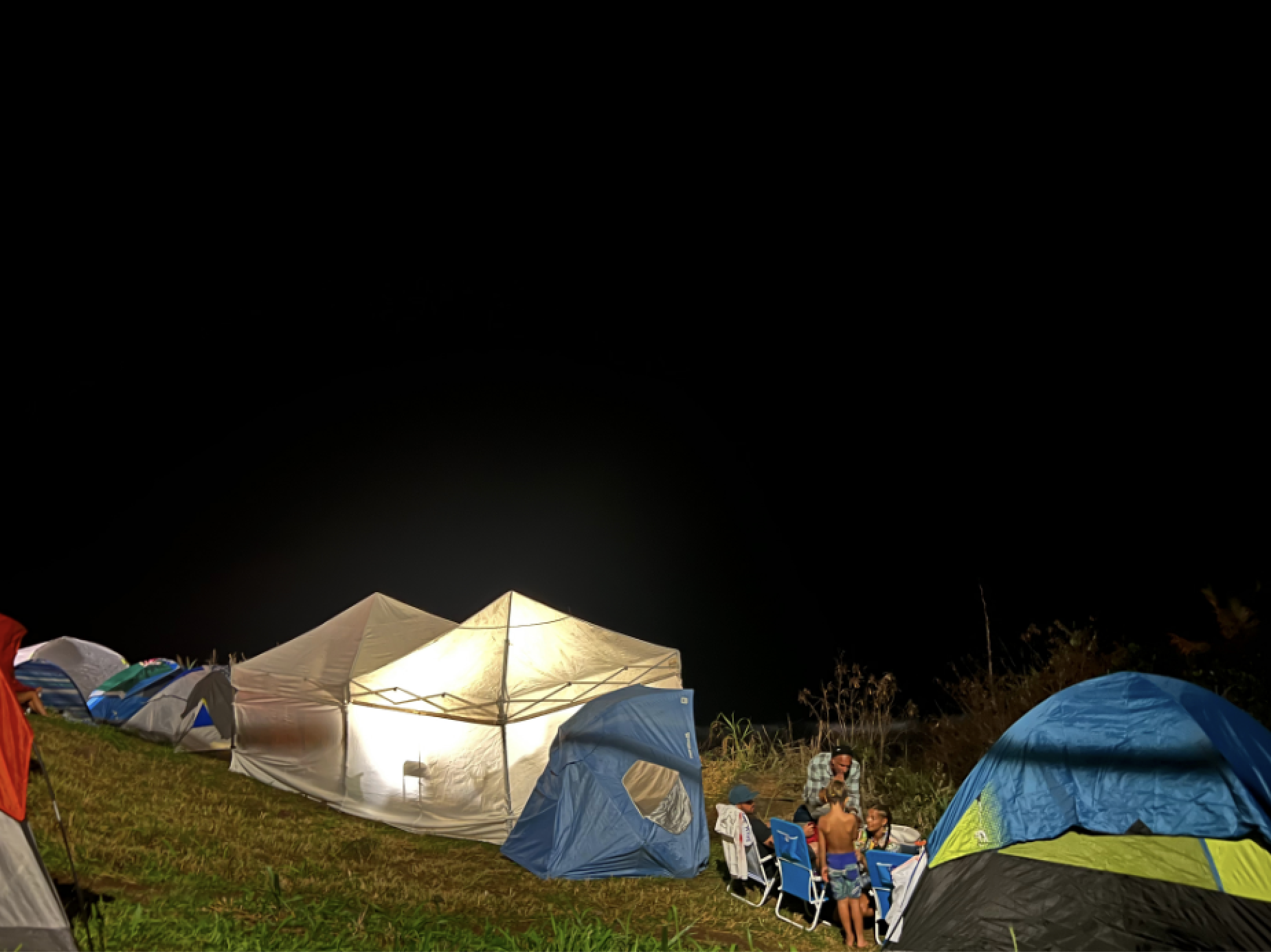 Posted up at the Eddie. Photo: Caroline Cross

Getting to the Eddie Aikau Big Wave Invitational was no easy feat. Sure, the surfers had to put in a lot of work to prepare for the prestigious competition but getting to Waimea Bay was no walk in the park for the spectators either. In order to claim a parking spot and a vantage point to watch the action from the beach or the surrounding hillsides, fans woke up in the wee hours of the morning, battled traffic, walked for miles, or camped on the beach or in their cars. With 35-50 foot waves and nearly 50,000 people gathered on the beach, it was an Eddie for the books. We caught up with some of the spectators on the beach and asked them what exactly it took for them to make it to the historic event. These are their stories:

“We drove up at 9 p.m. from town and got there at 10:30. We drove around, trying to find parking a mile down from Foodland and then we tried to sleep from 11 p.m. until 3 a.m. We left the car and walked down to the beach — we started out on the right side but it was already getting washed out so we decided to walk all the way around to the left side of the beach. We posted up there, slept in a huge crowd of people until the sunrise, and then watched the contest. It was crazy.” –Shae Foudy 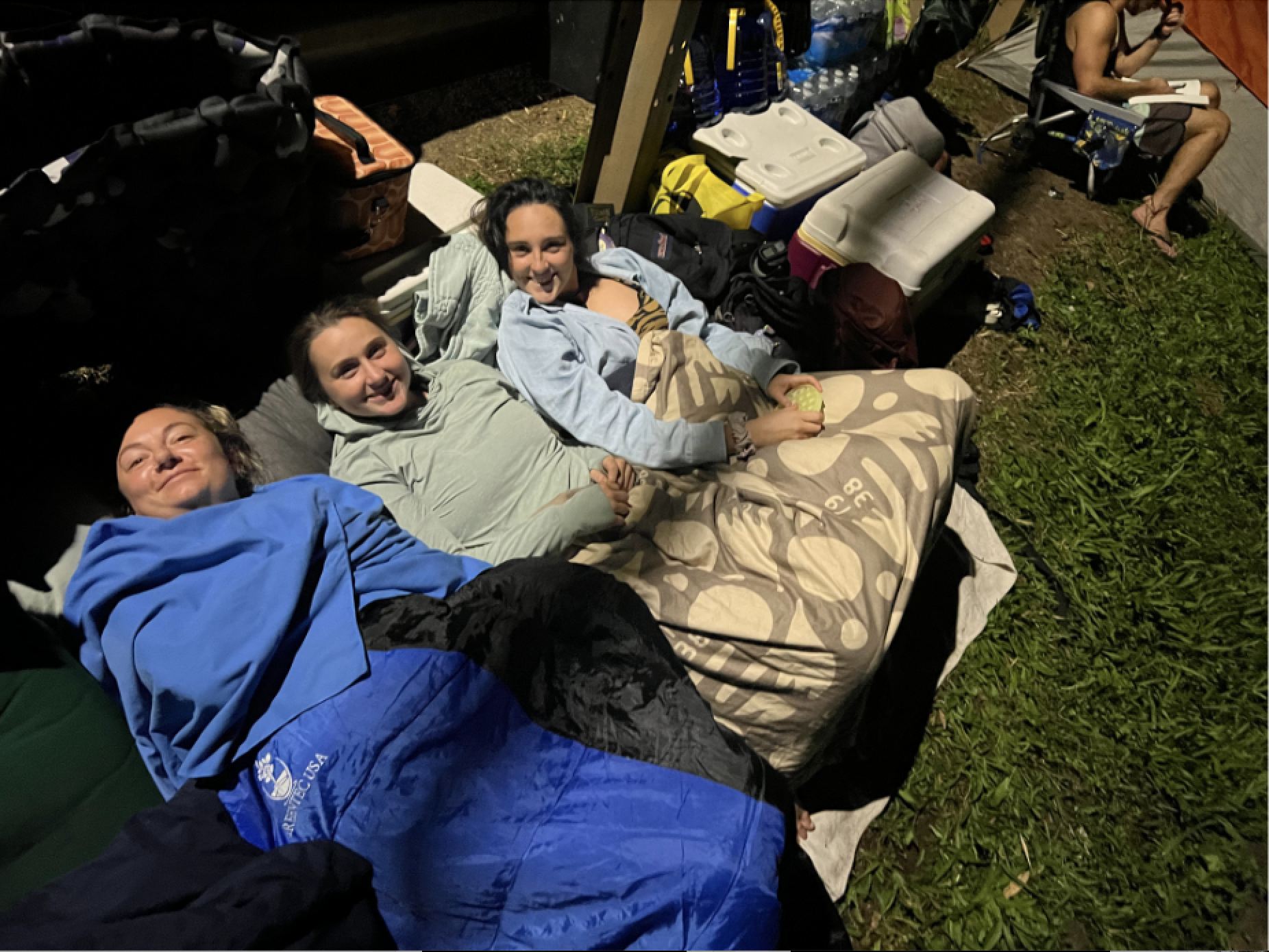 “We showed up Saturday evening at the bay around 7 p.m., people were parked and everyone was hanging out. Good crowd, good vibes. We pulled up, parked the van, met some people, and went down to the beach. Good music, good DJs, just lovely energy here on the North Shore. We met some new friends and met some old friends. We camped and people were driving by all night and woke us up around 4 a.m. howling at the moon. Once the competition started there were pretty solid swells and the crowds grew. But all around it was really great fun and really great surfing.” –Elvis (not the King)

“I woke up about 3 a.m. and left Kailua around four. There was a little bit of traffic once I got close. I had to park about 20 minutes away from Waimea Bay and pay $20 for parking. It was definitely much crazier than I expected. I’ve heard people say any spot is a good spot on the beach for a surf competition — that’s exactly what we experienced. If you get a spot, you’re lucky. It was very hard to find people. Pretty much it was a sh*t show. But it was definitely a wonderful experience and I’d do it again.” –Josh Ginting 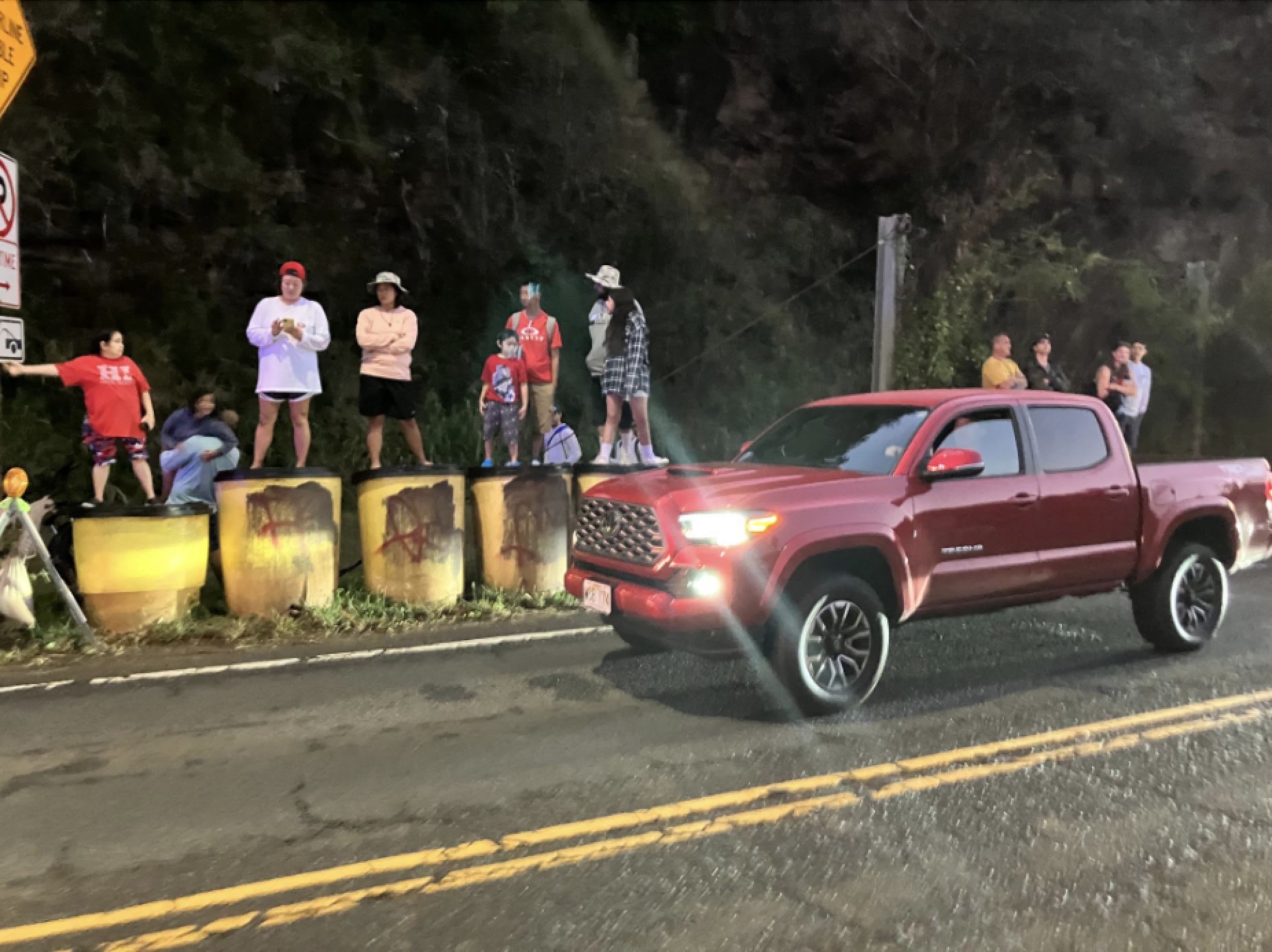 Everyone doing their best to get to high ground to catch a glimpse of the action. Photo: Rebecca Parsons

“I woke around 4 a.m. ready to go. Our standards were low; if we could get within six miles our plan was to run in. But we got within three miles, saw that there was a lot of traffic, and found the first parking space we could find. We walked over and got a spot on the beach, but we ended up climbing a cliff to get up and have a good view. I would recommend anyone to go, but also, please don’t because we need less people at this competition.” –Kip Touseull

“We made our to way Waimea at 10:30 p.m. and parked on the corner next to Three Tables, waited until 2 a.m. to head over to Waimea Valley to sleep in our car because that’s when it was supposed to open. We got there at 2:01 and the lots were full because they decided they were going to let people in at 12 a.m. We were the last car into the lot and then we slept in the car until seven, walked across, and met our crazy friends on the beach to watch the Eddie.” –Mckenzie Ayres

“We got here at 3 p.m. on Saturday and there were already 20 tents setup. We set up camp and staked out for the night. The cops came around 10:30 p.m. to kick out all the people parking and they were towing all the cars at the bottom of the hill. There was a DJ running his concert until 3 or 4 a.m.; it was non-stop. People were constantly flowing in; there was no break in traffic or people. People were letting off fireworks; it was like a reggae concert on the beach. I got four hours of sleep on the ground and it rained.” –Caroline Cross 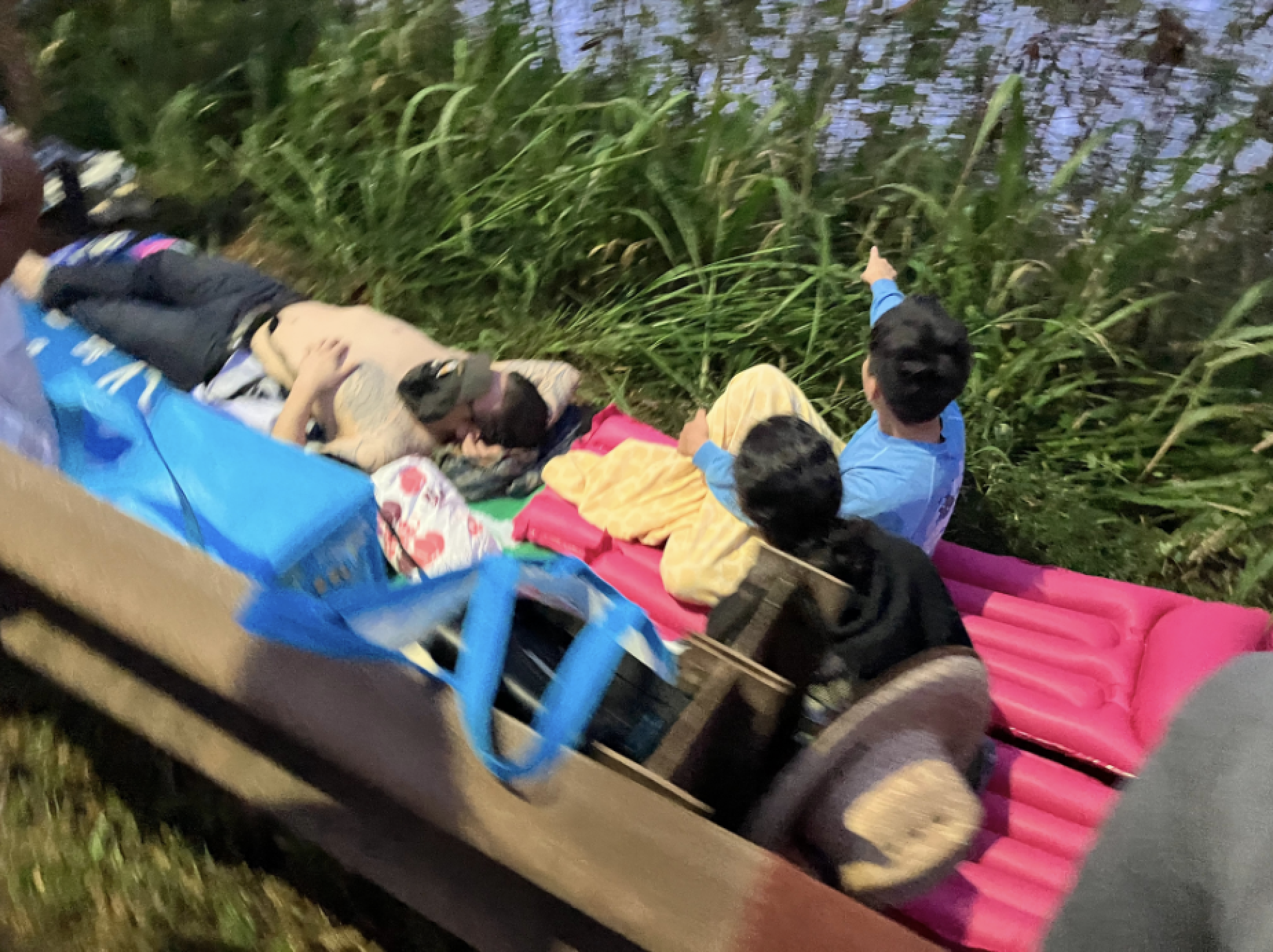 Sleeping and spectating from the hillside. Photo: Rebecca Parsons

“We’re from the east coast and knew this was a once in a lifetime thing, so we had to do it. We started our preparations Saturday morning — we had an early dinner and took a nap. We got on the road at 12:30 a.m. and got to Waimea at 2 and just missed the parking for Waimea Valley. They said they weren’t going to open parking until 4 a.m. but they were already turning people away when we got there. We drove down to Pūpūkea and walked down to Waimea. When we got here there were already so many people sleeping on the beach. Around 4:30 a.m., when the high tide came in, a wave came all the way up on the beach and everyone was dead asleep and got soaking wet and had to disperse.” –Flora Hu

“We came from town Saturday night and went a little past Waimea to go camping. These dogs started surrounding us and we saw three guys show up and we got really scared and started freaking out. Right before that we got rained out because it was pouring. Then we decided to park a little closer and slept until 4:30 a.m. and walked over. We got here and it was crazy. We tried to set up by the bathrooms and these people screamed at us even though we were trying to get out of their way. It was just one thing after another.” –Niki Kyriakakis & Anastasia Panagopoulos