What Luke Davis, Miley Cyrus, and Jesus Have in Common 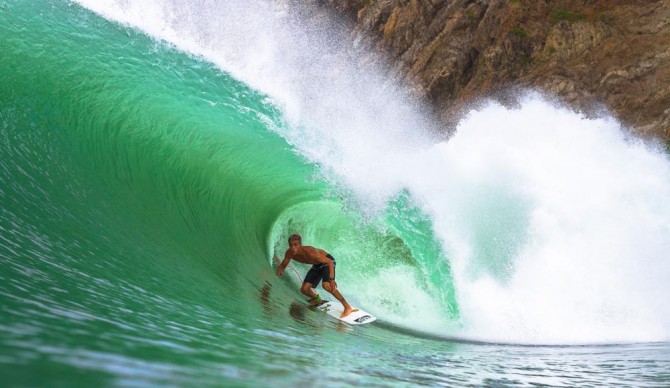 “The whole surf world is so narrow-minded…it’s crazy,” Luke Davis deadpans. “Sometimes I feel like I’m not even a surfer.” It’s late summer. His hair is green this week. He’s traveling through Africa right now after touring America for REEF’s most recent film, EXIT, which features Rob Machado, Shane Dorian, and Taylor Knox, among others. But Davis is the star.

“I didn’t really plan shit out. It just kinda happened,” Davis reveals. “The whole pro surfing thing is weird because when I was young the transition felt so natural. Now I’m doing the same stuff, but I’m traveling even more and [surfing] at a higher level. Sure I have a few obligations and contests, but I can go wherever I want whenever I want. And I think that’s what everyone truly wants but no one gets to do.”

Let’s put it this way — he gets to do a lot of things most of us don’t. Also consider he’s 22, with model-like good looks, living and partying in Los Angeles when he’s not off in some far-flung tropical locale…and, well, use your imagination from there. But he followed the lineage of many Orange County hopefuls before him — pushed into his first wave at Doheny at age three, contest jersey at eight, “sponsored” by nine, photos in ads by 10, traveling the world at 12. Then fast forward a decade and the once toe-headed grommet with a stylish forehand now resembles more of a saltwatery Dennis Rodman instead of your stereotypical all-American pro.

As a result, intentionally or not, he’s become a focal point of attention, adoration, and criticism – from within and far beyond surfing’s sandy walls. This happened shortly after his hair turned kaleidoscope neon. And his girlfriends turned supermodel. Because, if nothing else, in a vanilla swirl surf world, his starry life is something to talk about.

Many might not remember, but Davis’ big break came when Walking on Water’s Bryan Jennings tapped him and Tyler Hallen for a dream trip that spanned five continents and connected the groms with the likes of Tom Curren, the Hobgood brothers, Matt Beacham and other Christian surfers around the globe. The innocent 12-year-old quickly became the poster boy for everything that was righteous and wholesome about our sport. It was a self-described evangelical project. A far cry from a RESQ-Water endorsement.

“That trip was huge for me,” says Davis. “I got to travel around the world. I remember at that point, I was talking to my mom and telling her I was bummed out because Brother [Kolohe Andino] got to travel everywhere when we were 11 or 12. I was stuck at home. That’s when that whole thing started. It gave me a boost to get to travel so young with strangers to different parts of the world. I was glad my parents let me go. When you’re young, the people you hang out with mold who you become. Those trips always put me around genuine, good people and, at such a young age, that was important.” 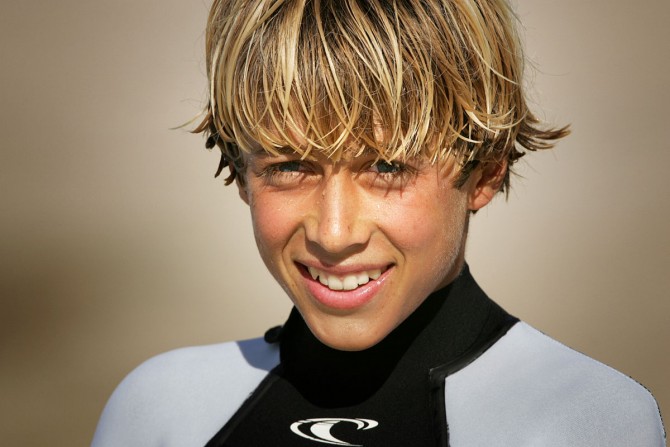 And we see this often in Hollywood: A gifted child’s likeness comes to represent something impossibly wholesome. Typically one word: Britney. Christina. Miley. Drake. And then, in a flash, you’re not a kid any more. It’s time to try and reclaim your public persona. Maybe even rebel against it. Very publicly. Suddenly, you’re not. That. Innocent. And while some suspect that Davis, like the Disney stars the public loves to masochistically cheer and crucify (depending on the day) as they roller coaster brazenly through life, might resent his image as a child and what it represented, he says that’s not the case. Not at all.

“I’m thankful my parents raised me really well,” says Davis. “We’d do bible study every day at my house. My parents set a good foundation for the path I was going to take…”

I’m still a firm believer in God to this day, but it’s really tough…things get thrown at you day in and day out. I mean, you have to fuck up a few times; you’re not going to make perfect decisions your entire life because then there’d be no learning. You have to go out into the world and figure it out for yourself.

Davis finds himself drawn to the glitz of Los Angeles. But not for hopes of stardom or fame. It’s because the melting pot of LA strangely comforts him; reminiscent of the big, diverse world out there that’s fostered his character development while he searched for waves. The same world he traversed with bible in hand during his pubescent years. Davis finds solace in the abundance of culture in Los Angeles, explaining it’s a welcomed step into the ether compared to his conservative hometown.

“If I go back to San Clemente after a surf trip, I’m bored out of my mind,” Davis admits. “Cities are a focal point of different people and religions from all over the world. They’re melting pots…The nice thing about LA is there are tons of different types of people doing cool shit…whatever it is, art, music or anything — someone is always doing something creative. I also love how open-minded everyone is. I’ve gone to parties where there are so many different types of people — you could be wearing an orange wig with make-up on or come as a cross-dresser and no one would even bat an eye. Then I go dye my hair a different color and head out on the ‘QS and people think I’ve lost my mind.” 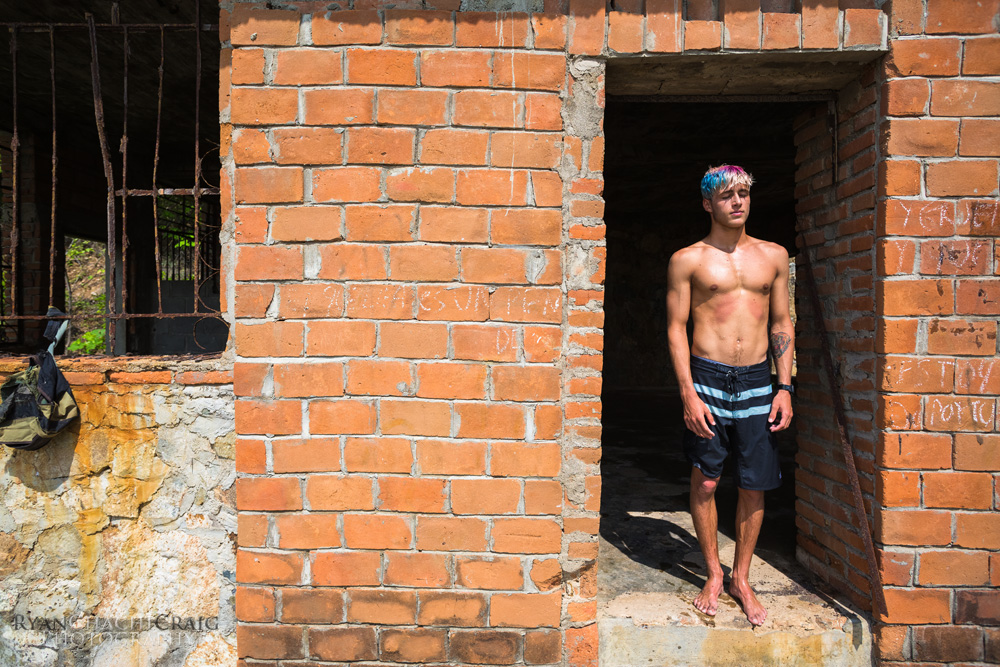 “The nice thing about LA is there are tons of different types of people doing cool shit,” says Davis. “Whatever it is, art, music or anything — someone is always doing something creative. I also love how open-minded everyone is.” Photo: Ryan Craig

But surviving in the throngs of the Concrete Jungle takes its toll. Especially, in today’s age of social media. Davis — who boasts an Instagram following of 100,000, most of which are teenage girls — endured a rather public breakup with longtime girlfriend/model Cailin Russo.

“People only know how much you give them,” Davis laments. “I still get too connected to [Cailin] and we haven’t been dating for a year now. It’s a nightmare. People think they know what I’m doing but I’m pretty amped on staying under the radar these days, especially when it comes to dating someone who has a high profile.”

That said, @lukedavisthegrey is renowned throughout the surf world for posting an abundance of selfies. And believe it or not, he does read all of his comments. He loves his fans.

“People ask me if taking pictures with my fans gets annoying and I’m like ‘no way, this is awesome,’” says Davis. “Without them, you’re working at Starbucks.”

And despite murmurs of a modeling career outside surfing, Davis contests the only studio shoots he does are for his sponsors…and maybe messing around with a few of his LA photog buddies. But, still, scroll around on his Instagram feed and that seems hard to believe…I mean, we have seen him naked. Either way, those blue-steel posts still draw a bounty of haters. And lovers. Because let’s face it…the dude’s the closest thing we have to a teen icon. 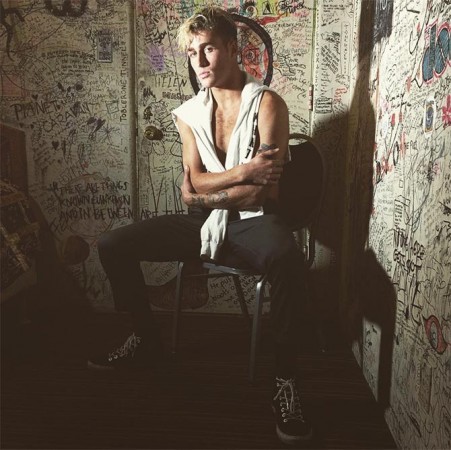 “The response to that video is a prime example of how narrow-minded the surf industry is,” Davis contends. “Coco Ho surfs naked. Kelly runs through the park naked. Laird stand-up paddles with his wife on his board naked…But Luke Davis lays on the ground naked and people react very differently. Maybe it was the pink hair? People talk shit, and I just laugh. I do kinda bring it upon myself, though, because I do abnormal things compared to the rest of the surf world. It doesn’t matter what they say at the end of the day as long as you make yourself happy. I want to do whatever I want as long as it makes me happy and I’m having fun doing it.”

Throughout his metamorphosis, Davis admits his goals in surfing have always been the same. After all, Instagram didn’t exist 10 years ago.

“Ten years from now,” he ponders, “I hope I’m still getting barreled and doing what I love every day. But I’d rather live in my car than stress about money. Hell, by then I might be living in a camper posted up at [San Clemente] State Park pulling into closeouts. But as long as I’m getting barreled with my good friends, I’ll be happy.”

But for now, with brands attempting to homogenize the image and lifestyle of surfing for the whole world to see, punks and purists can rest easy knowing that someone like Luke Davis evolved from our culture. If only to keep things interesting…Actually, colorful might be the better word. 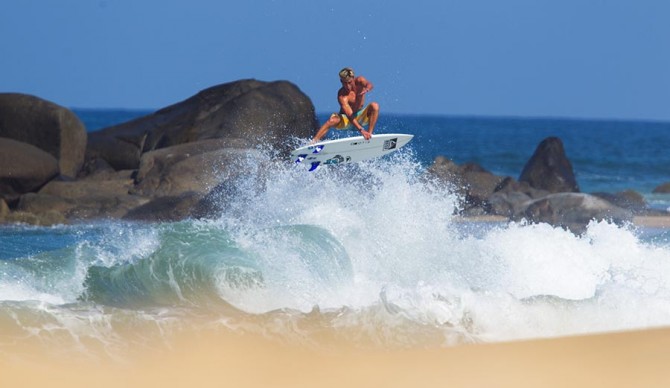