Where in the World Is Alex Gray? 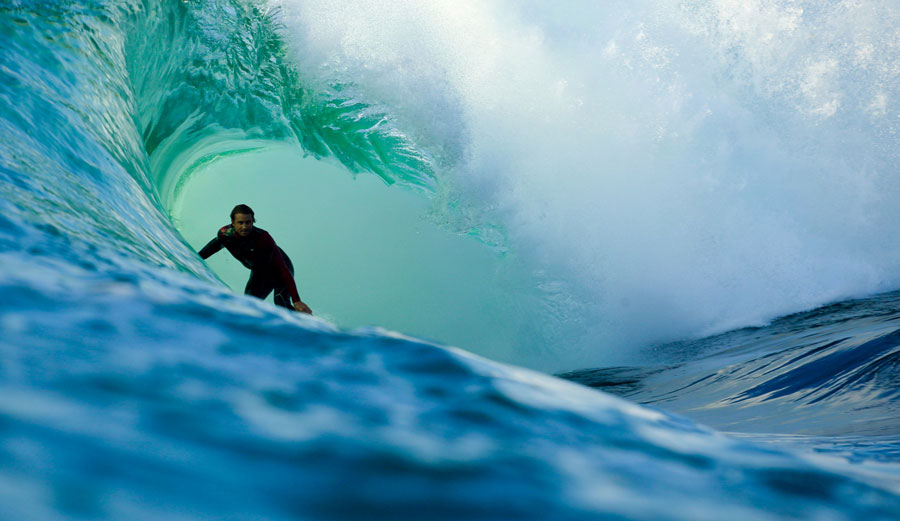 He’s probably on the road somewhere, hunting down mysto tubes like this gem.

Alex Gray is running around town like a madman. He’s picking up wetsuits at Body Glove HQ before leaving in the morning to chase a rogue swell in Ireland. He’s jetlagged, too, having just returned home from surfing a tidal bore in China. Tonight he’ll speak at a city council meeting to advocate a skatepark in his hometown of Rancho Palos Verdes. And to top it all off, he just landed the cover of Surfer magazine’s November issue with a postcard perfect Tahitian tube.

“I’m having a kooky ass day right now,” Alex tells me over the phone with his characteristic child-like giggle.

Despite the chaos, Alex is cheery – a beacon of positivity amid the unpredictable life of a free surfer and the demons of his past. But you already know this. You know Mr. Gray as one of surfing’s most eternally stoked characters, the grom stuck in a man-sized body, and the fearless big wave surfer who’ll huck himself over a ledge with a smile on his face.

We convinced Alex to take a moment out of his hectic schedule to talk about Chinese river barrels, hunting wild game, and staying positive. 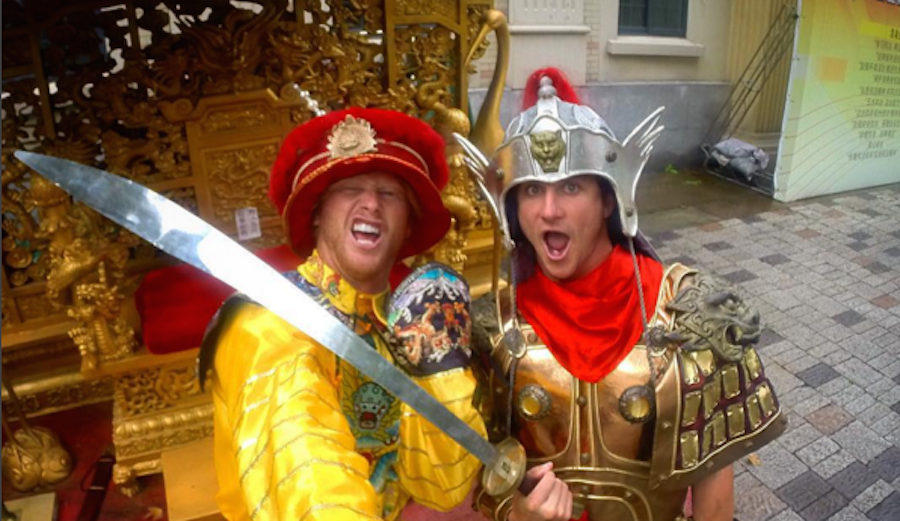 Alex and Cheyne Magnusson adapt to the local culture during their recent stay in China. Photo: @RedTide83

Congrats on snagging the gold medal over in China! When did you get back home?

I got back a few days ago. It was such an experience for Cheyne [Magnusson] and I because we had never done it before. The other teams had done it. So we were the underdogs in a sense.

And Cheyne got a 10! He did like 12 off-the-lip turns. Totally looked like he was riding a wave at Lower Trestles. Just bottom-turning then straight into the lip. I was screaming on the jet ski just like five feet away. Then after he was all, ‘how was that?’ And I was like, ‘dude, I don’t think I’ve ever been more proud of you!’ It was something that I miss in surfing…that team aspect. A lot of surfing is so individual. But I got to share with my really good friend one of the most unique experiences that is in surfing.

People have died from this thing…was it scary out there?

Well, you can understand why people die. The river runs through the middle of a city. And the Chinese culture is fishing, so you’ve got a lot of people out there on the river. If there was a day that you didn’t check the tide chart or know that that thing was coming in…it literally comes up and over the side wall and into the streets. You can get taken out.

You haven’t been much of a competitive surfer in a long time, so was it weird for you to put on a jersey?

I was laughing from the moment it started. Within the first five minutes, I watched Cheyne get mowed down by the tidal bore. He fell off, broke his fin…he was freaking out. I felt like the roles were reversed. Cheyne was super focused and competitive. And I was just like, ‘yeah, bro! The tidal bore!’ The majority of the time I was out there I was just laughing…and mostly at Cheyne.

But these days when I put a jersey on, I do my best to keep an open mind. When I used to do the QS, I had tunnel vision. I really wanted to win. That’s what I wanted from surfing. But now I’m so open to the experience. This contest was a chance to do something that few people get to do. I was honestly just grateful to be a part of it.

That being said, once I was dropped into a wave, I was like, ‘Oh, it’s on baby!’ I think that your competitive side stays in your blood no matter what. In the Big Wave Tour events, I revert back to QS mode. I’m like, ‘Oh, you’re gonna go sit deep? Well I’m gonna sit deeper.’

I heard you even got barreled out there? WHAT!?

Yeah, I got tubed! I don’t think it was a groundbreaking tube or anything. So Cheyne and I came over this wave and I just see these three waves simultaneously barreling. We didn’t have priority but Cheyne was like, ‘Are you ready!?’ I jumped off, gathered my feet, and then pulled up into it. It kinda closed out but I punched through the lip. I looked over and the judges all had their hands in the air. I didn’t realize it but nobody had ever gotten barreled before in the contest. So Cheyne had just got a 10 and then he dropped me into a barrel. And we really had no idea what we were doing because we had never done it before. 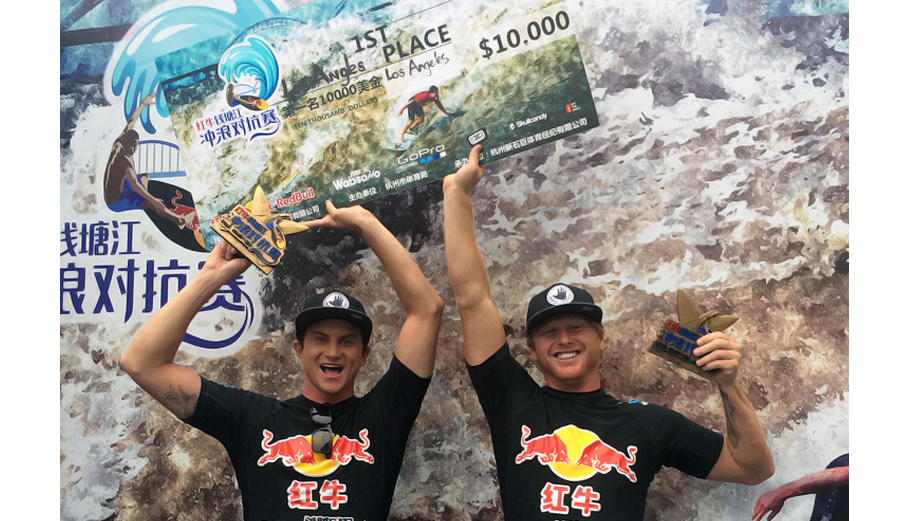 Are you and Cheyne gonna go back and defend your title?

Oh, 100 percent. I was blown away by the magnitude of the wave. It’s one of those things where video and pictures don’t do it justice. Afterwards you feel like you went toe-to-toe with Mother Nature. And Cheyne and I won $5k a piece for having one of the best days of our lives. But in the end, everyone wins. Everyone was pumped.

Moving on from tidal bores to wild boars… What about hunting? How’d you get into that?

I was introduced to hunting from [Dave] Wassel and [Shane] Dorian. For me, it was just a way to hang out with my heroes. And then I became addicted to it. But out of my group of friends, I’m by far the biggest amateur and rookie…still to this day. The best thing about it is being in nature, sharing an experience with my friends and no one else around. That’s what I enjoy about it… And also I eat meat. When you can eat something that you killed yourself, it just feels right.

What’s going on with that skatepark?

I’m going to a city council meeting about that tonight. Rancho Palos Verdes has never had a skatepark and for the last five years, everyone has really been pushing to get one. But they kept getting denied. So about two years ago, I jumped on board and started going to meetings. And for the first time ever, they approved it. I learned a lot about public speaking and politics…like real world stuff, which I enjoyed a lot. It’s all about giving young kids courage to stand up for what they believe in. That’s an invaluable lesson.

Any future in politics for Alex Gray?

Maybe! I believe in standing up for what I believe in and if that involves city council, then I’m all for it. When it comes to your hometown, it’s so important to be involved. We always have to remember where we came from. Growing up where I did, that was my platform for success in my life. I feel the need to give back to what gave me so much. 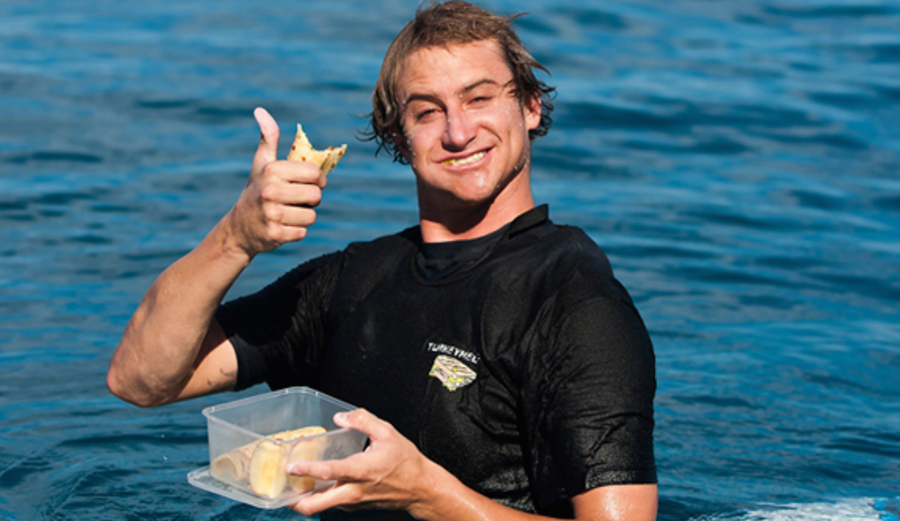 Alex Gray, never not smiling as he grabs a bite to eat mid-session. Photo: Tom Servais

You’re one of the happiest humans out there, yet you’ve had a few rough patches in your life. How do you maintain that positivity?

The easiest way to keep myself in-check is remembering the 10-year-old me that rode his first wave at an L.A. beachbreak close-out for one second. I didn’t know it, but my life changed forever. As a kid, my brother and I had so many aspirations and dreams of professional surfing… I never thought I’d be where I’m at today, but I’ll never forget where I started.

There are a lot of things going on in the world and I feel like I’m a pretty lucky human. But with that comes hard work and dedication and sacrifice.