Why Do Some Waves Just Seem to Get Under Your Skin (and Stay There)? 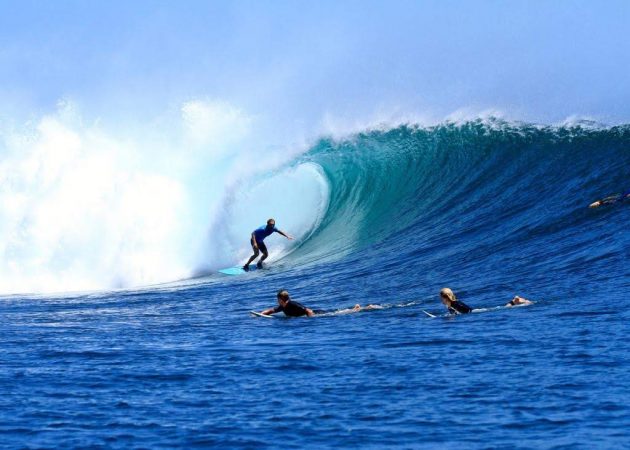 The author on a meaty one. Absolutely worth the ensuing beating. Photo: Trevor Bradford

There are certain places on this planet that get under your skin. They grab a hold of your soul like a barnacle that refuses to be scraped off the hull of your existence. By leaving some of my own skin on the reef at G-Land, the world-class wave returned the favor by leaving some of its own soul under my skin.

It doesn’t matter how long the rest of my life may be. Until the day I die, I’ll remember the time I spent in the jungle on Java as if it were yesterday. The whole experience flows together as if it were one giant wave; one you wish you never had to kick out from.

These places are different for every surfer. Each participant in the great oceanic dance has his or her own milestones in their individual history of surf experiences. For some it may be a beat down in mainland Mex. Others might find it deep in the tube in Fiji. For me, I’m happy that G-Land has become a part of my surf tapestry. It is truly a survival experience here. One does not come here looking for a cushy vacation or an easy way out.

The camp is a cross between living a chapter out of Lord of the Flies and an episode of Survivor. Here, people are voted off the island via injury or simply giving up on the rawness of the experience. The boat comes every three days and removes the beaten, replacing them with the fresh and yet-to-be broken. One is always hungry, both for waves (which come in excess) and food (which always seems to be in short supply).

But still, the very idea of living in a surf camp with many of the modern conveniences (such as electricity) in such a rugged and raw place is in itself a contradiction to the jungle’s very essence. It makes me wonder how the first surfers in this wild place saw it all with their untarnished eyes.

Tim was one of the old-schoolers who used to live in a tent out on the point when the surf camps were still in their infancy. He now stays at the camp on the regular when he visits from California. He has been surfing here off and on for over 30 years now. One day, when watching the waves together, I said, “I’m still trying to figure out where all these breaks begin and end.”

He looked deeply at the ocean from behind his sunglasses before responding.

I guess one never finds out the whole story of a particular wave. They only receive what the ocean gives. In time, one may think they have it all figured out, but all it takes is a couple of bombs on the head and a brutal hold down to put it all back into perspective.