Why I Get More Waves Than You 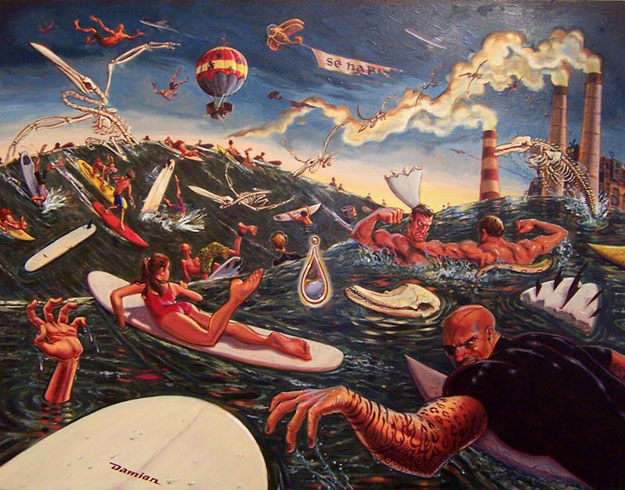 Are you part of the kicking, biting, clawing faceless horde? Art: Damian Fulton.com

I don’t have a home break. I move around a lot and fit my surfing in when and where I can.  As such, I’ve never been entrusted with the sacred responsibilities of localdom – telling people I don’t recognize them or to “go back to where they came from,” or taking myself too seriously, making threatening remarks on bb’s, etc.  I’ve also never gotten to enjoy the sense of camaraderie that it entails.  No one asks how my family is doing, or calls me into waves just because they like seeing the boyish smile on my face.  No sir, regardless of where in the world I’m surfing, I am one of the faceless horde; kicking, biting, clawing and paddling over each other for every single scrap of a wave that filters past the more established members of the surfing hierarchy.

Sixteen years of this have made me an exquisite hassler.  In fact, and I’m not trying to brag here, I might be the best hassler in the world. But recently, I realized that wasn’t enough. I had just moved to Australia and found that the southlanders weren’t going to roll over for the odd fake-left-go-right, or take-off-under-the-white-water trick.  I had to bring the ruckus.  So I came up with a list of tricks that are all designed to exploit my fellow surfers’ insecurities and all but ensure I get the best of the non-set waves.  So without further ado, I give you the succinct list of why I get more waves than you.

Stickers
I sticker my board, because I know you’re looking. I make sure to put them on the money spots too – nose and upper-right-hand rail – because that’s where the photogs focus.  That is, if there were photogs taking pictures of me, which there aren’t.  But you don’t know that. I use the largest and least recognizable stickers I can find because should someone actually witness me riding a wave, they’d know better. I’ll never convince them I ride for Quiksilver, O’Neill, or even Analog, but “Nacho Ortiz’s Siding and Vinyl repair?” Tal vez.

Pink Zinc
I don’t want to overplay the “pro” angle, so I tweak it a bit with something that no self-respecting surfer would wear – pink zinc. Shortly after moving to Oz, I noticed that a lot of the guys were wearing skin colored zinc, which had the unfortunate effect of making them look more like sea-going clowns.  I took the opposite tack and went with fluorescent pink, because it throws off the competition: no one knows exactly how to react to a clown.  Plus, the look is borderline pedophilic. I call it the best of both worlds. If you’re going to wear pink zinc, it also helps to practice your pedo-smile.  I knew a guy in New York with such a ridiculous pedo-smile, he could clear a peak just by flashing his teeth.  It also helped that he had one of those haircuts with the side burns shaved off to above the ears.

Whistling
The lineup is a place of grim, stoic contemplation, like a Catholic church. It can also be as quiet as a morgue, and if there is one thing morgue/churchgoers can’t stand, it’s a whistler. So I pick a tune and shrill away, sticking with contemporary pop hits like “Firework” by Katy Perry or anything from the extended catalog of Lady Gaga (who, apparently is a surfer now).  But occasionally I like to fall back on old favorites like “No Scrubs” by TLC and “Take Me Home Tonight,” by Eddie Money.

Excitement
I don’t mean “stoked,” which is a kind of knowing, measured excitement. I mean bubbly.  I hoot for perfect strangers, throw my hands above my head when I’m watching from the shoulder, offer a high five to a random person riding a two-foot wave, or even better, offer a high five to a random person while I’m riding a two-foot wave. This is actually a trick that I learned from an old Hawai’ian guy in Wrightsville Beach, North Carolina.  When people drop in on him, he actually hoots for them instead of getting angry. When they both kick out, he compliments the offender on his awesome wave. The average surfer finds this behavior so counter intuitive that it is not uncommon to see them paddling to shore and driving home in self-disgust.

Free Willy
Now that I have people questioning both my ability and my sanity, I paddle like a pod of breaching orcas. When I want a wave, I want people to know that the crazy guy with the neon face and the Megan’s Law smile who’s been whistling “Fucking Perfect” by Pink wants a wave.  Something about the intensity of a ferocious paddle intimidates many surfers.  I might be the worst surfer in the lineup, often am in fact, but the second I drop my head and displace a lot of water, people believe I mean business.  This tactic has gotten me waves from Long Beach, New York to the Super Bank in Australia.  In fact, the only time it doesn’t work is when there are pros in the lineup, because they actually paddle as hard as it sounds like I paddle.

Claim it Like You Stole It
When I actually ride a wave, regardless of how good it is, I claim it. The majority of WASP (ie surfing culture) is based on a deep sense of humbleness and/or shame.  To show joy over one’s own accomplishments is anathema to such people. That’s why they hate Brazilians.  That and the style thing.  Nothing confuses, enrages, and intimidates fellow surfers more than claiming the hell out of every wave you are still riding when it fizzles out.  And I don’t mean a little fist pump, either.  I mean born again Christian singing “This Little Light of Mine” with 7,000 of his brothers and sisters at the World Harvest Church.  When I claim, I look like James Brown on a speedball, and you should too.

Regardless of your actual surfing ability, if you follow these simple steps, you will have 95 percent of the lineup believing that you are a hard-charging, reckless, sociopath who makes all of his drops, never misses a wave and might not be allowed to come within five city blocks of an elementary school.  I don’t know about you, but I’m reasonably certain that’s about as close as it gets to being a true local.