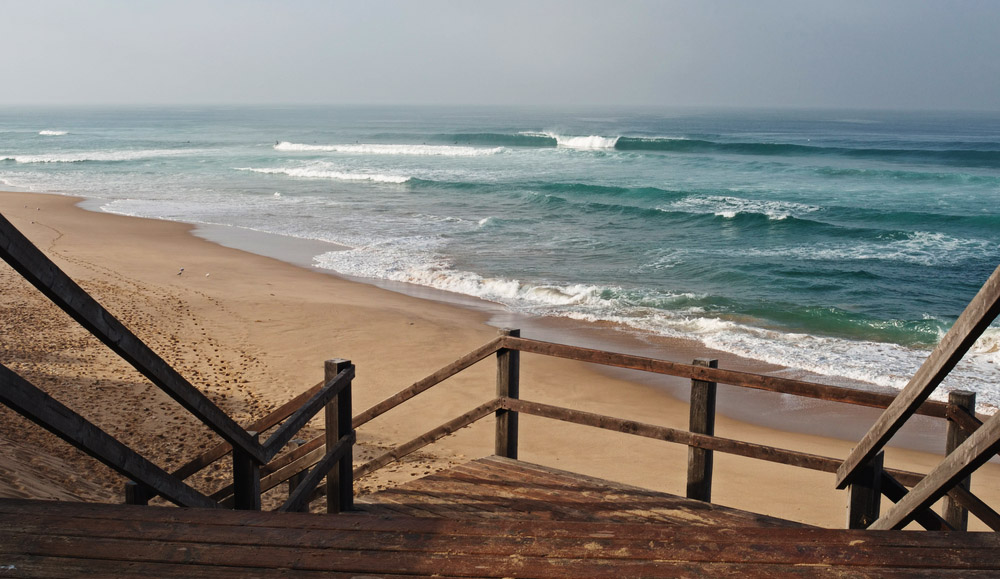 Not my spot, but another in a long line of beautiful waves with hard-to-use stairs down to them! Photo: Shutterstock

Even though it’s not that great a spot, and even though it ain’t that much of a secret, I’ll refrain from naming it. I’ll just call it Clownfarts for the purposes of this. Clownfarts is my favorite spot in LA. It’s fickle, and the wave is far from perfect. But on a meaty south swell it can really turn on and hold a lot of size. It’s one of those waves with a great rack and impeccable manners that you can take home to mom and dad. Since it’s so fickle and close to other popular spots, it has long been overlooked. Mainly because it was mildly inconvenient to access–you had to climb down a couple ofrocks and tell Gary Busey a knock knock joke or enter from a small, bougainvillea-laden beach access a ways up the beach. But that era is over. They just built a humungous public beach access stairwell right in front of Clownfarts with giant blinking “surf here” signs.  Here are 5 reasons why I am just head-over-heels in love with the fact that this just happened.

1) Now I will save tons of money on groceries.

Catching just about any wave I wanted there was really getting old, and expensive. It burned up way too many calories and my grocery bill would frequently skyrocket out of control. Too many times to count I’d paddle back to the peak after a nice long ride and it would be time for another set, and with more waves than people, I’d have to go. Ugh. Nothing worse. Now that it’ll look like Topangry out at Clownfarts, I don’t have to burn my precious calories paddling and surfing. I can finally just sit on my board and scowl like everyone one else in LA, packing on a paunch to stay warm in a 3/2.

Unfortunately I’ve had to surf Clownfarts alone or with only a handful of people out pretty frequently. I don’t like being lonely, especially when I’m having fun. Joy shared is double joy. Now that there is a giant staircase down to the beach I can surf with hordes of other super friendly, real, and mindful LA people. We can make memories and forge long-lasting friendships based on mutual respect for one another, bonding over our beloved, shared pastime. You know, like what happens at all the other breaks in Southern California.

3) More stand up paddlers can finally surf Clownfarts now. It was already a popular spot for local SUP surfers, but now all the non-local SUP all-stars can pull up in their completely necessary and in no way compensating Ford f-150 Raptors and easily carry their gigantic gear down the stair case. As I’ve previously written, I love SUP surfers, and we should all be so lucky to surf with entire lineups of them. Now at Clownfarts, we can!

4) I hate peace and quiet. Surfing is often a very calming, quiet endeavor. At Clownfarts, my mind would often get a chance to think thoughts. It’s scary having to face our inner demons and brain chatter.  Now I won’t have to do that at all since the Wavestorm bandits from Sunset can congregate at Clownfarts and talk in very tasteful outdoor voices, giving me something interesting to listen to. Whew.

5) I have started sleeping much better now that I no longer have to shoulder this unbearable guilt. Being able to surf relatively empty waves made me feel very selfish, so I’ve been carrying around an enormous burden of guilt and haven’t slept a wink in years. It’s amazing what a little shut eye can do to your mood and perspective.

I’m very excited to see every single one of you out there on the next south swell!