Why Is Surfing So Good for Us? A Neuroscientist and a Writer Offer Clues 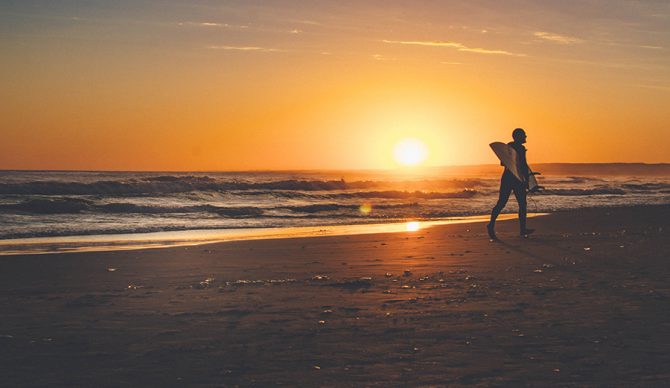 Maybe it’s simply moments like this that make us happy? Photo: Paz Arando//Unsplash

Sappy, soppy, mystical explanations and platitudes abound for describing surfing’s transcendental health benefits. But trite spirituality aside, what does surfing offer that pumping iron or riding a treadmill can’t? I took a harder look at the question and even asked a neuroscientist to see if research might offer any clues.

Is it the exposure to the elements in lieu of the sterile, fluorescent-lit chambers of sweat crossed with body spray and rusty iron? Maybe it’s the adrenaline rush that only occurs occasionally in the gym when you attempt to bench too much? Or if the steroid-addled mongoloid next to you doesn’t like the way you’re looking at them? There are certainly close brushes with death when running off-trail or blazing down a cliff’s edge on a mountain bike.

Or is it the satisfaction of improvisational decision-making? Something you can find in surfing, skateboarding, jazz music, or a blank canvas, but only vaguely offered by weight-lifting, running, cycling, or any activity with steadfast rules.

Anyone who’s ever gotten their heart rate up, or surfed, knows that the benefits of physical activity on mental health are many. However, the stimulation we experience in pursuit of activities with few or no bounds might be mediated by something called synaptic plasticity, says Santi Solé Domenech, a Weill Cornell Medical College Research Associate and Google Scholar specializing in biochemistry and neuroscience.

A synapse, neurologically speaking, connects neurons in the brain to those in the rest of the body, including sensory organs that register touch and pain. Over time, and through use and disuse, the power of synapses changes, strengthening or weakening, which, in theory, plays into our fundamental abilities of memory and learning.

In heightened states of emotion, pain, or general strain, synapses are firing away. While there may be similar activities that bear similar effects, how many could generate the same responses we have to bobbing up and down in a frothing sea, dressed like shark bait, and trying to hold a position so as to catch a wave in the right place – all while doing our best not to end up as mince meat on near-dry reef below, or barnacle-encrusted boulders ashore?

Then there are the moments when everything comes together. When you’re finally where you want to be, and the wave is a blank canvas, a 12-tone scale with every pitch in between, and when friction and gravity — and maybe a little wind chop or a crowded inside section — are the only things really holding you back.

These are not the sensations most of us encounter in the midst of, say, repetitiously transferring hunks of iron from one position to the next, or placing one foot in front of the other on a treadmill or nondescript gravel pathway meandering through a city park. Not to cheapen any of these sports or exercises; they all hold different merits and offer different forms of respite for everyone.

Consider, on what is perhaps the dead-opposite end of the spectrum of surfing for many people, staying seated and trying to hold your eyelids open during a calculus lesson as opposed to taking on a triple-overhead slab with nothing but a measly foot or so of water between you, imminent death or facial reconfiguration. It’s the sheer stuff of memory that only results from being spat out of a perfectly heaving stand-up barrel.

Mountain biking and road biking are certainly thrilling and riveting in almost every regard. But there’s something about being on terra firma, our natural element, however cold and hard it may be. In short, we’re plainly and simply out of our element the second we’re afloat.

Sure, the mammalian, or diving reflex kicks in and more or less keeps us from drowning (immediately, at least), but deep down and instinctually, we all know we’re fighting for every breath and every wide-open face in an environment wholly not our own, an existential conundrum and a chance at a different perspective.

Be it a three-wave hold-down or the ten-second dredger we’ll dream of through our last gasp of air within our earthly wares, we’re seeking and invariably finding relief from the doldrums of day-in, day-out life ashore. It’s something no weightlifting gym, no pre-worn path, and no four-walled institution can ever give us.