Shark Deterrent Companies Have It All Wrong 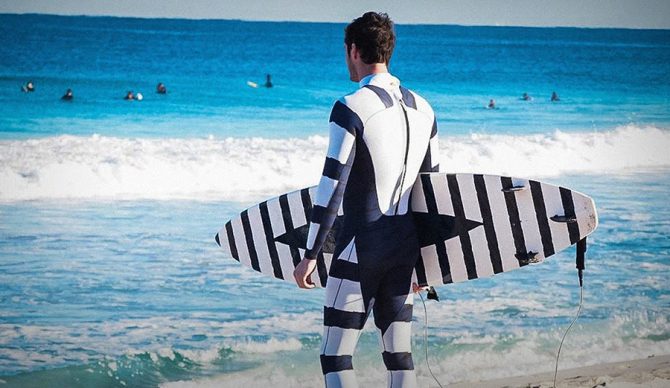 This author thinks the brilliant minds working on shark deterrents could use their energy elsewhere. Photo: Screenshot/Ted

Sharks are not a threat to humans. Do shark attacks happen? Of course – there were 73 unprovoked shark attacks in 2021, nine of which were fatal. However, considering how many millions of people frolic in the ocean’s warm summer waters, these seem like safe odds. More people die each year from goose-related incidents than shark attacks. That last sentence is completely false – but you 100 percent believed it because geese are notorious assholes. If sharks possessed even a quarter of the vicious anger geese have, Sharknado would be a documentary, not a cheesy Sci-Fi film.

My point here is attacks are rare and sharks are not a problem. Accidents happen – pianos fall on people, bears steal your picnic basket, and sharks on the rare occasion get pissed you’re using their home as a bathtub.

But that has not stopped a handful of shark deterrent companies from cropping up, aiming to take your money in exchange for feeling safer in the ocean. The tech itself is suspect – despite lots of scientific research and the backing of the Aussie government – and feels a little snake oily. There are anklets with powerful magnets, tail pad devices that create an electronic “Shark Shield” around you, and you can even cosplay as the Fruit Stripe Zebra to confuse the shark. You would think if these things really worked, all of Florida would have adopted them by now. Also, if all we’ve learned from this extensive research is that sharks are disturbed at the sight of a zebra, then let’s just say I have my doubts.

Regardless, these companies have provided a murky solution to a statistically minor problem in the surfing community, feasting on more paranoia than fact.

But they could do something groundbreaking.

All the components already exist and their ideas are in the right place, but focused on the wrong species. They could use their current resources and tech towards something the surfing community truly needs – surfer repellent.

Many breaks are now clogged with wave riders both angry and oblivious, resulting in no shortage of rage-inducing events. This is nothing new really, there are just more people in the water now thanks to the Covid Surf Boom of 2020. But what better way to fix that problem than by creating a scientifically proven way to safely repel all other surfers in your general vicinity?

I would never buy shark deterrent. But a surfer deterrent? Hell yeah. My wallet is WIDE OPEN. Take all my money. I don’t care how much it costs or how stupid I look – you could dress me up like a kangaroo going to a quinceañera if it meant no one would surf near me. I would also buy multiple anti-surfer anklets and cover each calf with them. No surfer would be able to touch me – literally, because of either my gigantic magnetic barrier or excessively large frilly dress. I would go into massive amounts of debt AND look incredibly dumb if it meant this bouncy princess was guaranteed waves all to himself.

I’ve already taken out a loan in anticipation of this idea becoming a reality. Not because I want to invest in this fictitious business – but because I want to buy all of their product for my own personal use to dominate whatever Southern California wave I please. Lower Trestles all to myself? DON’T MIND IF I DO, SUCKERS.

Why is this not already a thing? It’s so lucrative. It’s so revolutionary. It’s the perfect solution to a modern-day problem. Call it something aggressively dumb like SURFER SHIELD and make a gazillion dollars. I would never take it off.

But then my leg would definitely get chewed off by a shark because I would be the only one left in the ocean. Karma, man.

Editor’s Note: Jason Nauman, a San Diego-based scribe, explores the lighter side of surf culture for The Inertia.