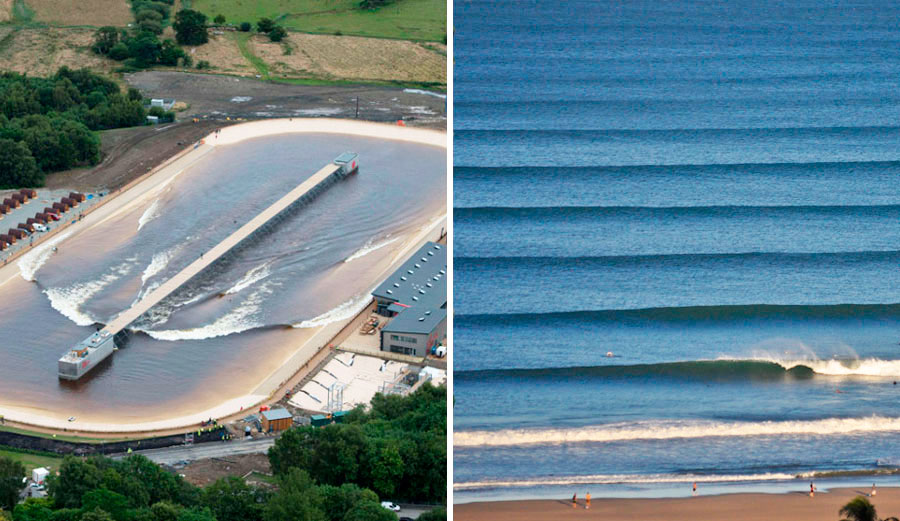 Love them both, and tell everyone about the one on the left. Photos: (L)Surf Snowdonia (R) Kristen Brown

Wavepools are, without a doubt, the biggest invention in surfing since the surfboard. No longer are surfers stuck to the coastline–waves are officially a commodity now. And so many people hate it!

One of the chief complaints from the haters is that it has no soul; that the vagaries of the ocean are what makes surfing so grand. And they’re right. Mother Nature’s fickle moodiness is a huge part of it. All those days spent slogging through shitty waves make those rare perfect days just that: perfect. But perfect ain’t perfect if it’s always perfect. We’re a funny bunch; never-satisfied, wave hungry, selfish work-shirkers, we are. But with Kelly Slater and Wave Garden’s literal push into the wave making game, ocean lovers the world over are crying foul.

It’s soulless! they scream. Pay someone to surf?! they ask, spit flying and eyeballs bulging. And I can see where they’re coming from–wave pools, while I’ve never surfed in one, will never measure up to the majesty of that vast playground that exists just beyond the coastline. Many of those folks hate it because it’s seen as a commodification of surfing, which is so horrible because it only puts more surfers in the water–people that don’t appreciate the age-old commitment that becoming a “surfer” takes. It’s the outcast/anarchist mentality–we’re somehow separate from the non-surfing, landlocked lubbers that don’t just don’t–and can’t ever–understand.

Here’s the thing, though: if you hate crowds and competitive surfing in the ocean, you should LOVE Surf Snowdonia and WaveGarden and the Kelly Slater Wave Pool. You should empty your pockets into their stocks. You should scream from the rooftops how fantastic these man made waves are.

Because, if nothing else, wave pools far from the ocean, with their perfectly controllable, judging-friendly, sport-over-soul surfing mentality will separate those that think of surfing as a sport from those that think of it as a lifestyle, thereby clearing your lineups, putting the plug in that influx of middle-Americans flocking to the coast, and creating a whole new surfing dynamic–one that keeps the soul in the ocean and the sport in the wavepools. Tell RedBull how great the event was. Tell the World Surf League to run events in wavepools. Make wavepools the new surfers’ playground.

So tell your landlocked friends how great surfing is. Tell them how this new invention will let them live that much sought after surfer lifestyle. Tell them that they too can feel the greatness of sliding down a wave, and tell them that they don’t have to move thousands of miles and put in thousands of hours to do it. Petition for wavepools all over the world, and far from the coastline. Let’s get one in every town in middle America, in every town in the world, as far from the ocean as possible. The money makers involved will love it. Keep Rick Kane in Arizona. Because it’s only going to help the ones that love the ocean, and love actually surfing.