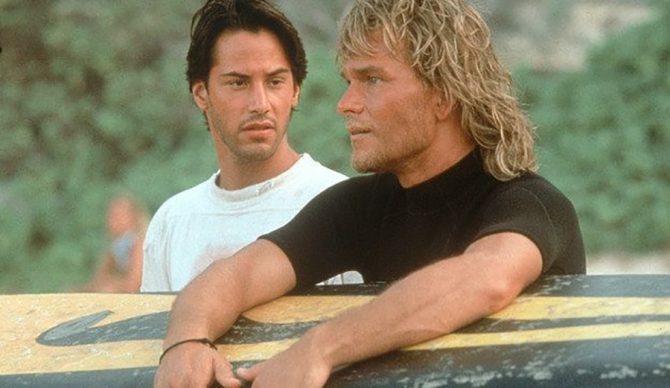 Even Keanu’s Johnny Utah had eyes for Bodhi. Photo: Screenshot

Surf culture struggles with a constant identity crisis: it’s rebellious but corporate; it’s punk rock but reggae; it’s for everyone but it’s only for the chosen few third-generation coastal elites. Surf culture is everything, but also nothing but misguided fools who can’t even properly adhere to their own self-designed etiquette and bylaws. You can take any subject from foam boards to t-shirts and our bunch is guaranteed to misconstrue it in a thousand different ways.

Point Break sits near the top of this pile of misguided adoration. It’s a heralded film in the surf community because it tells the all too relatable story of a kid from Ohio that wants to learn to surf and fight crime. It’s basically 90 minutes of Gary Busey and Lori Petty teaching Keanu Reeves how to become a Ninja Turtle. And it’s awesome.

But it’s Patrick Swayze’s Bodhi that is the soul of the movie. Portrayed as the embodiment of surfing and surf culture, Bodhi talks the spiritual talk and walks the surfing walk. He is a character that we adore for his deep philosophical approach to life, surfing, and going to extremes to avoid getting trapped in the mundane lives most of us wind up leading. Bodhi rules as much as a gun-toting, bank robbing, Ronald Regan impersonator can. Hell, even Keanu spends more time in Poink Break obsessing about, and staring at, Bodhi than actual love interest Lori Petty.

The problem here is that Bodhi has absolutely nothing in common with the real surfer. While he waxes both board and philosophic the way we all would like to in our minds, no surfer actually behaves like this. For as much as surfers want to be seen as thoughtful creatures with a worldview revolving around the ocean, the truth is we only philosophize when we are trying to get laid or while writing about this sport on the internet. Perhaps a world exists where a woman can stroke your back while you babble on about a fictitious 50-year storm and unsuccessfully restring your acoustic guitar, but it’s certainly not the one I’m living in.

A real-life Bodhi would get laughed out of any room. Imagine if some guy came up to you at a party and started talking to you about paying the “ultimate price” and avoiding the concrete rat race before strumming the opening chords of Wonderwall. You would assume this gentleman was high on multiple drugs, a massive doofus, or perhaps both. For all the good that Point Break has going for it, sometimes the Bodhi character feels like it’s lifted straight out of a Corona Light commercial.

However, Swayze is someone the surf world should still idolize, but not for his exploits as the leader of the Ex-Presidents; it’s one of Swayze’s other roles where he truly embodies the spirit of the surfer – James Dalton in Road House.

Dalton possesses the three traits surfers most covet: the ability to regulate a crowd, a haircut that epitomizes the shaggy sexy look, and a devastating roundhouse. Every surfer dreams of telling a troublesome face in the lineup to go surf somewhere else before demolishing the face of a wave and looking totally sweet while doing it. You can Bodhi it up on land with your pals all you like, talking about what surfing means to you and how it’s transformed your life and blah blah blah – but once you’re out in the water, aesthetics and the ability to assert yourself in a crowd are the only things that really matter.

Swayze’s Dalton also understands, crucially, that pain does not hurt. Obliteration and failure are commonplace in surfing, to the point they mean nothing. We watch wipeouts with a sick curiosity because defeat via pulverization is the status quo. In order to withstand the physical and psychological toll that surfing will take on you, pain is something that must be quickly forgotten as it is merely the price of admittance to wave riding.

Dalton was also a damn philosophy major at NYU! He’s properly trained in the art of examining the world around him and has an expensive piece of paper to prove it. He’s not just shouting vaguely about “The System” to his buddies around the bonfire – he actually knows what he’s talking about. James Dalton reduces Bodhi to nothing more than a sexy Gary Busey, ranting about surfing instead of sandwiches.

Surfers live a confusing duality of being mostly just passive-aggressive prima donnas with good balance, while secretly harboring the desire to be tough. We all want to defend our local breaks like they are our own Double Deuce, but never develop anything beyond an overwhelmingly petty stink eye. Sure, Bodhi actually surfs and wants to live life to the fullest, but it’s James Dalton that embodies what every surfer truly aspires to be, but few ever will – a badass.