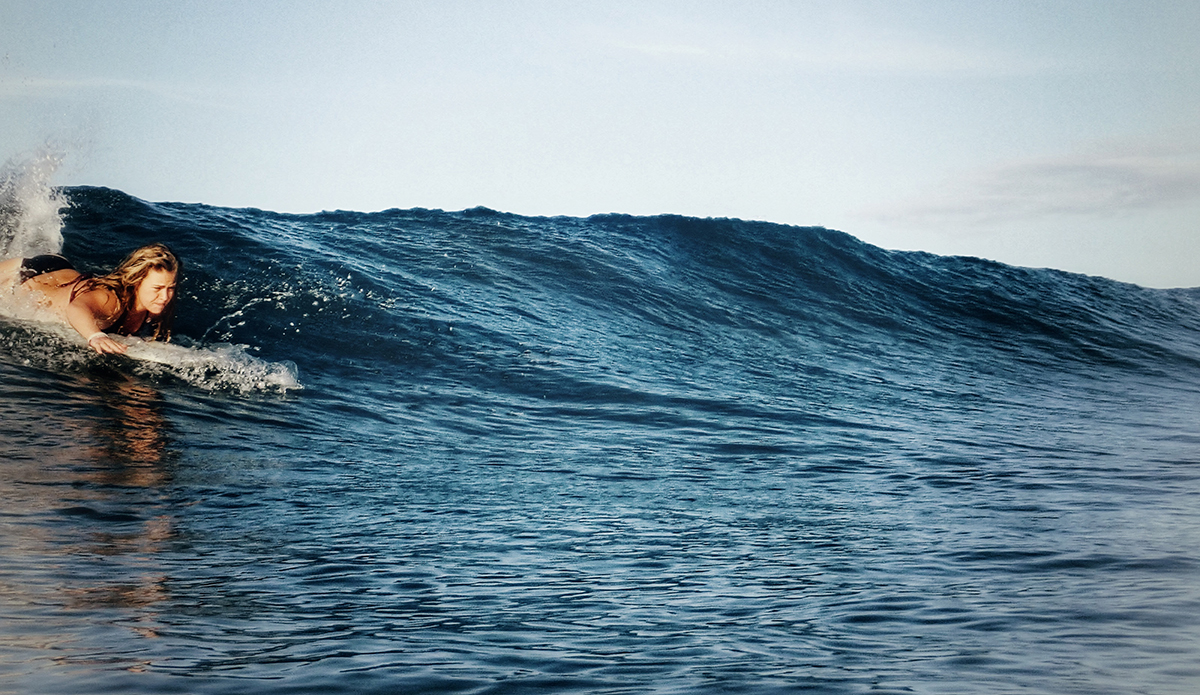 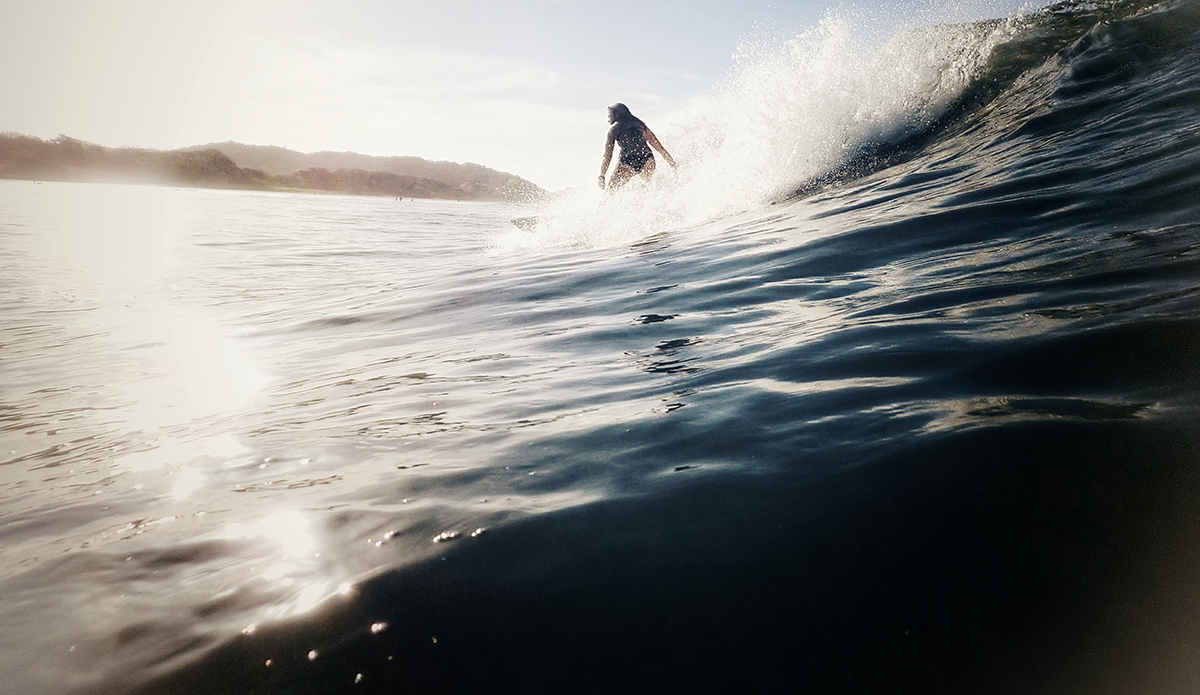 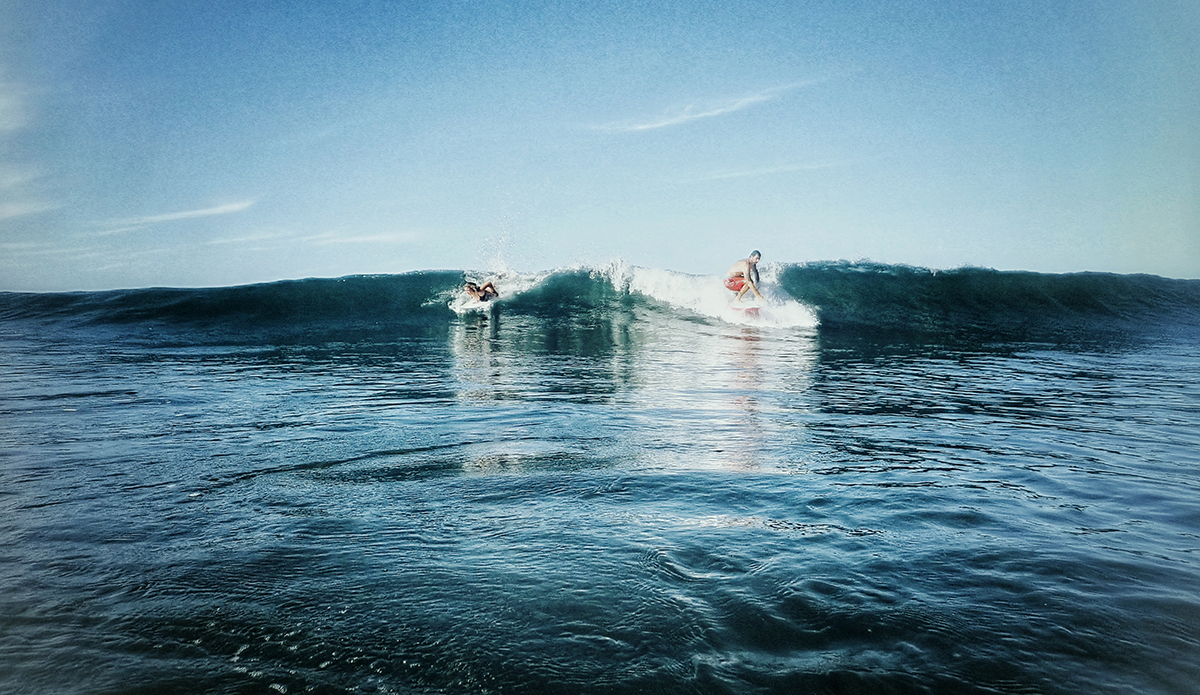 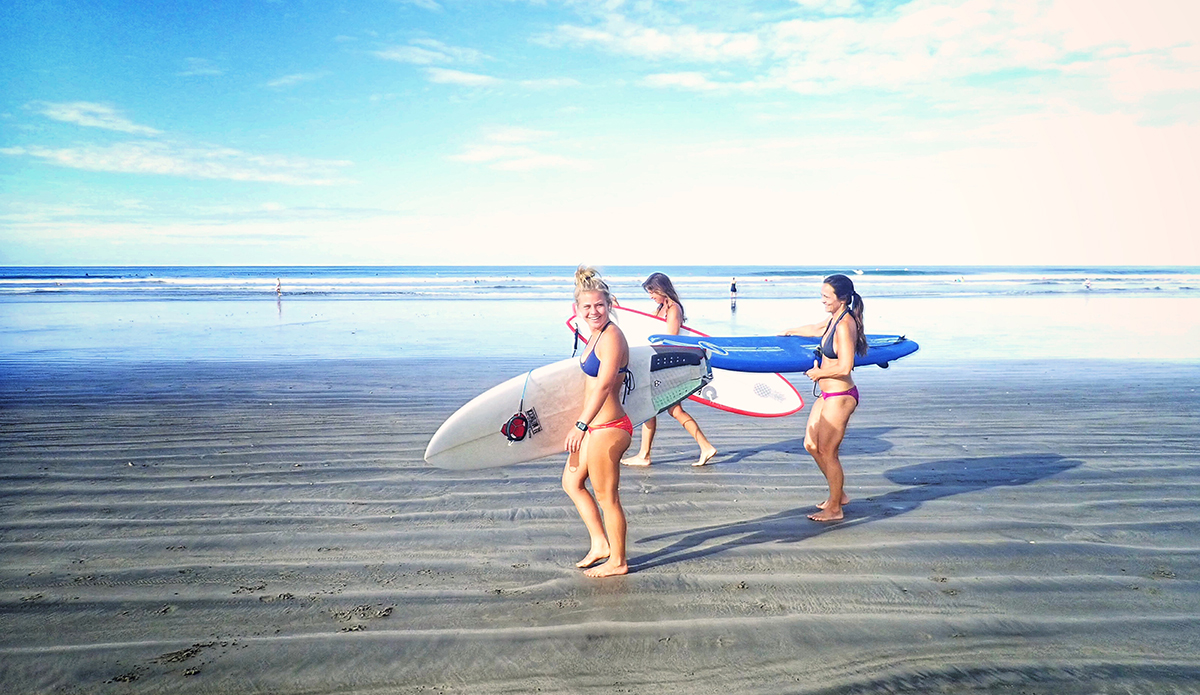 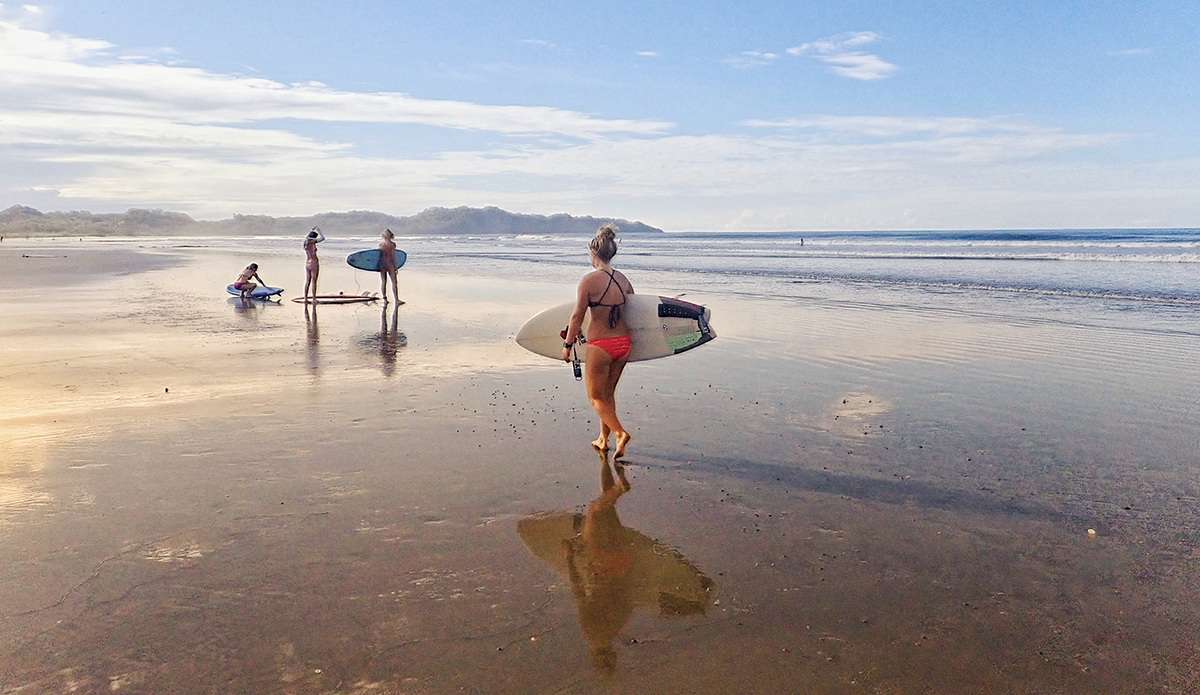 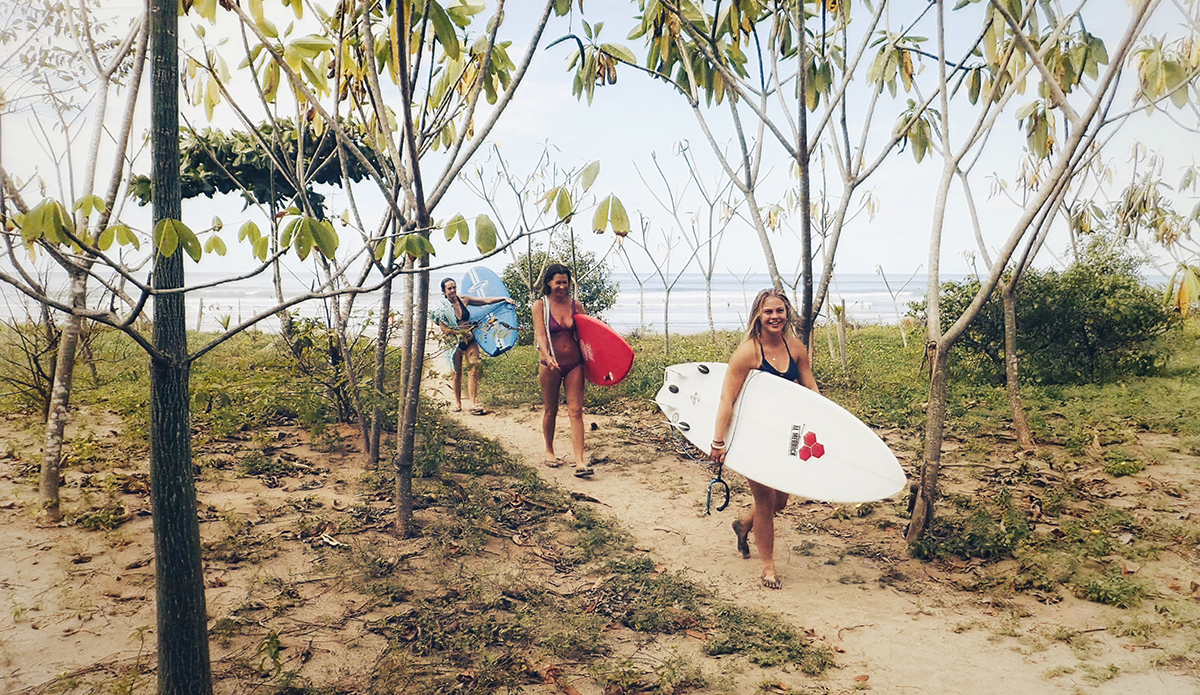 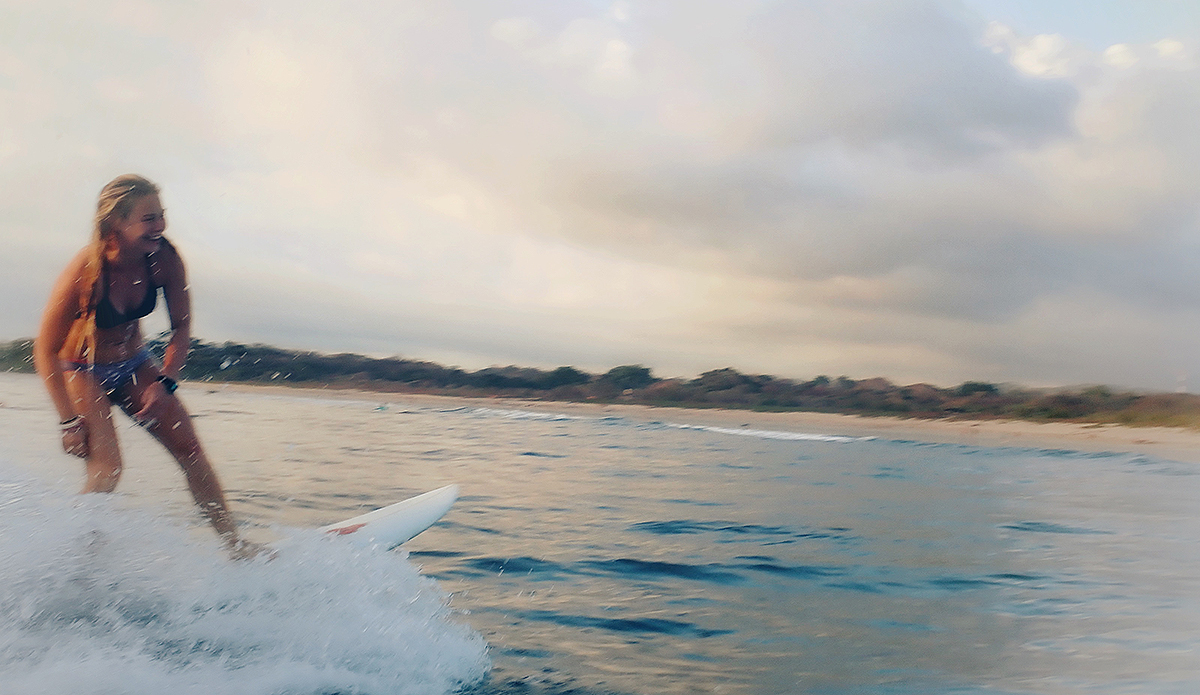 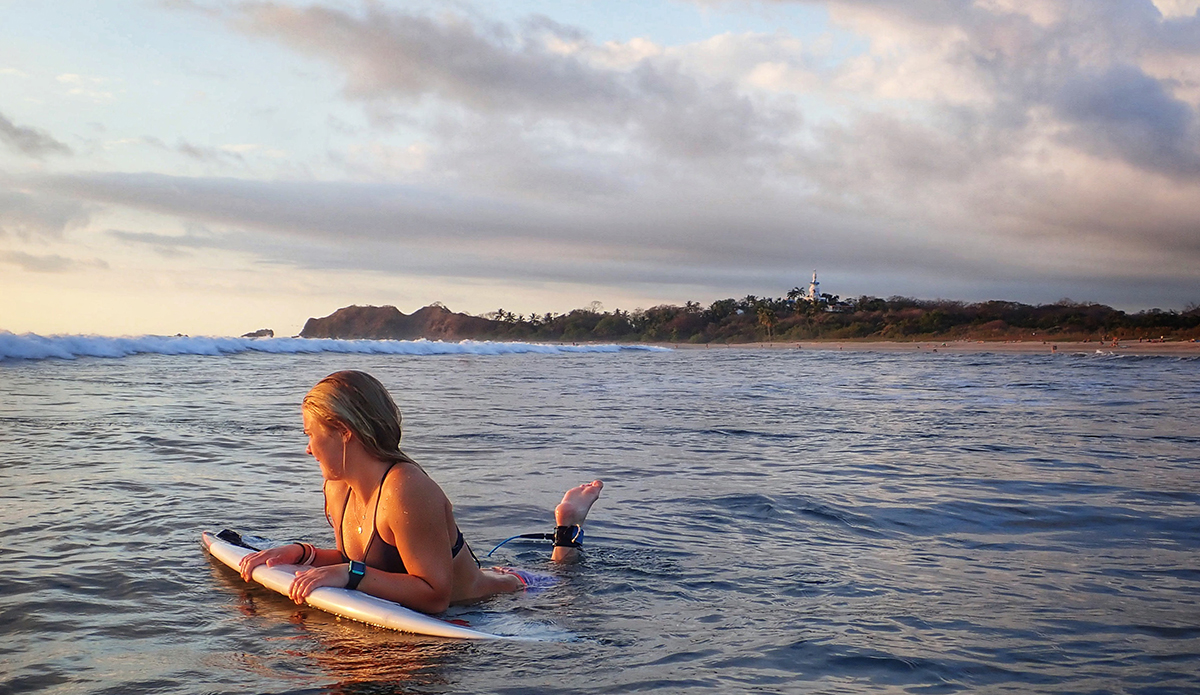 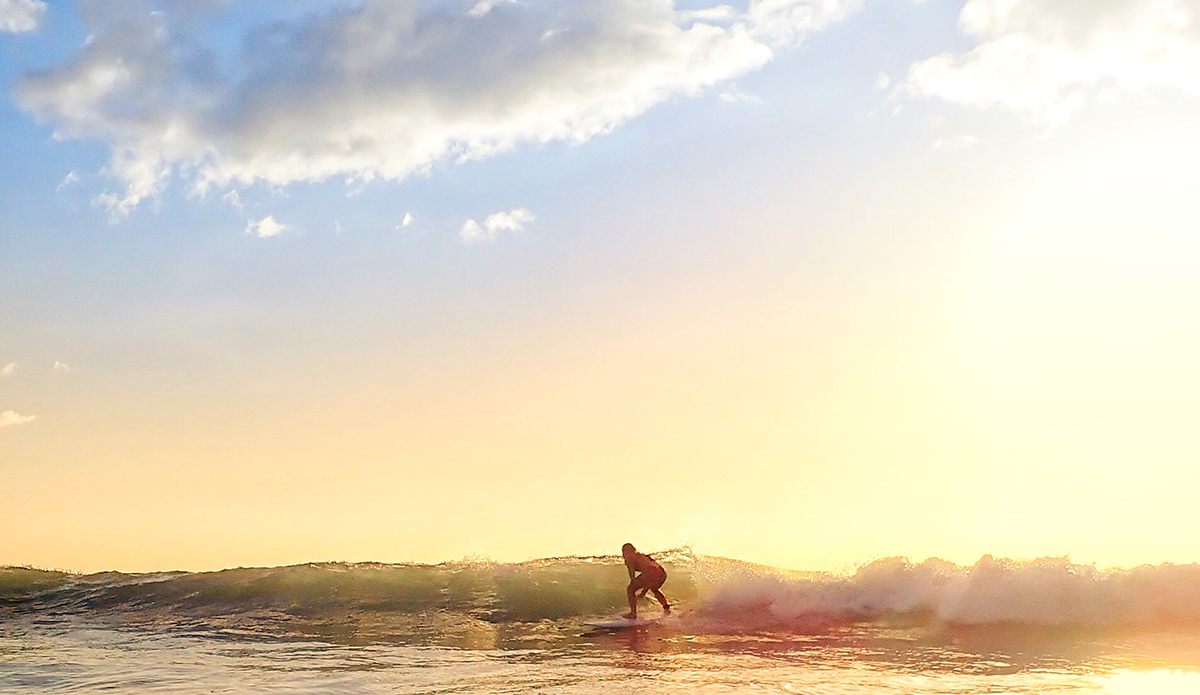 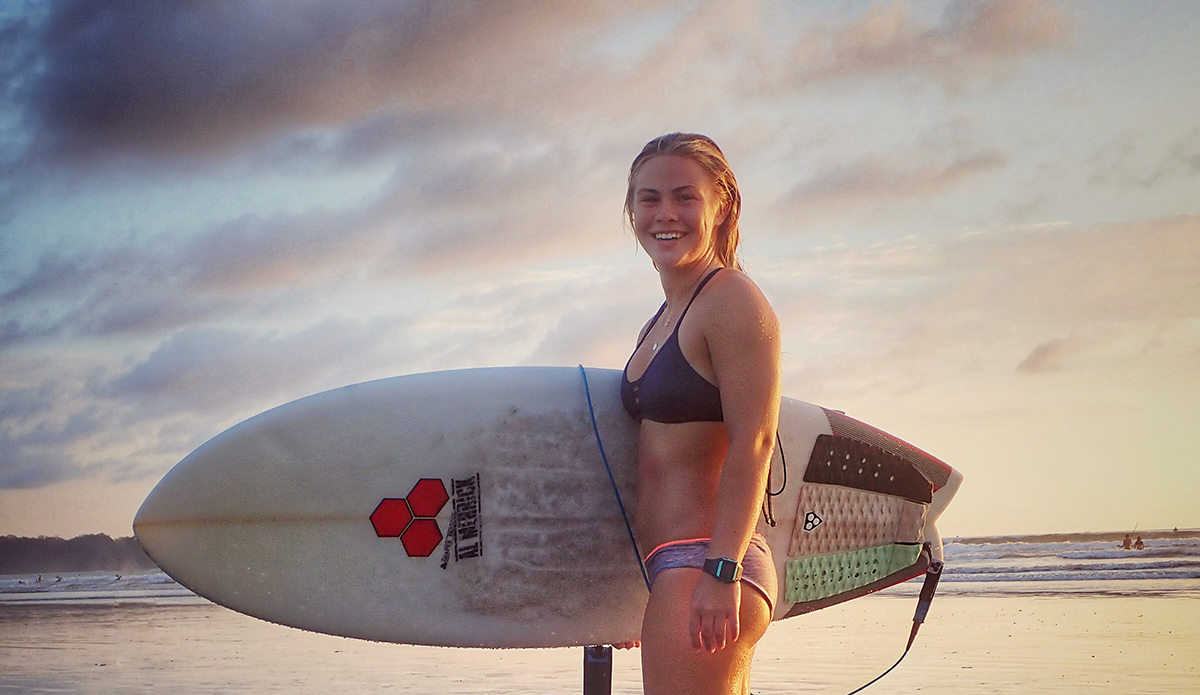 Let’s take a snapshot of the United States today. It’s home to a complicated political climate, a land of less opportunity and more crowded lineups along the coasts, an expensive lifestyle for the middle class but not so much for the poor, and often, a lack of respect for women. Is the United States of America the place to be for a young woman who is passionate about surfing?

According to Olivia Abry, not really.

Olivia is a Boston native who loves surfing. She’s lived in California, spent summers in Nantucket, and graduated from college in Ithaca, New York, all before deciding to leave her home country.

When Olivia received a job offer as a real estate agent in Nosara, Costa Rica, she jumped right on a plane. “Costa Rica is a very friendly country,” she says, “and Nosara, where I live now, has a lot of feminine energy. The ocean is friendly here with a soft high tide wave that become more and more performing as the tide goes down. There are a lot of women in the water. Many more than I have ever seen in any surf spots in the US.”

With a brother working as a surf instructor in Costa Rica and another in Guatemala a few months each year, the decision to leave was not as difficult as others. Even so, a young woman chasing the dream to surf every day and build a career was once a dream reserved for landing in sunny California.

Nowadays, more and more people are choosing to follow their dream life outside the US. Olivia is not the only one that I know doing this. My expat friends are successful business people, fashion designers, consultants, jewelry makers, yoga teachers, life coaches, and motorcycle riders, amongst others. A lot of them are women, and all of them decided to live abroad.

Olivia still uses a lot of her “gringo” connections to make a living here. Most of the real estate around the beaches in Costa Rica is bought and sold by Americans, Canadians, and some Europeans. She is working for the local ReMax office, and she is in contact with foreigners and expats constantly. “I still feel that the energy here is very different from what I left behind,” she says. “There is more of an international crowd, diluting the American style, and enlarging the culture. As I said before, there are a lot of women here attracted by the soft energy of the town. Nosara is centered around wellness and well being, lots of yoga, physical activities, and of course, surfing. It was named one of the top 10 surfing destination to invest.” As a proof of her words, the surfing school where her brother works is partially owned by women and it is booked solid for a year in advance.

Costa Rica is not without issues, though. The dirt roads and the most diversified amount of bugs and critters of the world might be a deterrent for some. There is a definite discrepancy between the lifestyles of local people and expats. There are no hard feelings, though. The Costa Rica locals (aka Ticos) are some of the friendliest I have ever met on my travels. It is also a country with no army and 100% renewable energy — another dream that somehow escapes the US.

I personally have been to Costa Rica many times and I love going back there. Warm water, waves for any level, good food and definitely a comfortable and easy place to travel. Costa Rica is a growing country with some luxuries lost in the U.S., one of those being good waves with friendly people. I have lived and surfed in Rome, New York City, and Los Angeles and look at the wisdom of youth. In this light, Olivia seems to have made the right choice for herself.