With the Season Upon Us, Here’s a Perfect Way to Shut the ‘Medina Interference Loophole’ 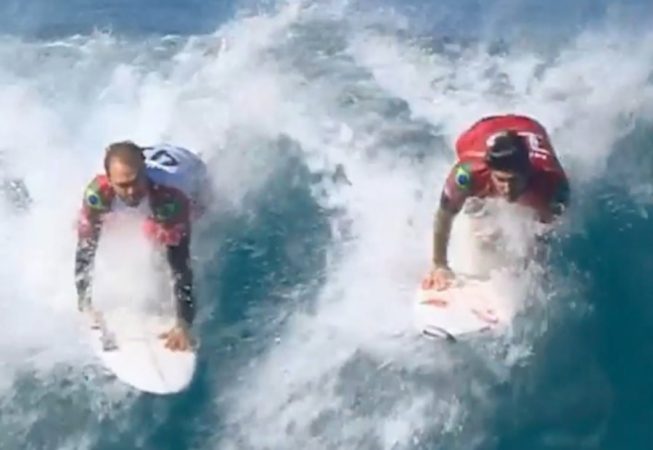 Loophole closed: awarding Ibelli a 10 would have solved the problem. Photo: WSL

Every surfer has been burned before. Most just blow it off and move on to the next wave. However, it’s quite possible that nobody has been burned harder than Caio Ibelli was during the 2019 Billabong Pipe Masters.

Remember the burn heard ’round the world last December? In what quickly became an infamous and widely debated piece of strategy that will linger into the start of the upcoming season when we kick off at Snapper Rocks in a couple of weeks, Gabriel Medina intentionally dropped in on his countryman in a calculated effort to seal his Round of 16 heat win. Medina was flagged for interference, but it didn’t cost him the heat. Medina knew that his combined score was high enough to beat Ibelli even if he had to lose a wave because of the penalty in the waning moments. And if you remember right, the two were also involved in a priority dustup in October during the MEO Rip Curl Pro Portugal after Medina dropped in on Ibelli, losing that matchup. A real head-scratcher.

Preventing this from happening again is really quite simple in my mind: continue to penalize the surfer dropping in by taking away a score, but in addition, give the surfer who was burned an automatic 10 for his or her ride in which the foul occurred. It follows the spirit of the current rule in that it’s backbreaking for the offender, and it also removes any incentive for a surfer to break it intentionally. Nobody can predict just what a surfer would have done on a wave they were deprived of riding, so awarding them a 10, while wildly optimistic, is not wholly unrealistic. Again, the current rule is in place to strongly discourage interference, and this new amendment would shore up what it failed to accomplish.

The current interference rule employs a stiff penalty: the offending surfer sacrifices one of their scoring waves, enabling them to count just a single wave toward their total heat score. This is almost always enough to essentially guarantee a heat loss for the flagged competitor, but Medina found a loophole in the system at Pipe and exploited it and other surfers could too.

A lot of people had a problem with Medina’s antics, while others respected his gamesmanship and unrelenting will to win. Regardless of where one might stand, the hole in the interference rule was blown wide open and should result in a change to prevent similar shenanigans in the future. I can’t imagine the WSL wants to see another intentional burn, and the league was probably ecstatic to dodge the bullet of Gabe winning his third world title the very same day of the incident. Implementing this new way to penalize the infraction would solve the problem.

The math works and it takes away any incentive to break surfing’s cardinal rule: don’t drop in on your fellow surfer. Loophole closed. Tell me if I’m missing something.