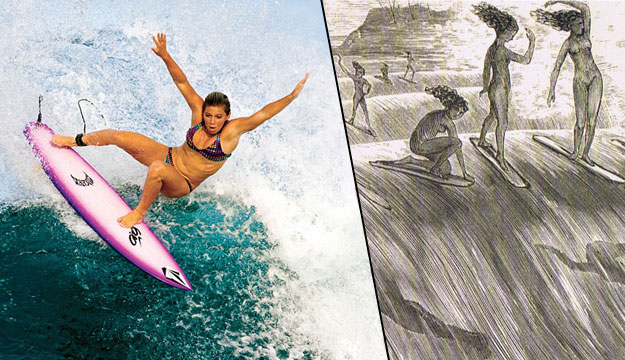 In many ways, this new cohort of talented female surfers is drawing us closer to surfing’s roots and identity, one where women surfers were more dominant. Photo: Nike 6.0/Kenworthy (L), Maids on the Wave by Wallace Mackay (R)

Carissa Moore, Coco Ho, Malia Manuel, and their peers of the recently dubbed “womentum” generation are indeed bustin’ down the contemporary surf world’s gender-biased doors. But when looking into the deeper annals of surfing history, we learn that this feminine uprising is less revolutionary than perhaps presumed. In many ways, this new cohort is drawing us closer to surfing’s roots and identity, one where women surfers were more dominant.

Ancient Hawaiian mo ‘olelo (legend) offers a window into surfing’s antiquity, and while researching these ancient records for my book, I was delighted and intrigued by the wealth of under-explored narratives encircling female surfers. While many Hawaiian legends emphasize surfing chiefs, gods, and other men, women are the star characters in the majority of Hawaiian surfing mo’olelo.

Female surfers like Kelea, Laieikawai, Kailiokalauokekoa, Kapo’ulakina’u, and many others are central characters in epic legends from centuries ago. Ranging from just a few pages to svelte epics, stories of such women made a prominent mark on Hawaiian society for generations.

Female surfers are celebrated as empowered people in the waves. While women like Kelea are remembered for their grace, style, and dominance in competitive surfing, others were known as bold and powerful surfers—even regulating men in lineups. For example, in both the stories of Hi’iaka at Kahana Bay, and Kapo’ula at Makaiwa on Kaua’i, these women inflicted mortal vengeance on male surfers who disrespected them in the surf.

Although these particular historical figures were beautiful women who surfed with little to no clothing, these stories do not simply convey them as objects of male sexual desire. Mind you, there are no pictures accompanying these ancient entries of female surfers. Instead, the stories portray them as agents in history, women remembered for their surfing abilities, prowess, mana and character.

So what happened? While many Hawaiians maintained their traditional notions of gender roles in the late 19th and early 20th century, many others adopted Western cultural norms that dictated “proper” behavior for women—and surfing, particularly, was determined un-ladylike. Not all women complied with these new gender expectations, but it still created a dilemma for many Hawaiian women, as seen with Princess Ka’iulani. Furthermore, as Hawai’i increasingly became driven by tourism, marketing entities faced the challenge of assuring visitors that Hawaii’s natives were safe and accommodating hosts, and so they marketed the islands with myriad images of passive, lifeless, scantly clad native hula girls. Next to such imagery, the historical reality of empowered female surfers became nearly invisible. And yet today, thanks to contemporary female surfers (including modern pioneers like Rell Sunn and others), we are beginning to see a restoration of surfing’s true roots.

For more on this topic and others in surfing history, check out Isaiah Walker’s new book Waves of Resistance: Surfing and History in 20th Century Hawai’i.