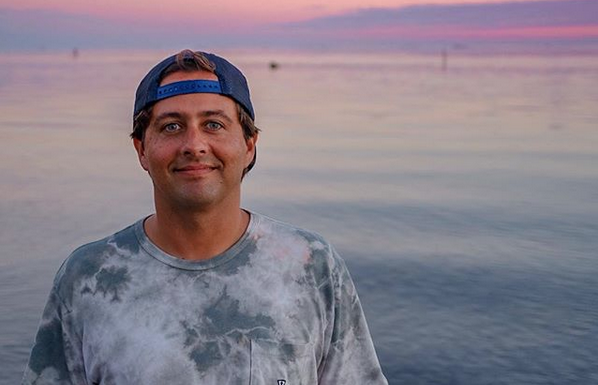 The seas in front of Kamehameha Highway traversing Oahu’s iconic North Shore are angry. In fact, they’re mad as hell. The winds are whipping, making the significant surf just a tad bit dangerous. Rain lightly patters the Billabong tent setups and it suddenly feels like winter in Hawaii. With the trials called off today for the Pipeline Masters and the surf frothed up like a mocha, there isn’t much to do but talk. So I caught up with one of the sport’s best at doing just that: WSL lead play-by-play announcer Joe Turpel. After more than a decade on the call, Turpel has pretty much seen it all, and his attitude is always refreshing in the sometimes-cynical world of riding waves. In a wide-ranging chat, he gave me insight on the grind of living the dream, his critics, the machine that is Medina, John John’s injury and more.

You have a pretty sweet gig. But from the outside, it does come off as a bit of a grind.

Traveling is something you definitely have to get used to. For me growing up surfing Salt Creek and Trestles and Santa Barbara for college, I was saving up money for surf trips. When I got the job on tour, I was like okay I’ve got to learn how to stay on the road for a while, take care of myself. It’s a total dream and you have to be ready to be gone for quite some time and get used to airports and learn to enjoy that side of the job.

How does it work with a family?

I’ve got a baby girl who’s a year and a half. That’s been really fun. Suzi (my partner) has two older girls as well. I’m the only guy, holding it down. They’re incredible. And luckily enough we plan ahead: everyone came to Australia with me and Europe, the Surf Ranch, the U.S. Open. There are a couple of events a year I’ll just do on my own. But on long tours, I’ll drive a mom van around with the family. It’s so good to have them with me. I got to go home in France and the baby blanket is laid out and my daughter is like, ‘da, da,’ when I opened the door and I just thought, ‘this is cool, I’ve got everything I need.’ You have to be able to plan it. Traveling is expensive. But when you can pull it off you get to share this amazing world with them. It gets me off the beach and seeing other things. You drive through Spain with your family and all of a sudden you have all these memories. It’s awesome.

My baby girl calling a few runs yesterday. Cozy is excited for finals day at the Surf Ranch Pro presented by @hurley 📷 @ronnieblakey_

Surf fans can be pretty finicky. The WSL is in this place where they’re trying to reach a broader audience, which can tear at the core. How do you guys handle that internally?

It’s a great topic. When I first got the job, I realized there’s no safe place in the media, even The Inertia. You know you can read something about yourself and be like, ‘I disagree.’ You have to have thick skin. You put yourself out there. If you’re really proud of the work you’re doing, you learn how to go through the ebbs and flows of that critical voice (out there), that can be really small. I’ve been doing it for a decade now, I honestly don’t feel it. But it’s taken me a while to get here. In the beginning, I’d read a comment and I’d be like, ‘whoah.’ And I’d be deflated. Even if it was like 10 seconds. There was finally a time where I realized, gosh, you want to live and die by your own sword, and trust what you’re doing and believe in what you’re passionate about. There are a lot of people out there who want to get a reaction out of you or could just have a small mind and see a big dream or movement as something to be scared of. You learn how to separate yourself from the negativity or critiques that you really don’t need in your life. It takes practice with how reachable we all are in this social media world.

Was there a moment where you were like, ‘that f****** sucked.’ But maybe it actually helped you?

There was a moment, it was so funny. There was this online vote—gosh this is going way back— where it was ‘who are the best surf commentators,’ and my friend tagged me in it. And at the time I was just sort of staying off stuff and not reading too much into anything. He was like, ‘vote for my friend Joe, he’s the best.’ Just a good buddy. All of a sudden I clicked on it like, ‘what is this,’ and the comment field was like a war zone. At that time, it was fall in Portugal, I couldn’t change my flight, all my fellow commentators got flights out. I was alone and just had time to think about it. I think that was a turning point. I think it even started to rain. And I just had to laugh it off. I remember getting on the phone with my sister and it just became so light. Looking at the big picture it taught me a lot to trust what I believe in and remember why I got into it in the first place. You’re always going to have people that try to reach you in negative ways. You see it happen to people who get way more attention than me like with Kelly (Slater). Just learn to trust what you believe in. Take feedback from the right people. My job when I first got it, people would be like, say this or don’t say that, and I was lucky enough to have people like my dad to get feedback and constructive criticism from people I trust. Judging the source. That was important for me to learn.

Who’s your pick at Pipe?

First of all, this is my favorite event on the calendar by miles. Just the energy you get from this place. I’ll never forget walking up the tower to call my first event here because of situations we’re in now. The wave itself being so powerful and deadly and scary and beautiful at the same time. Having guys like Gabriel Medina who can control his destiny with a pretty solid lead to make it number two. Going against Filipe and Julian. They’re the guys you’re waiting to take the throne. It’s their turn, maybe. But for how good Medina is it’s crazy it’s been four years since that first title when he was 20. The way he surfs he should have more. No one will flinch if he clinches. All the momentum is telling us he will. Just the lead he has, so it’s hard to get past Medina to win a second world title. For the event win there seems to be a lot of new faces at Pipe. Especially with this swell direction which means a lot of Backdoor. I think it could be another year where we see a couple of underdog stories like Kanoa Igarashi a couple of years ago. A few new names will enter the list to kind of change those usual suspects. Before John John pulled out I was like okay, he’s coming back to win this thing. The Kelly factor is always going to be huge. I feel like Medina will clinch but there will be a couple surprise spoilers.

Feeling really good to get back in the water the last couple weeks.  I think I’m close to 100%, but I'm not there yet.  I noticed this week that I still don’t have full trust in my movements, which has always been my test for returning to competition. The Pipe Masters is my favorite contest on tour so it’s a really difficult decision, but I am going to withdraw from the event. Wishing everyone luck out there!! It has been insane watching everyone send it during this last swell!!

So speaking of John John Florence. He pulled out of Pipe with a ‘slight ACL tear.’ Not many people in many sports can get through that? Do you think he has surgery?

I was just talking to Potts (Martin Potter) about this because he delayed his knee surgeries in his career and surfed injured. After he got both of his knees fixed when he retired he said all of sudden he was surfing better than he’d ever surfed before and he wished he would have done it while he was still fighting for titles. Yeah, it’s a unique question. John’s still so young.

Yeah, it sounds dangerous. It’s probably a good sign that he did pull out. If it is that bad with an ACL, it hasn’t been that long if he’s choosing not to do the surgery. That’s a tough question. I’m sure he has every amazing opinion in his corner and all the best doctors to work with. If it’s going to happen he’ll probably make that decision pretty soon.

Learn more about Joe’s career arc, here, and look for more Pipe Masters coverage from The Inertia this week.