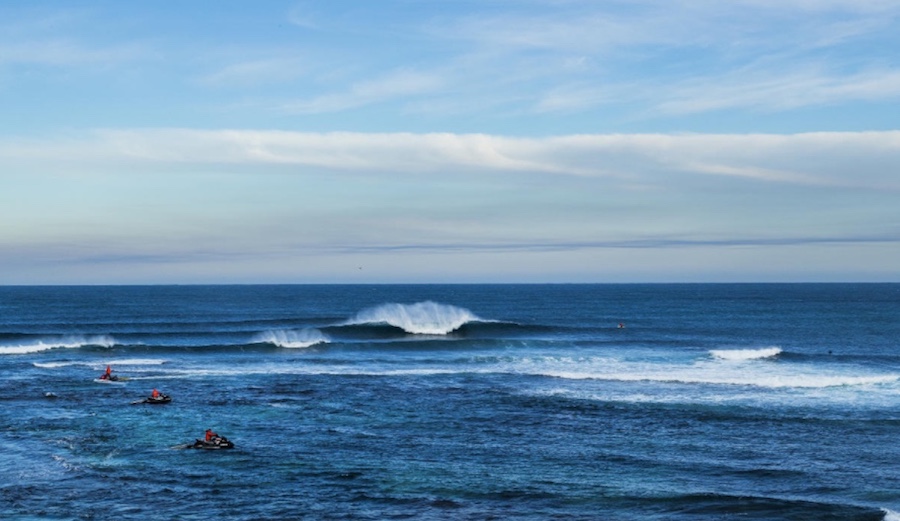 Conditions were 6-8 occasional shark on Monday at the Margaret River Pro, prompting the WSL to call off competition on Tuesday. Photo: WSL/Cestari

In a 24-hour span, two separate shark attacks occurred near Gracetown in Western Australia on Monday – a stone’s throw from the contest site of the Margaret River Pro (see here and here). It prompted a brief hold on competition, but after consulting with local authorities and athletes, the WSL decided to resume competition.

“After discussing with local authorities, the Water Safety Team and surfers,” said the League in a statement on Monday, “the WSL Commissioner’s Office has decided to resume competition for the Margaret River Pro at Main Break at 10:40am, following a one-hour hold prompted by reports of a shark incident at Gracetown – approximately 15 kms away from the event site. Surfer and Staff safety are top priorities for the WSL and when competition resumes, further enhanced safety measures, including ski and drone presence, will be added to the event’s mitigation protocols. We look forward to a great completion of the event.”

It’s unclear if the fact that the multiple attacks dominated headlines in Australian, European, and American press prompted the League to revisit sending athletes in the water so shortly after multiple confirmed attacks. Whatever the case, the League released a statement on Monday (Tuesday in Western Australia) calling off competition for the day pending further evaluation.

“The WSL continues to assess the current situation at the men’s and women’s Margaret River Pro where there have been two confirmed shark incidents near Gracetown in the last 24 hours,” said the WSL in a statement. “We have actioned our well established safety protocols and are gathering all the latest information to determine next steps. We will continue to liaise with all involved, most importantly the surfers, their safety remains paramount.

“Today’s competition (Tuesday in Western Australia) has already been called off and all surfers have been advised not to surf in the area. We are constantly evaluating the situation, and will update as soon as possible.”

The WSL did not immediately respond to The Inertia’s request for comment regarding its “well established (sic) safety protocols.”