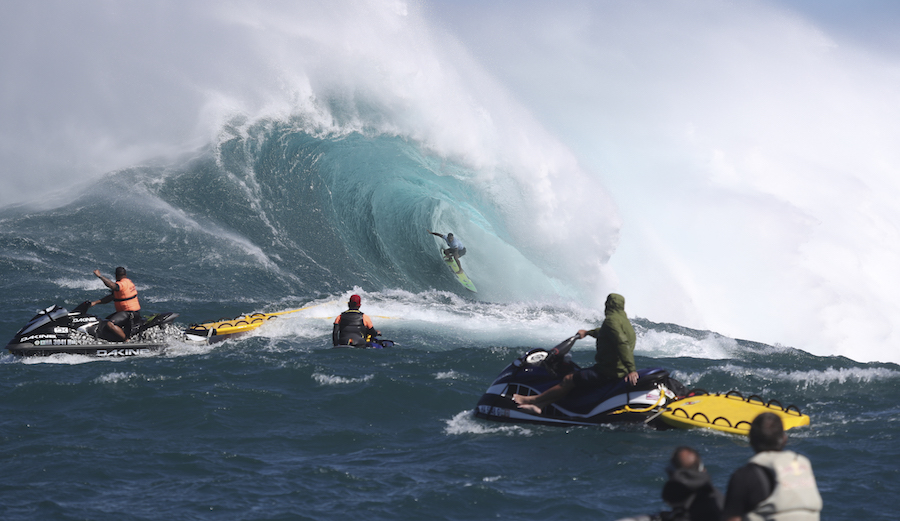 “The partnership with cbdMD marks the biggest deal in WSL’s big wave history and WSL’s first-ever CBD sponsorship,” the WSL explained in a press release.

For anyone paying attention to the legal weed industry these days, the move makes sense. Many companies from CBD-specific ones to others peddling everything from edibles to vape pods are awash with cash from investors hoping to make money hand over fist in this new frontier. And while the claims many are making about CBD products specifically have yet to be backed up by rigorous clinical trials, many action sports athletes have taken to using CBD oils, tinctures, and the like for recovery and other health and wellness benefits.

In other words, that a CBD company would sponsor a big wave event in 2019, a time when weed is more socially acceptable than ever, isn’t exactly that groundbreaking. But, the subtext of the move is that the League now openly allows its athletes to use CBD products – if they didn’t, having a CBD company as a title sponsor would make for an awkward fit.

As it happens, as of last June there was still quite a bit of confusion among athletes around the permissibility of CBD products at WSL-sanctioned events. When The Inertia contributing writer J.P. Currie examined the World Surf League’s drug policy last year, multiple attempts to clarify the League’s stance on CBD were not returned. Furthermore, a few athletes polled back then expressed confusion around the issue. “I don’t use CBD oil, but I’ve seen other athletes using it, so I’m not very aware of the leniency on those products,” said Tatiana Weston-Webb. While Conner Coffin and Zeke Lau both said the League expressly permitted the use of CBD.

Now, according to a spokesperson from the WSL, the League’s official stance per World Anti-Doping Agency guidelines is that, “athletes who wish to use CBD must ensure that any CBD products they use do not contain any THC.”

The change of heart – or, at least, the willingness to expressly address the permissibility of CBD products even though WADA removed them from the list of prohibited substances in January 2018 and we prodded the WSL in June 2018 – is more than likely due to the passage of the 2018 Farm Bill late last year. Not to get to into the weeds (no pun intended) but the bill effectively made hemp and its derivatives – like hemp-derived CBD – legal nationwide as of December 20, 2018.

“The 2018 Farm Bill federally legalized the growth, production, and sale of hemp and hemp-based CBD with a THC level of less than 0.3 percent,” said a WSL spokesperson, “cbdMD products meet these guidelines with batch-specific, third-party lab testing verifying their products are THC-free.”

In accordance with WADA restrictions, the use of natural and synthetic cannabinoids “such as cannabis, hashish, and marijuana,” is still prohibited in competition, though not necessarily outside of competition.