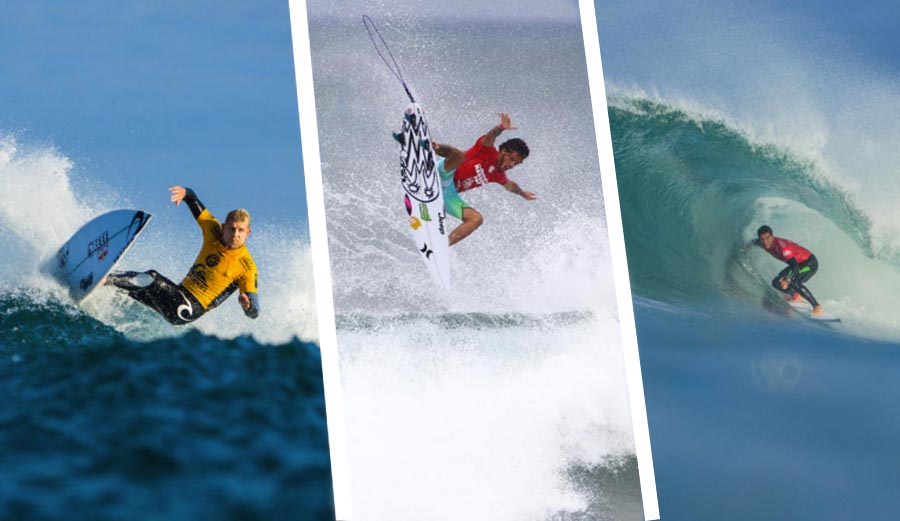 Mick Fanning, Filipe Toledo, and Adriano de Souza are all vying for the title…but how do you break down everyone’s chances? Photo: WSL

If you’ve been following the World Championship Tour at all, then you’re well aware that this year has been quite the nail biter. Aside from high-scoring finals (Filipe Toledo in Portugal) to highly-publicized drama (Mick Fanning’s shark scare), 2015 has been one of the most closely competitive years to date. And as we head into the final stop, the Billabong Pipe Masters, seven surfers remain in clawing distance of the World Title.

Mick Fanning, Filipe Toledo, Adriano de Souza, Gabriel Medina, Owen Wright, Italo Ferreira, and Julian Wilson are all vying for the top spot. To break it down, to make the numbers easier to comprehend for average, mathematically-challenged folk, the WSL has provided fans with a nifty “World Title Scenario” generator. With this, you can enter hypothetical results for the top seven competitors in the Pipe Masters and see how the whole thing might play out.

The only thing is, it’s still incredibly confusing and there are a hundred different possible outcomes. I mean, it’s nothing compared to sitting down with a spreadsheet and an abacus, or attempting to predict the future via crystal ball or black magic. But still, the whole numbers game is more than myself (and many others, I hope) can comprehend. Nonetheless, here’s the very basic info, mainly surrounding the number one spot, that I was able to figure out before I started losing my mind:

If you must know the actual breakdowns, with all the possible outcomes, there are complete lists out there on the Interwebs (aka “Cheat Sheets”) that a simple Google search can locate. But wouldn’t it be better to just watch it all unfold in front of your eyes? Instead of obsessing over nonsense numbers? Unless you’ve got the big bucks riding on your Fantasy Surfer League, that seems like the most sane thing to do.