Compromise. Life is littered with it, often forcing us to concede the things we love for the things we vitally need. Cruel, ain’t it? For surfers, the cruelty of compromise is often accentuated by the fact that we “need” what we “love.”

As Laird Hamilton’s superhero wife, Gabrielle Reece, once hilariously proclaimed, the intense frustration Laird feels when the waves are small is akin to being a dragon slayer when there are no more dragons. While we aren’t all looking to slay the metaphorical dragon, this analogy helps drive the point home. A surfer needs his or her surf, and all too often “real life” rears its ugly head and demands we compromise.

Well, we at SurfScholar say compromise be damned! Mixing adventure, cultural exploration, endless barrels, and affordable education was the formula used to actualize this dream in sunny Lisbon, Portugal. 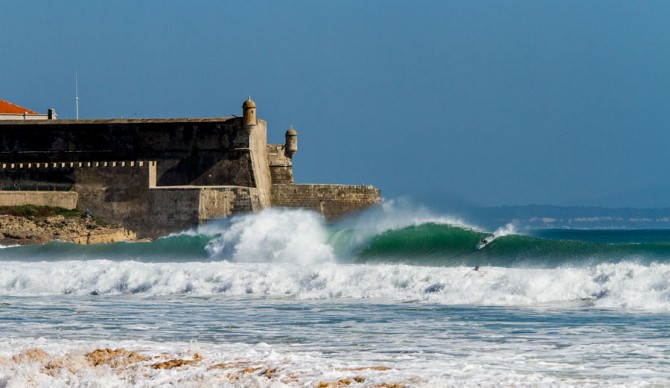 What first drew me to Lisbon was the quest for a lovely city with good universities and even better waves. What I found, both in the city and the surf, blew my expectations out of the Pacific water and planted them firmly into the Atlantic. I was hooked. This was several years ago, and unless you have been chilling underneath an internet-less rock, you too must now be aware of the truly world-class wave situation over here.

Now, being at the tail end of my master’s degree here in Lisbon, my brother Simon, my classmate Toby and I decided to give back and help shepherd other haters of compromise here to Lisbon to be both productive and score the waves of their lives. Whether you are looking to get a quality degree for a fraction of the price of what it is in your hometown or simply looking to become an accredited English teacher able to work and shred anywhere in the world, SurfScholar has got you covered.

While I could harp all day about the splendors of life in Portugal, up-and-coming Portuguese surf stud Frederico Morais hit the nail on the head in a recent Stab interview. “It’s like California with less people, better food, less plastic, less crowd, and less fake,” said Frederico. “It’s like a big neighborhood and that’s sweet. It’s in Europe, which means you can enjoy an enormous variety of cultures in a couple of hours. Also, Portugal is cheap and there’s no violence, no danger, no terrorism, and that’s probably the best thing ever. It’s a good place, to say the least.”