Harness the Wind: Learning to Kitesurf in the Canary Islands 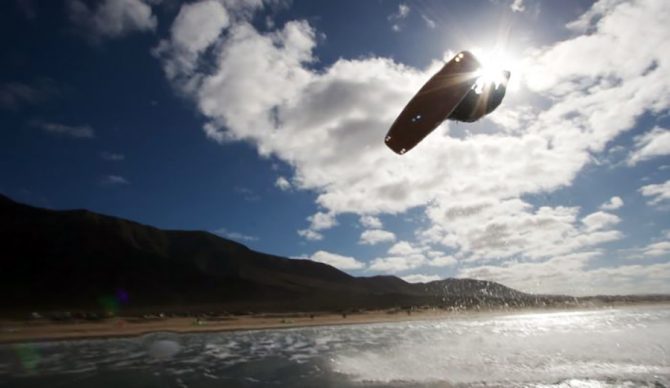 What I thought I’d look like when I told people, “Yeah, I tried kitesurfing in the Canaries.” Sadly, not the reality. Photo: Lanzarote Kite

Wind is an incredible thing when it comes to playing outdoors. It creates waves far out in the ocean, whips up snowstorms in the mountains, and provides raw power for the entire category of wind sports such as kiting, windsurfing or sailing. Despite my strong affinity for surfing and skiing, I’d never tried kitesurfing (also called kiteboarding, but I’ll be referring to the sport as kitesurfing or kiting here).

So with a week in the Canary Islands I set out to learn. In the Bay Area, where I’m from, wind sports rule, allowing surfers to have fun during the breezy, waveless summer months (along with complaining and anxiously checking the surf forecast). In the hopes of doing more of the former and less of the latter, I wanted to learn to kitesurf. It was a difficult, exhausting, and ultimately rewarding experience. The high-octane power of kiting isn’t for everyone. But harnessing the wind in some capacity (kiting, wing foiling, sailing, or windsurfing) is something I’d recommend to any board-riding enthusiast (i.e., don’t be a snob, looking at you surfers).

The Canaries are actually one of the best possible places you could learn to kitesurf. Especially in the summer when Atlantic trade winds kicked up in the Sahara Desert come howling out of the northeast. My girlfriend and I were staying on the island of Lanzarote, a strange but enchanting landscape where craggy, volcanic desert meets stunning beach landscapes, dotted all over with whitewashed villas and towns boasting incredible wine and seafood.

We stayed in the town of Soo at a lovely bed and breakfast called Oasis Surf House, which has hosted the likes of Timmy Patterson, Alison Teal, and Jeff “Doc” Lausch, among others. With sweeping ocean views of La Santa – Lanzarote’s premium reef slab – from our room, the pool, the roof deck, really the entire surf house, I was itching to get in the water. Two things held me back: first, La Santa is highly localized. Second (and more importantly) there wasn’t much swell. And so, with little in the way of waves, but plenty of wind, I would take my beatings and learn something new. 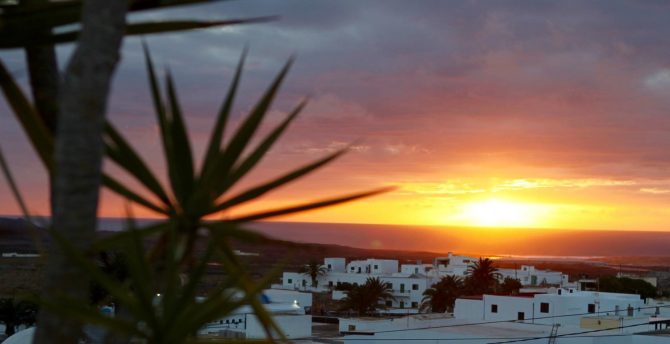 Unlike surfing, skateboarding or even skiing, kiting isn’t something you start without lessons. Like period, end of story, don’t start without lessons. Sure, most people do go the lessons route when trying out new sports (ok, maybe not skateboarding), but the stakes are much lower – I’ve given many half-assed surf lessons myself. (“Here’s how you paddle, here’s how you pop up, don’t get in people’s way, ok lets go get in the water.”) It doesn’t take much to nail skiing basics on the bunny slopes either. (“French fries, now pizza! Pizza!”)

But learning to kite is a completely different story. Not only is there great potential for doing damage to yourelf, but an equal if not greater potential to hurt others as well. And not just others engaged in the same activity but innocent beachgoers  – a problem in surfing we try to avoid by teaching newcomers the golden rule: “Don’t ditch your board!” With kiting, the most difficult/dangerous moments take place on land, getting your kite in the air without subsequently sending it hurtling to Earth at max velocity. Instead of renting gear and trying to make friends and snag a few pointers, I signed up for lessons.

My hosts at Oasis set me up with Ale of Lanzarote Kite, the Lanzarote kite instructor. In the most casual way, he seemed to know everyone on the beach. His spacial awareness and eagle eyes accompanied by a piercing whistle were extraordinary: he caught other kite schoolers in their tracks (not even his own students) before they did damage to themselves or those innocent beachgoers. I quickly realized that if anyone who could get me up in the air quickly and safely, it was Ale. 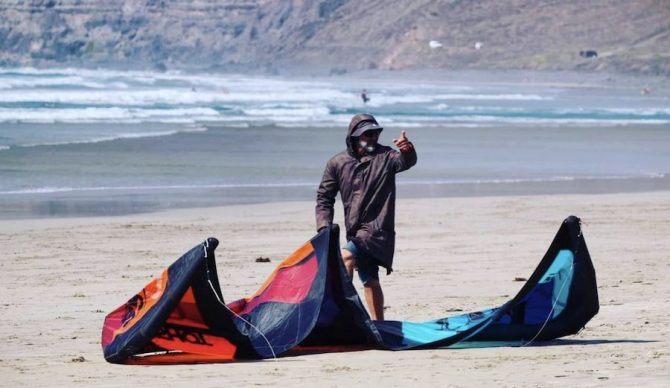 We set out in the afternoon to Playa Famara (Famara Beach) to take advantage of consistent winds and low tide, giving us plenty of soft sand to practice on. I don’t know what it is about the human mind and flow sports, but it’s ridiculous how easy we think it’s going to be before we try, and how hard it actually is when you get down to trying to teach your muscles to perform a set of actions they’ve never done before. Kitesurfing comes at you fast, with much to remember and a lot of quick reactions required in the name of safety. For example, should you lose control of the kite, the counter-intuitive solution is to let go of the bar, which lets out line and de-powers the kite – difficult to remember as you’re in fact losing control of the kite and your body is instinctively trying to hang on.

I came in thinking I was going to be up and riding on the board within the first couple hours and was sorely mistaken. The first day, the furthest I got was the “bodydrag” stage, letting the kite pull you around in the water without a board. Exciting and fun to feel the power of the kite as I drove it back and forth to build speed, but not the high-speed thrill I had in mind when I told myself, “I’m going to learn to kitesurf.” That evening at Oasis I collapsed on a lounge chair with a cold beer, my head spinning with safety reminders, and my forearms sore with a muscle fatigue I recognized from rock climbing.

The next day, we continued with a bigger kite and longer lines (both upgrades in the power department) and once I had done some bodydragging to get a feel for the new equipment, finally, we tried the board. Once again, my stoke and high expectations deceived me. Adding the board into the mix increased the difficulty tenfold. Now, not only did I have a kite to worry about, which often kept my eyes to the sky (a bad habit that I couldn’t stop doing), but now I was fumbling around with an epoxy kiteboard down on the ground as well, trying to get my feet in the straps with one hand and a few fleeting glances. 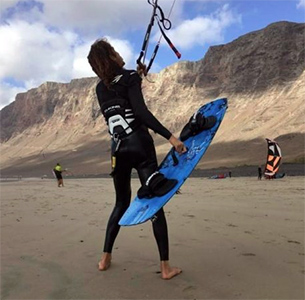 The trick with kitesurfing (and a very big difference from just bodydragging) is that you’re not so much going with the wind, as pushing back against it, digging in hard with your heels like riding your heelside edge on a snowboard to travel almost perpendicular to the direction the wind is blowing. The only problem there is that I’ve never ridden a snowboard. Not even once. And the way the wind was blowing, I had to ride switch for my first tack going out to sea.

At first, I kept digging in my heels too flatly, not giving the board a direction to go and getting launched forward out of my board straps into embarrassing face plants. But, as Ale told me, kitesurfing is all about little “click” moments, where you do something wrong, then come to understand what you need to do to get it right. This was one of them for me, so I tried giving the kite and my board a bit more angle to tack like a sailboat. But with all the new motions, I kept on standing up with the kite and then losing power, bogging my board before I could start really traveling on the surface of the water. Then, my second lesson was done, and I had to run back to Soo to watch the France vs. Portugal European Championship game with friends we’d made at Oasis. 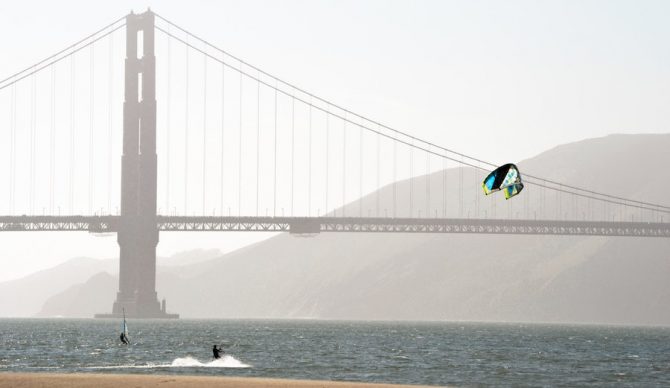 Here’s to hoping this is soon me on a windy day. Photo: Claudia Lorusso

The next day the wind was wrong for kiting, and all too soon we were headed back to mainland Spain before I could really lock in the riding aspect of kitesurfing. All that being said, kiting is far easier to grasp than surfing. Whereas you can spend weeks, even months, of learning to surf before actually standing up and riding down the face of an unbroken wave (what I would consider to be “really” surfing), kitesurfing takes about ten hours of work, more or less, to get to the point of riding a board in the ocean. I took six hours of lessons with Ale and got very close to actually moving in a direction under the kite’s power (what I would consider to be “really” kitesurfing), but I didn’t quite make it before my time in the Canaries ended. But as Ale told me, it’s all about those little “click” moments. I’m hoping I can continue lessons (and maybe get my hands on my own gear) back at home and build on the progress I’ve made. The wind is an amazing thing. I’m hooked.