COVID-Era Travel Has Fueled Frustrations with Vanlifers for Portuguese Locals 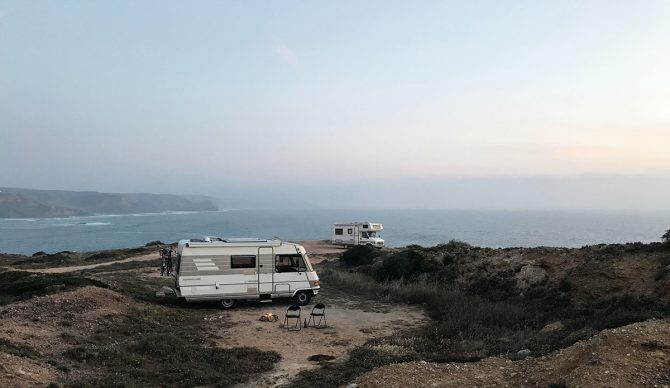 “When everyone is going to the same place to get away, no one’s really getting away anymore,” fellow writer John Rothwell said back in 2018, claiming that #VanLife Has Ruined the Great American Road Trip. The dreamy Instagram pictures of couples parked on beaches have been an easy draw for many, and the same can be said for places like Portugal. The country’s long been a magnet to this type of travel, with its amazing coastline, sizable parking spots, and amazing surf. And to top it off, rules are pretty mellow when it comes to how road trippers are treated by the authorities.

But in times of COVID, things are different. This year’s pandemic has exposed a palpable divide between travelers and locals. Through a three-week span this fall I road-tripped from Lisbon to Portugal’s southernmost point and I saw that everyone — from surf camp owners to experienced surf guides, people running the local cafes and employees of town’s cleaning services — everyone has a renewed perspective on the relationship between adventurists in campervans and Portuguese locals.

In my own observations, here are the locals’ complaints I was confronted with most often:

Haven’t we heard these arguments before? You probably have. Which brings us to the next question: how and why did things intensify this year?

While much of the world shut down at different points in the year, Portugal seemed to be rather liberal in its restrictions on travelers. Foreigners actually seem to be given more freedom than the locals at times, only building new frustrations.

”There have been moments where all Portuguese were told to stay inside but the guys staying in their vans, close to the beach just went into the water,” one local surfer told me in a small bar in Sagres. “Officials didn’t do anything to prevent them from surfing. How do you think we feel about that?”

Meanwhile, with all the stress and losses endured at local businesses throughout the year, residents often noticed that new faces don’t spend their money locally.

“It’s getting busier in the water,” another local named Sergio told me. “As traveling by campervan sounds safer than moving (across) countries by plane, it’s inevitable that this way of traveling is immensely popular this year. And given the fact we are a country where the sun’s still out, the beaches are amazing, and tourists can move around pretty freely, many of them make their way to the Algarve.”

Sergio lives in Arrifana and he is growing pretty tired of the tourists occupying the few parking spots his local surf spot holds. Arrifana is among the 10 spots that make Portugal a surfer’s paradise, and naturally, that attracts a lot of people. ”Especially this year, the water seems busier than ever,” he adds. Sergio knows that many of the beaches and towns do depend on tourists but the fact that they are flooding most of the beaches creates utter chaos in the water.

”I’ve got the idea that anyone from Northern Europe who has (taken) two or three surf lessons in Bali has now rented a campervan to travel the South of Portugal, taking a surfboard and doing whatever they want. It gets pretty dangerous and people are getting more and more frustrated with this type of tourism” Sergio told me.

A surf camp owner from Alentejo told me, “It’s getting insane at all spots where these guys are camping. They leave their trash everywhere but the bin. There’s toilet paper laying around everywhere, pizza boxes cover the parking lots, and I could easily start a second-hand story selling face masks.”

The frustrations of locals are valid, with or without COVID. The tragic irony is that the same trash like toilet paper left behind by visitors will very likely end up in the same ocean they’ll surfing in. But even worse is the impact created after they’ve left, and the deeper it divides them from their local hosts.

The surf camp owner then went on about the amount of physical space vanlifers are taking up in parking lots at surf spots.

“It’s insane. Their campervans — normally not even parked properly — take up three to four spots, forcing me to park down the road, and having my guests carrying their boards down to the beach. This is just rude.”

I don’t believe there’s anyone to solve this all with some codified set of rules. Most of these frustrations are created by a general lack of self-awareness and consideration. The consequences of COVID just seem to have intensified it all. If people take their own and other’s safety in mind, making sure they leave places exactly as they found them, most of the growing irritations of Portuguese locals might fade away. These don’t seem to be inappropriate requirements, rather common sense.