CA Legislators, Activists, and Businesses Are Fighting to Protect the Coast from Offshore Drilling 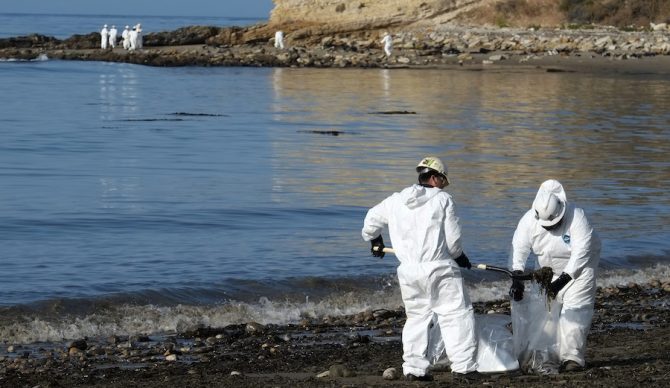 Not a pretty picture. Clean up workers place shovels of oil-laden sand in bags while a larger group of workers begin clean up operations at Refugio State Beach, site of an oil spill, north of Goleta, Calif., Wednesday, May 20, 2015. Due to spills like these, many Californians are concerned about the potential impact of increased offshore drilling. (AP Photo/Michael A. Mariant)

Charter, who was integral in efforts to protect the California coast during the Carter administration, shared background knowledge on Trump’s executive order, important strategies to combat it, and key reasons why the ocean requires our attention.

Invoking his inner Marlon Brando, Charter suggested that given oil companies’ sole focus on their bottom lines, presenting them with an offer they can’t refuse might be the only way to satiate them. In other words, present them with a more lucrative choice than drilling off the California coast.

In his day, said Charter, the Irvine Company successfully thwarted natural gas and oil tycoons from Orange County by arguing that the development of the coast for housing would be more lucrative than drilling offshore. Of course, many environmental activists still see this as exploitative of the coast.

While small, the surf industry has the ability to make a bigger impact, said Charter. For example, the paddle out for Jack O’Neill in Santa Cruz was an event that drew a significant amount of press. A similar display of watermen and women united, paddling for what they believe in would likely have a huge impact, said Charter.

“Images in the public mind are stimulating and remind people how much they love the ocean,” Charter said. “Memories of those experiences are motivators for the general public that now is confronted with an assault on the environment from all directions.”

Congressman Huffman encouraged grassroots action through the formation of alliances, staying vocal and engaged, and also expressed the importance of the legislative fight as many victories have too often required litigation.

“Congress and the American people need to know that Californians will not stand for offshore drilling and other threats to our coast,” said Huffman.

California State Senator Hannah-Beth Jackson explained that she’s proposed several bills in the Legislature to keep would-be offshore drilling at bay. These bills are as follows:

“The bill is key not only to signaling to the Trump Administration that California will not accept any new oil drilling, but will raise the cost of new development to make the oil industry think twice with following through with its efforts,” Jackson said.

SB44: Dedicate state funds, which are collected from the oil and gas industry, to the cleaning and remediating of beaches and coastlines that have been affected by oil wells.

SB465: This bill ensures DOGGR (Department of Oil, Gas and Geothermal Resources) is effectively regulating the efforts of the oil and gas industry. It will require scientific experts to be involved in the committee that has been previously dominated by oil and gas interest groups. This committee advises DOGGR on its activities that include environmental justice and air and water quality.

The briefing serves as further proof that Californians are galvanized to stand up for the coast and do what they can to protect it.