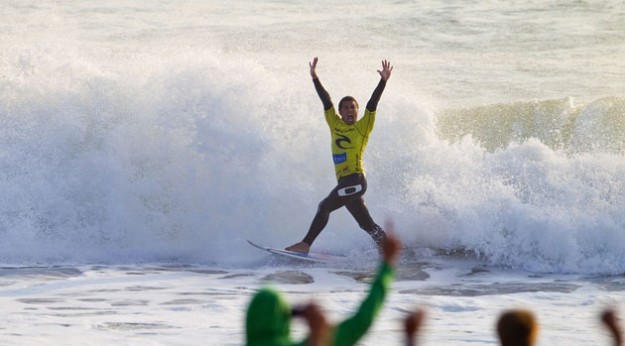 What we should, instead, take from the history of Brazilian society is this: when the bright lights of the international surf media first focused on Brazil in the late seventies and eighties, it wasn’t exactly Disneyland. Pro surfers visited the country more for the parties than the waves, according to Matt Warshaw’s History of Surfing. Those parties could be expected to include plenty of cocaine, willing women and/or prostitutes, and other sleazy elements that accompany drugs, prostitutes, and traveling surfers. So from the very beginning then, we see Brazil established as a dark, semi-dangerous den of hedonism for the white, “civilized” Australian or Californian. This is, of course, is a variation of the way that the first world views all of Latin America, which is, in turn a view that is highly influenced by the history of colonial exploitation in the region.

When Brazilians started traveling en masse, they did so slightly later than the other two main surfing nations and tended to flock to established areas like the Gold Coast, or certain well-trod areas in Indonesia. They traveled in groups because, well, almost everyone travels in groups, and, being from the largest economy in Latin America (quickly becoming one of the largest in the world), they brought with them a certain entitlement that is common to many citizens of countries with large economies.

Americans and Aussies can laugh about the Japanese who tend to shy away from hassling, but the Brazilians not only expect to, gasp, get waves in crowded lineups like their more established surfing brethren, they are also pretty damn good. Crucially, this makes them a threat to the heretofore established, and highly canonized bi-polar surfing world order. As Nick Carroll, who has long pointed out the fallacy of the Australian stereotype against the Brazilians, wrote on a comment board in 2007: “The standard Aussie attitude to Brazilian traveling surfers is incredibly similar to the standard Californian Old School’s attitude to Australian traveling surfers.” He goes to so far as to suggest that Australians overreact to a perceived Brazilian threat because they sense a certain similarity to themselves. Carroll also lampooned this cultural sensitivity in a brilliant satirical piece that can be found here.

At the same time that Brazilians were making their presence felt in international lineups, they were doing the same on the competitive scene. The English speaking media and some of their fellow pros responded with a whisper campaign that has lasted to the present day. “They are small wave specialists or competition specialists.” “They have bad style.” “Stink bug stances.” “No flow.” Whenever a Brazilian did break the mold, like the buttery smooth Fabio Gouveia, he was deemed an exception to the rule instead of a refutation of it. It’s also interesting to note that, often, anything a Brazilian surfer does do well is then used as proof of his inability to do other things. When Jadson Andre began hucking a huge, and rather unique frontside air in competitions, instead of being praised for his innovation, many grumbled that he overused it.

Perhaps the largest sticking point has been over claiming. No professional sport in the world has as much taboo surrounding the acknowledgement of your own prowess as professional surfing. Basketball, tennis, football, soccer…every one of these sports sees more claims in an hour than most surf comps do in a whole season. The fact that Americans and Aussies don’t like to claim and are quietly appalled by those who do is probably a hangover from the predominantly WASP culture that spawned modern (post-Hawaiian) surfing. The fact that criticisms of it should be taken seriously speaks volumes about the anachronistic emotional repression that still lords over surfing.

Finally, talented Brazilian surfers have never had as much access to sponsorship by the large US and Australia-based surfing brands, which has meant less exposure for them in the global (read: English speaking) media outlets and therefore less opportunity for people outside of Brazil see them as dynamic individuals. This isn’t some sort of conspiracy by surf brands, but simply a matter of not having the interest or perhaps resources to identify talent in the Brazilian market– something Rip Curl is obviously trying to remedy by picking up surfers like Gabriel Medina and Silvana Lima.

This is not prejudice for the sake of prejudice, it’s a common side effect of the power struggles between cultures. Surfing, of course, is not a global cold war, but it is an international competition for limited resources and therefore sometimes functions in similar ways. In this sense, the stereotype is a reaction to the implicit threat posed by a) The rise of a new and somewhat distinct surfing culture b) The rise of a developing nation whose global economic clout challenges both the economic and ideological status quo. There are historical precedents for this.  In the same way that the Americans created an image of the Bolsheviks during the Cold War, surfers have established the “Brazzo” as the savage other which helps to reinforce not only our stereotypes of Latin America as a “dangerous” and “uncivilized” place but also our view of ourselves as leaders of taste, style, and acceptable behavior. The constructs of this system dictate that “we” dictate and abide surfing etiquette, while “they” catch whatever they can. “We” are polite and reserved; they are loud and obnoxious. “We” are humble; “they” claim. “We” resolve our disputes in a civilized way; “they” like to fight. You get the point.