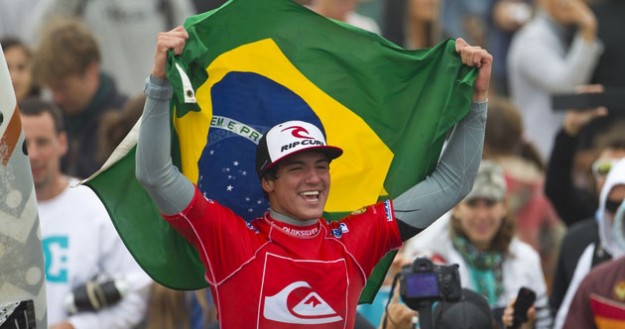 Gabriel Medina has recently emerged as Brazil's trendsetter – a counterpoint to much of the negative press his contemporaries have endured. Gabriel, pictured at his inaugural ASP World Tour victory in France last year. Photo: ASP/Kirstin

There is perhaps no Brazilian who has been the target of as much dislike as Adriano De Souza. For many, he seems to be the embodiment of every supposedly Brazilian shortcoming wrapped up in one small, wiry package, and his competitive success has become the bugaboo of ASP World Tour fans from just about everywhere outside of Brazil.

Although I tend to root for De Souza based on his Rudy-esque, every-man appeal, I’m not, otherwise, a fan of his surfing.  But there are plenty of surfers on Tour who will never have their own profile movie and yet don’t inspire the kind of ire that De Souza routinely receives.  His critics site a raft of reasons, but few of them hold up under the light of scrutiny:  He’s small.  True, but most ASP surfers would have a hard time getting a slow dance at a Bar Mitzvah.  He has a wide stance. So do Owen Wright and even the great Mark Occhiluppo – both of whom are rightly considered very stylish surfers. He has a hunchback. I refer you to Taj burrow.  He claims too much.  If “claiming” in the era of Tim Tebow and Rafael Nadal actually bothers you, you should just stop watching sports altogether.

There is no doubt that De Souza can and does beat better surfers based on the strength of his competitive drive and savvy.  This can be frustrating to watch, but it’s not why people hate him.  No, I think many in the English-speaking surfing world dislikes De Souza because, on a deeper level, it offends our sense of superiority to see a little Brazilian beating our surfing heroes. When Floater Gate erupted last year at the Rio Pro, the Internet exploded with criticism despite similar scoring controversies happening at almost every other large competition. Hovering on the edges of the comment boards was a simmering and ugly anti-Brazilian prejudice that boiled over in diatribes, like one on the Grind TV blog labeling him a “brown midget with a massive under bite” and others evoking the nickname that he shares with Jadson Andre, “spider monkey.”

In retrospect, all of this seems ridiculously over the top, but it’s one year later and little has changed. Every time De Souza breaks the Quarters, as he just did in Rio, the nastiness on the Internet once again rears its head.  The only difference now is, with the emergence of Gabriel Medina, people are beginning to add preambles to their Brazil bashing that will be familiar to anyone who has ever heard a racist joke:  “I like Brazilians but…”  “I think Medina is awesome but…”

One reason Medina represents the exception to “Brazzo-ness” instead of the rule is his sponsorship with a “big three” company. Through ad campaigns, magazine shots, and video clips, Rip Curl has presented him to the public as both a worthy competitor and star material. That is not to take anything from his incredible surfing ability, but to point out that, in the eyes of American and Aussie surfers, he is not really “Brazilian” in the way that they have come to view that country and its surfers. He may indeed be a great guy in many respects and he has benefited from his sponsor being able to present him to the English-speaking market as such. This is a benefit that has not traditionally been enjoyed by many Brazilian pros whose largest sponsors might be Oakley or Mormaii, to name a couple.

Prejudice is the flimsiest of concepts, but the most difficult to root out because it requires a re-evaluation of not only the object of your prejudice, but a re-evaluation of yourself. Surfers are not one breed or culture of people. Furthermore, we do no exist outside the grasp of wider societal norms, perceptions, experiences, and views. We are many different types of people from many different places nominally united by a shared passion. The sooner we can discard the notion that a surfer has to look a certain way, speak with a certain accent, or be from a certain place, the better we will all be for it.