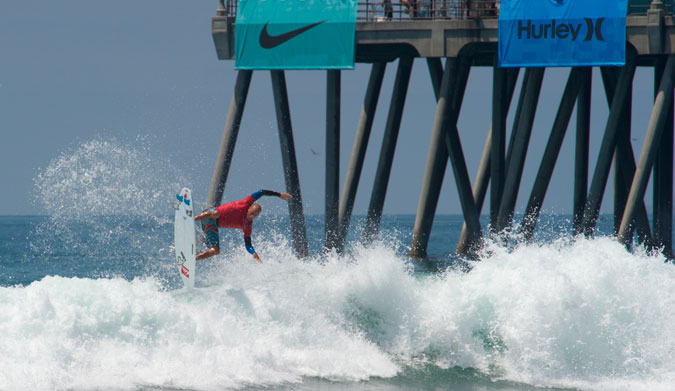 With its mix of surfing, skateboarding and BMX biking, the 2015 Vans U.S. Open of Surfing is billed as “the largest professional surfing competition and action sports festival in the world.” The Huntington Beach, Calif., contest is a significant surfing event for both the Men’s Qualifying Series and the World Surf League (WSL) Women’s Championship Tour. But last year the competition was missing legendary surfer Kelly Slater, who withdrew from the U.S. Open of Surfing because of a shoulder injury.

From July 25 to Aug. 2, Huntington Beach will host 300 surf, skate and BMX athletes during the U.S. Open of Surfing. The event draws more than 500,000 people and brings in about $21 million in revenue, reports the Los Angeles Times. Current women’s ratings leader Carissa Moore is expected to compete this year, but less certain is whether Slater will make an appearance.

Kelly Slater’s Net Worth and Earnings
Kelly Slater became the youngest person to win the Surfing World Championship at 20 years old, and he became the oldest at 39. The superstar surfer built his impressive bankroll with career winnings of more than $3.66 million to date, according to the World Surf League.

Slater has supplemented his net worth of $20 million — according to CelebrityNetWorth — with everything from acting and modeling gigs to endorsement deals. He’s appeared in Versace ads and “Baywatch” episodes, and he had a sponsorship with Quicksilver.

Although he left Quiksilver in 2014 after more than 23 years with the brand and Channel Islands after 27 years, he’ll have no shortage of gear if he competes at Huntington Beach. In April, Kelly revealed that he had invested in Firewire. He also launched his own apparel company, Outerknown, earlier this month.

How Much Kelly Slater Can Win If He Shows Up to U.S. Open of Surfing
Forbes reports that among his other ventures Slater recently invested in Lit Motors, a start-up working to perfect a two-wheeled electric vehicle. And, he backs the eponymous Kelly Slater Wave Company, a company that works to create “a best-in-class surf destination with guaranteed waves.” But, making the trip to Huntington Beach might still be worthwhile for the 11-time world champion.

The surf veteran, now 43, stands to win $100,000 if he takes the top prize at the U.S. Open of Surfing, according to Main & PCH. That’s enough for him to buy more than a few pairs of board shorts — priced at $125 before taxes — from his own clothing line.

This article first appeared on Gobankingrates.com.