5 Surf-Related Television Series This Writer Would Like to See 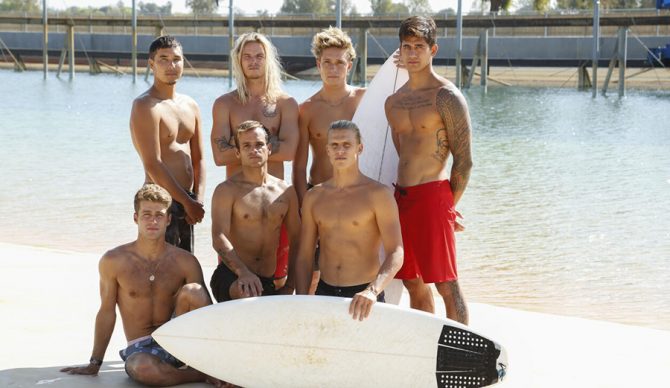 The WSL recently announced it has expanded its partnership with Box To Box Films, the production company behind Netflix Formula One docuseries Drive to Survive. Box To Box Films now has exclusive rights to produce documentary projects for the WSL, as well as the existing Make Or Break, now available on Apple TV.

“This partnership is a full-league deal and gives the team there – headed up by Oscar-winning James-Gay Rees and Emmy winner Paul Martin – the unprecedented opportunity to mine the archives of the entire sport,” Erik Logan said.

ELO’s spot on, it is a huge chance to draw from surfing’s deep, cold, well. So, to broaden our small church, I came up with a few potential TV series ideas. All free, and all ready for transmission. Guys, get your guys to talk to my guys, and let’s make magic happen!

By exploring the emotional and geographical hinterland that lies five miles west of the Superbank we get a glimpse of the pro surfer’s lifestyle as seen through their long-suffering partners. Just what is a push prize worth these days? Where do you draw the line in terms of the number of Jet Skis in the garage? Or the number of garages for that matter

Does what goes on on tour stay on tour? And if it doesn’t, where does it stay? Just what are the transition times for leisurewear, activewear, and loungewear? Cloudbreak without the kids? Or a European road trip? Explosive, sexual, revealing… and that’s just Mick Fanning’s underwear drawer!

Kelly and Pammy: The Bald and the Beautiful

Surfing’s greatest love story has never been told. Till now. Hot on the heels of Pam and Tommy, the TV miniseries that chronicled the marriage and sex tape between actress Pamela Anderson and Tommy Lee, we delve back into the late 1990s. It was a time when Kelly was at his peak, in surfing terms at least, and his relationship with Anderson, aka CJ Parker from Baywatch, made him surfing’s first mainstream star.

Featuring a mix of archival footage (Kelly with hair!), stunning re-creations (Jadson Andre and Tatiana Weston-Webb in truly startling performances), and narration by Joe “Golden Tonsils” Turpel, this series will shed much-needed light on probably the single most important thing that ever happened to surfing.

It’s a well-known fact that 88 percent of retired pro surfers end up being real estate agents (of which 79 percent service the rental and low-end price range of the market). With this talent pool wasting its time slinging condos in California and bungalows in Bryon Bay, we gather five of the best, put them in the Volcom House, and task them with selling Sunset Beach, on the North Shore of Oahu.

Hosted by property mogul Owen Wright, our ex-QS go-getters face not only a high-interest housing market, but staunch, and sometimes violent, resistance from local residents. Who will get the biggest commission, or the biggest beat down in a series that, like sub-prime mortgages, has no real winners?

We send a series of professional surfers to do, like, real jobs. Italo Ferreira does a two-week stint in a chartered accountant’s office in San Diego. Hilarity ensues as the Brazilian fails to learn the intricacies of the tax code and basic spreadsheet formulas. Elsewhere Ethan Ewing does a stint as an off-Broadway makeup artist, Carissa Moore drives a New York cab, Jack Robinson performs open heart surgery and John John Florence teams up with Steph Gilmore to operate the Tweed Bar Sand Bypass scheme. Not so much fish out of water as the unskilled in employment. Life lessons are learned (and discarded), as our heroes come to grips with basic pay, a 40-hour week, and Karen from accounts.