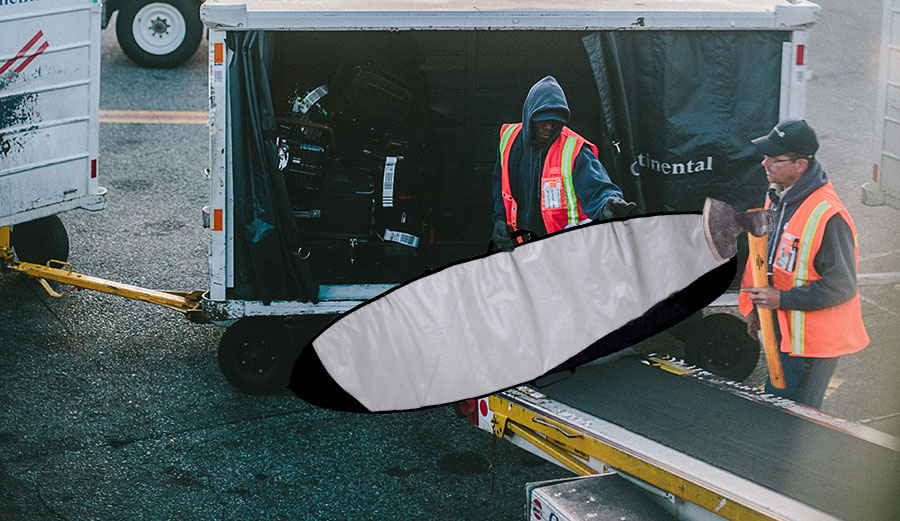 Two members of the KOOK Squad in action.

According to a declassified whistleblower complaint released in early August, airlines have been employing highly trained staff specifically to break surfboards.

“I’m reporting an urgent concern in accordance with the procedures outlined in 48 U.N.S. §5560(p)(7)(A). This letter is UNCLASSIFIED when separated from the attachment,” the complaint reads. “For decades, the airline industry has been raking in exorbitant fees from traveling surfers, and, through the use of the covert ‘Knock Out Our Kooks’ Surfboards (KOOKS)’ program, have been waging a secret war on boards and the people who travel with them.”

The complaint, which validates the suspicions of thousands of surfers, pointed specifically at REDACTED Airlines, which has one of the most intensive surfboard breaking programs in the industry.

“In the course of my official duties,” the whistleblower wrote, “I have received information from multiple U.S. airline officials that the airline industry is using ex-paramilitary death squads to train new hires for the KOOKS program. The training includes, but is not limited to, inflicting rail dings, nose dings, and flat out snapping boards, whether they’re in a hard-shell case or not.”

Over the past decade, a staggering number of surfboards have been damaged by airlines. Some, like these ones, were broken beyond the point of explanation. “I just don’t understand,” a KOOKS victim told The Inertia. “It’s like they meant to do it.” 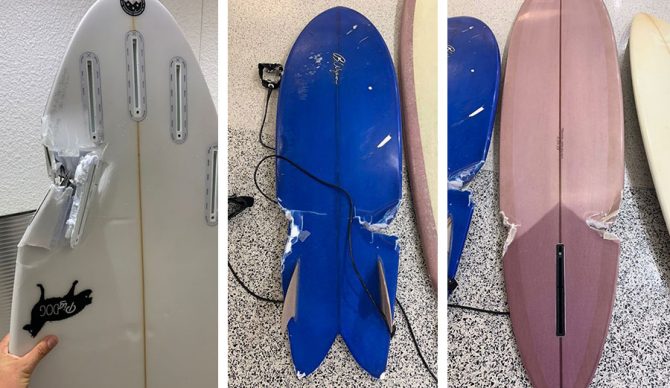 Johnny Boardbreaker (not his real name), is a card-carrying member of the KOOKS program. He spoke to The Inertia under the condition of anonymity. “Yeah, my whole family are KOOKS. My dad, my brother, my younger sister. Hell, even my Grandad was one of the first to go through the program,” he said. “Grandad’s claim to fame is that he broke one of Gerry Lopez’s boards on a flight to Indonesia back in the seventies. He’s got the nose of it on a plaque out in the garage. I’m proud of it. It’s a family tradition. I’ve already got my son out in the garage learning which parts of a forklift can inflict the most damage on a surfboard. It’s a brotherhood.”

Boardbreaker, who completed the KOOKS program training in 2015, says it wasn’t easy. “The instructors are real hard-asses,” he said. “They had us swinging ten-pound sledge hammers into board bags full of surfboards all day. With the new tech coming out, you really have to be on your game. Surfboards aren’t just fiberglass in a cloth bag anymore, so we’ve had to figure out different methods to maximize the damage we can do. You’d be surprised how resilient some of the new surfboards are.”

Boardbreaker went on to say that between him and his family alone, thousands of boards have been destroyed. “I really look up to my older brother,” he said. “We get bonuses if we break a famous surfer’s boards. He recently demolished one certain famous surfer’s boards, and he’ll be able to put his kids through college now. He really gets after it and he does it in really creative ways. He broke Kanoa Igarashi’s boards by inventing an attachment for a forklift that has a flame-thrower and a wrecking ball on it. Real high-tech shit.”

The Inertia reached out to several airlines for comment but, as of this writing, hadn’t received any responses.